An update on the Inuvik-Tuktoyaktuk Highway project 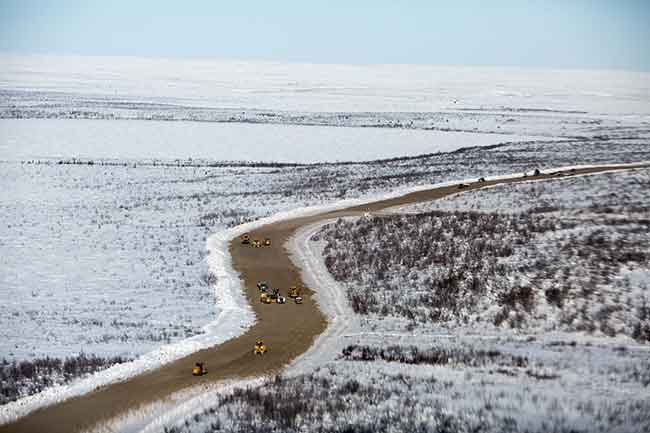 March 29, 2016 – Connecting residents in Canada’s northern communities has always been a challenge. From expensive and unreliable supply chains to a lack of employment opportunities and social, recreational and medical services, remote northern communities have had no choice but to adapt to tougher climates than their Canadian neighbours in the southern regions of the country.

But thanks to the construction of the Inuvik-Tuktoyaktuk Highway (ITH), a project more than 50 years in the making, one community within the Inuvialuit Settlement Region of the Northwest Territories (N.W.T.) will soon be experiencing significant improvements to its standard of living – the northern community of Tuktoyaktuk, which is currently only accessible by airplane in the summer, but is connected by an ice road in the winter.

“When you take a look at where we are in the world, it’s a permafrost area, well above the Arctic Circle and we’re connecting to the Arctic Ocean. Maps around the world only show a couple of other areas where projects like this have been done – mostly Russia – and not for a long time,” explains Kevin McLeod, director of highways for the Government of the Northwest Territories (GNWT). “From a project challenge point of view and from an engineering perspective, it is unique and we are leading edge in terms of design parameters, design criteria and constructability.”

The ITH, also referred to as the “Inuvik-Tuk Highway,” is comprised of three parts: the Tuktoyaktuk to Source 177 Access Road, Navy Road in the Town of Inuvik, and a 120-kilometre section of new highway that connects them. It is a partnership between the GNWT, Government of Canada and the Inuvialuit Land Administration (ILA). When completed, the project will span 138 kilometres within the Inuvialuit Settlement Region. More than half of the span of the highway, 71 kilometres, will run across Inuvialuit private lands maintained by the Inuvialuit Lands Administration. The remaining sections of the highway are on Crown lands, which were maintained by Aboriginal Affairs and Northern Development Canada. The administration duties for these Crown lands were transferred to the GNWT in April 2014.

The design of the highway was engineered by Stantec and Tetra Tech.

The road is being built over a four-year period with the embankment being built over the first three years and the surfacing and finalization being done in the fourth year. This past November marked the second winter construction season for the project.

Supply lines
Being in such a remote area brings a variety of logistical challenges to a project of this magnitude.

“There’s only one road that accesses the site, and two significant ferry crossings that cross major rivers, so it’s an interrupted logistics chain,” McLeod explains. “Obviously it’s at the far end of Canada’s border in terms of distances from the south and other areas of the continent that make construction equipment and materials that support construction activity.”

To ensure they have the proper equipment on site, it is typically shipped to the area 12 months in advance, then stored and protected to make sure that it’s readily available.

“It takes a lot of time from the project staff to look a year ahead and plan for those eventualities,” McLeod says. “But the challenges were not unexpected, we are experienced road builders in the north, so this is obviously something on our risk matrix.”

Permafrost preservation
In an effort to protect the permafrost during the highway’s construction, cut-and-fill techniques that are typically used in the southern areas of the N.W.T. – which involve cutting into protective layers of surface vegetation and organics – have been replaced with fill techniques that involve the insertion of a geotextile fabric between the existing ground and the construction materials along the entire length of the highway. McLeod says protecting the permafrost has presented the greatest engineering challenges for the project.

To protect the permafrost that is used as the foundation for the highway, crews only work on the highway during the wintertime, which comes out to being approximately 160 working days.

“It’s the reverse of your normal construction season,” McLeod explains. “We start during the first part of November and work through to late April or early May.”

There’s also a significant amount of thermal analysis done to ensure the appropriate thickness of the road being constructed.

“Our engineers came up with a range of 1.8 to 2.0 metres in depth, and we are building to that, in terms of the embankment,” McLeod says.

The same but different
Although a unique road building method is being used for the highway construction project, the equipment is fairly standard for a project in the area.

At the height of the construction season the project is operating 24 hours a day, seven days a week, with two crews in
two shifts.

“There are camps that the folks live in,” McLeod says. “The men and women will be out in the field and their rotation is generally up to them, whether it’s two weeks in and two weeks out, one week in and one week out – there’s a variety of packages available for them.”

To ensure that the necessary raw materials are ready to go, the project has identified nine quarries set up in proximity to various aspects of the project.

“As with any project, you want your sources of embankment as close as possible and as efficient as possible,” McLeod says.

Ain’t easy being green
Environmental constraints and commitments have been a major challenge for the construction of the massive highway.

“In terms of the wildlife management, flora and fauna, and the permafrost there are a number of environmental regulatory commitments that are being monitored. “There are 286 commitments we monitor on a daily basis, which is fairly significant,” McLeod says. “It takes a full-time staff to manage them, track them and
report them, and manage the risks on every one.”

Big benefits
The communities within the region are expected to benefit greatly from the construction and maintenance of the Inuvik-Tuktoyaktuk Highway project.

Tourism in the area is also expected to increase due to improved accessibility to the north. The territorial government estimates that tourism will increase by $2.7 million annually and create an additional 22 full-time equivalent jobs in the N.W.T.

Communities connected to the highway expansion are also expected to experience reductions in their cost of livings due to goods being able to be shipped year-round; improved access to health care, educational and economic opportunities; and increased opportunities for family, social, recreational and sporting interactions.

Investing locally
A significant effort has been made on the part of the GNWT to provide jobs to the surrounding communities. Out of the 604 workers constructing the Inuvik-Tuktoyaktuk Highway, more than 75 per cent are from the Inuvik region or other communities in the N.W.T.

“One of the key reasons we undertook the project was to give people experience, and get them work in an area that hasn’t seen work for a number of years,” McLeod says. “We’re quite proud of the numbers.”

There is also a significant training program attached to the project.

“A project that spans over four years ofdfers significant training opportunities for the youth who want to take that opportunity to be trained as heavy equipment operators, administrative staff, welders, cooks, equipment maintenance staff – all the trades that are part of a very successful project.”

To date, the project has trained 120 people as Class 1 and Class 3 drivers and equipment operators, including local workers, apprentices and summer students.

“We haven’t had any hiring challenges on the project, people want to work,” McLeod says.

Another 30 to 40 people have been trained as Class 1 and 3 drivers with air brakes, and additional training has been made available for specific types of heavy equipment operation, such as graders and excavators.

An 11-week workplace readiness program is being run by Northwind Industries Ltd. to help prepare young Aboriginal workers for their first jobs, and individuals who have been unemployed for a significant period of time. The course is run in partnership with the IRC, the Gwich’in Tribal Council, and the territorial and federal governments.

“The hope is that once this project is over, these folks will have competitive skills sets, knowledge and experience so their resumes will be impressive enough that these folks can go out and get jobs with other projects,” McLeod says. “It’s not just a highway project, it’s a significant event in people’s lives in the north that will hopefully help folks in
the future.”