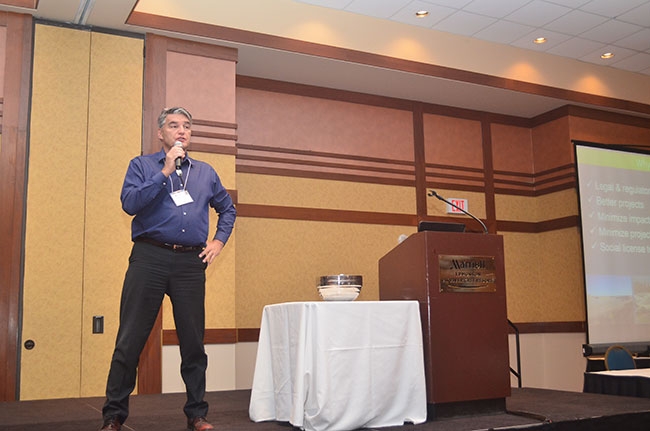 June 12, 2017 – When it comes to starting up new ventures in the aggregates sector, there are many factors that need to be considered to ensure their success: strategic short-term and long-term plans to adapt to ever-changing economic factors, having the necessary capital, hiring the right team, and the list goes on. But there is one key consideration in particular that some companies overlook from time to time, and by doing so, almost certainly leads to costly delays that can spell disaster for a project before it gets off the ground.

That factor is proper consultation with the indigenous peoples of the land a company intends to operate within, especially when operating on Crown lands. Communication and collaboration with those peoples are not just vital for the success of new aggregates operations on Crown lands; it’s also the law.

“It’s the law of the country based on the constitution, which guarantees indigenous rights; that’s first and foremost,” explains Lawrence Aimoe, executive director of operations for the Aboriginal Consultation Office of the Government of Alberta, which works closely with Alberta’s Ministry of Environment and Parks, the ministry responsible for ensuring consultation is done with the local rights bearing communities. “Anytime the Crown is going to use Crown land – and change the face of the land – there has to be discussion with the impacted nations and whoever else holds indigenous rights. So it’s not just First Nations, it could be the Metis as well.”

The main reason consultation is so important is to try and prevent the disruption of a peoples’ day-to-day lives, their burial grounds and the destruction of ancient artifacts.

“Long before gravel was dug up for roads, the roads were the waterways of the country. That’s been going on for thousands of years,” Aimoe explains. “As a result of that, that’s where many indigenous people travelled – not just in this country, but many countries – and as a result of that, quite often encampments or what we refer to as small towns or villages were there. Along with that comes the issues that many villages or places have when you lose people due to age, sickness or otherwise – what do they do with them?”

Many of the indigenous peoples who passed away over the years were buried in the ground close to the waterways.

“Many of the times we’ve been digging into the earth where we’ve uncovered human remains, many of them turn out to be pre-historic,” Aimoe says. “The disturbance of any burial ground is never a good thing. The consultation process can address that… a lot of the elders still carry the knowledge of where people were buried or the meeting places of the nations over the years; and that kind of information obviously would be invaluable to any company that is planning on digging anywhere.”

Digging on private land
Companies planning on starting up aggregate operations on private lands can benefit just as much from the consultation process as those digging on land owned by the Crown.

“Our duty is for Crown land, but in terms of best practices, even when you’re digging somewhere that’s not Crown land it doesn’t hurt to consult with the neighbours to see what you might find,” Aimoe says. “Once you uncover a burial ground that could delay your project for some time.”

When operating on private lands, consulting with indigenous peoples can prevent a variety of delays in an operation. The initial delay that occurs if a burial ground is unearthed is to have tests performed to check if the bones were prehistoric or more recently buried.

“If it’s not recent, then it’s the determination of who the people are and who they belong to,” Aimoe explains, adding that once a site is determined prehistoric that it becomes an anthropological dig. “One prehistoric site uncovered had indigenous people in it from 15 separate First Nations, thus, it required those 15 nations to work with the government to perform ceremony and re-bury their ancestors.”

Building rapport
Even when following best practices, not all situations can be avoided. Sometimes out of ignorance with no malicious intent, workers come across geo caches when digging the land. These are also known as “borrowing man” caches – which have been occurring in indigenous communities for thousands of years – and dispose of them due to their appearance. Aimoe says that some who come across them said they thought garbage was dumped on the site – since more recent caches can have flashlight batteries, gasoline and a variety of other items for people living on the land to borrow so they can get to their destination.

“When you’re doing a dig and your people come across something like that… it’s hard to recognize it as a sacred sight, but it’s definitely a cultural sight,” Aimoe explains, adding that this is a prime example of why consulting with the local peoples is so important. “Disturb a site and it could get you into trouble.”

Whether it is a geo cache or a burial ground that has been unearthed, making the effort to consult in advance of a project’s startup can help build positive rapport with the peoples a company may later need to work with to resolve issues.

Another way companies can build positive rapport with a local population is by offering to make them a partner in a project, allowing them to have some ownership while generating jobs and revenue.

“There are a lot of nations that are able to enter into partnerships like that… you may also uncover some excellent employees for your company,” Aimoe says.

Consult often, and from afar
Sometimes a company is required to perform land consultations with indigenous groups that live a significant number of miles away from a dig site. But there is good reason for this.

“We get feedback from companies that say they don’t understand why they are consulting with a nation that’s a number of miles away from where they are going to dig, but one of the things about indigenous communities is they often move over time to find food, or move because waterways change… there was a very nomadic lifestyle to many of the nations,” Aimoe explains.

One big source of frustration for First Nations communities and other indigenous peoples is when a company drops by a band office for a consultation one day, and never returns to offer updates on a site they could be spending upwards of several years extracting resources from. Consultation needs to happen throughout the life of a project, Aimoe says, especially when it comes to land reclamation.

“When doing reclamation, make sure it’s almost a partnership between the environment folks and the contractor to make sure they get it right,” he says. “The less of a footprint left behind, the better.”

If there’s any one thing Aimoe hopes people take away from this article, it is that it is very important to communicate with the nearby communities before starting up an operation anywhere in Canada.

“It could really delay plans if that constitutional requirement is not addressed – this applies to the whole country. Just be a good neighbour and a good steward of the land.”