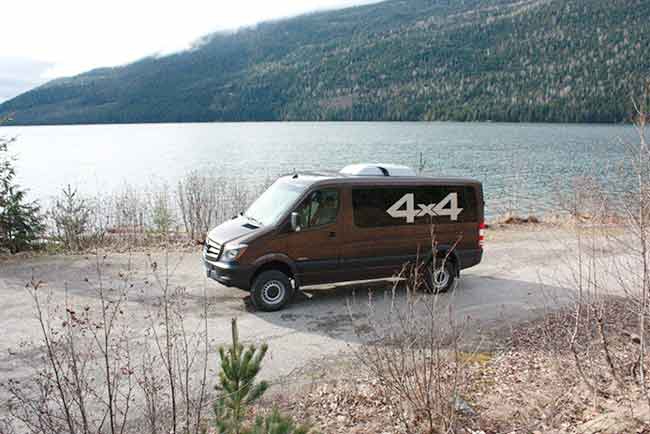 The passenger van version of the new four-wheel drive Sprinter could help larger crews get to remote resource sites with less vehicles.

The resource industry of British Columbia uses a lot of trucks to get its business done. All manner of pickups move men, women and their equipment in and out of primitive, remote job locations. At least that’s how it’s always been; till now perhaps.

For 2015 Mercedes Benz is offering two four-wheel drive systems on their 2500 and 3500 Sprinter cargo van. This move may well change the rough job site transportation landscape.

Moving crews of workers along with all their gear in often foul, nasty weather has been a job that 4WD trucks have always taken on – because frankly without 4WD those trucks are just not getting to where they need to be. The idea that a van could do this job has no doubt occurred to fleet managers and site bosses – particularly in light of the need for large dry, warm spaces – but without 4WD that just wasn’t happening.

Now on some jobs, I’m sure the current crop of vans could manage.  But on the rougher roads, in the mountains, it would be pure folly to expect a rear-wheel drive van to do that job.

Recently I had a chance to see if this MB 4WD could actually handle the work sites of the BC interior. North of the town of Revelstoke, B.C., I travelled an in-use logging road. The terrain was twenty kilometers from pavement to the summit of the operation; with a rise of over 1,000 metres in between. Luckily (or unluckily depending on your point of view), rain and rising temperatures had softened the frozen road surface and created challenging conditions for the Sprinter – none of which stopped it. Except where guys flagged me down to ask how I’d gotten a van that far up the mountain.

The first thing to know about the 4WD Sprinter is that it is a factory designed and built system – this is not an add-on or dealer installed option. The truck comes from Germany already assembled and its specifications include not only the 4WD components but also a lifted body. Up to 3.9-in. (100 mm) at the front and 3-in. (75 mm) in the rear. Suspension is also modified accordingly.

At this point it’s good to note that, for 2015 anyway, the Sprinter is the only 2500/3500 cargo and passenger van (including dual rear wheel) that will offer four wheel drive.

The passenger van version may be of particular interest – certainly to the cutting crews I passed on my climb – as it has comfortable seating for as many as 10 and still offers lots of cargo space.

Both 4WD systems work with a simple dash-mounted push-button. When engaged, the engine torque is distributed 35:65 between front and rear axles. The system adds 271 lb. to the GVWR of the truck.

Called 4ETS, this is actually an electronic traction control system as it has no mechanical differential locks. Certainly this is a different method of getting up the hill. At this point, I was thinking that open differentials in really muddy conditions are not ideal – so why build it this way? In part, the advantage of this system is that it eliminates weight and also the binding that comes with diff locks. As for traction, Mercedes has applied a different solution to spinning wheels common in this situation.

Named AdaptiveESP, this electronic traction control uses the ABS sensors to detect wheel spin and will then brake individual wheels forcing torque back to the wheel with traction. This system is automatic requiring the driver only to keep the accelerator depressed.

While it sounded good on paper, up the mountain, it required a bit of a learning curve. My experience with locked differentials is a constant sense of motion – even when all four wheels are churning – and it’s intuitive to keep the accelerator depressed while those wheels are spinning. However, on the Sprinter I found that on the rutted inclines, as the van began to slip, I’d momentarily loss momentum as the wheels were braked and I’d want to lift my foot. This is exactly the wrong thing to do with the 4ESP/4ETS system. Lift and everything comes to a halt. Instead, wheel slippage is what the computer needs to send the braking command to the churning wheel. So, after a few failed attempts I learned to allow the slippage, the braking and still keep my foot in it. The van slows for a moment, then you feel the brake, then it starts to dig through the slop. It’s this braking of the spinning wheels individually which increases the power to the wheels that aren’t spinning. The sensation is different, but give it a few seconds and it works.

The second 4WD system comes with the low range option. It’s called ZG3. This is a manually selectable reduction gear. The truck needs to be at a standstill for it to be engaged. This feature lowers the ratio between the engine and wheels by about 40 per cent, which then increases the corresponding torque. This option works well in really difficult terrain and at particularly slow speeds.

Another option that can be added to the ZG3 drive train is Downhill Speed Regulation (Code ZH4). Utilizing the low-range transfer case gearing this system is, in effect, a slow-speed cruise control. I had a chance to use this coming down the mountain during my test.

As I said, the logging road I was on dropped over 1,000 meters over 20 km of switchbacks. At least half of the run was in excess of 10 degrees of grade. This system is manually controlled with a pushbutton right beside the low-range setting. Once engaged, the transmission holds the van at a speed between 4 and 18 km-h. The driver can set it by braking to the desired speed and then not touching the accelerator. If the accelerator is depressed the DSR is over-ridden till the accelerator is once again not touched. If the speed climbs above 45 km an hour it automatically switches off.

The beauty of this is that during long, slow descents attention can be focused on steering the best line through rough roads while also saving the brakes.

In all, I spent several hours on logging roads where I never thought I’d be driving a van. It works. Go see for yourself.

The passenger van version of the new four-wheel drive Sprinter could help larger crews get to remote resource sites with less vehicles.

What else is new for 2015?
Sprinter introduces Crosswind Assist. This safety system will always be active at speeds of 80 km/h and over. Using the same AdaptiveESP computer system that brakes spinning wheels to push torque to the 4WD system; it intervenes (with braking) when the track of the vehicle is pushed off course by heavy crosswinds.

Maintenance intervals have been increased to 30,000 km; up from 25,000km. Less time at the dealer equals more time on the job site.

Lastly, though MB is getting ahead of itself, it now makes SULEV engine certification available on its diesels. This design complies with new clean diesel standards that don’t take effect till the 2020’s

As a point of interest, MB says that 75 per cent of all Sprinters are sold will have some type of upfitter modification made to them. To this end they have a program in place to ensure the quality and safety of all modifications by vetting these companies. There are currently over 25 approved upfitters operating in Canada.