News
Changes to LafargeHolcim board of directors 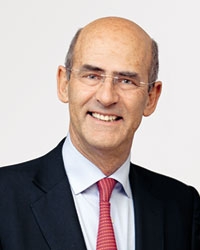 April 11, 2017 – The board of directors of LafargeHolcim will nominate Patrick Kron for election as a new board member at the group’s upcoming annual general meeting on May 3, 2017. At the same time Philippe Dauman and Alexander Gut have taken the decision not to stand for re-election. As communicated earlier, Bruno Lafont, currently Co-Chairman of the board of directors, has also decided that he will not stand for re-election.

“We are pleased to nominate Patrick Kron. He is an experienced leader with an extensive track record in transforming industrial companies. His skills will be highly complementary to the existing knowledge pool in our Board”, says Beat Hess, Chairman of the board of dbirectors of LafargeHolcim. “On behalf of the Board, I would like to thank Bruno Lafont, Philippe Dauman and Alexander Gut for their many years of service and significant contributions to the success of LafargeHolcim.”

All other current members of the Board of Directors will be proposed for re-election at the annual general meeting:

With the election of the nominees, the board of directors would consist of 12 members as compared to 14 today.

Biography
Patrick Kron, French national, born in 1953, is a graduate of the Ecole Polytechnique and the Paris Ecole des Mines, France. He began his career at the French Industry Ministry in 1979 before joining the Pechiney group in 1984, where he held senior operational responsibilities in one of the group’s largest factories in Greece before becoming manager of Pechiney’s Greek subsidiary in 1988. Between 1988 and 1993, Patrick Kron held various operational and financial positions, first managing a group of activities in aluminium processing, before being appointed Chairman and CEO of Pechiney Électrométallurgie. In 1993, he became member of the executive committee of the Pechiney group and was Chairman and CEO of Carbone Lorraine from 1993 to 1997. From 1995 to 1997, he ran Pechiney’s Food and Health Care Packaging Sector and held the position of COO of the American National Can Company in Chicago (United States). From 1998 to 2002, Patrick Kron was Chairman of the executive board of Imerys. A director of Alstom since July 2001, he was appointed CEO of Alstom in January 2003, and then Chairman and CEO in March 2003, a position he held until January 2016, when he created PKC&I (Patrick Kron – Conseils & Investissements). In November 2016, he was appointed Chairman of Truffle Capital, Paris, France. His other mandates include that he is a Board Member of Sanofi S.A., Gentilly, France, and Bouygues, Paris, France.

About LafargeHolcim
LafargeHolcim is the leading global building materials and solutions company serving masons, builders, architects and engineers all over the world. Group operations produce cement, aggregates and ready-mix concrete which are used in building projects ranging from affordable housing and small, local projects to the biggest, most technically and architecturally challenging infrastructure projects. As urbanization increasingly impacts people and the planet, the Group provides innovative products and building solutions with a clear commitment to social and environmental sustainability. With leading positions in all regions, LafargeHolcim employs around 90,000 employees in more than 80 countries and has a portfolio that is equally balanced between developing and mature markets.