Joe Kerr Ltd. has been producing in the Wingham, Ont. area for close to a century. 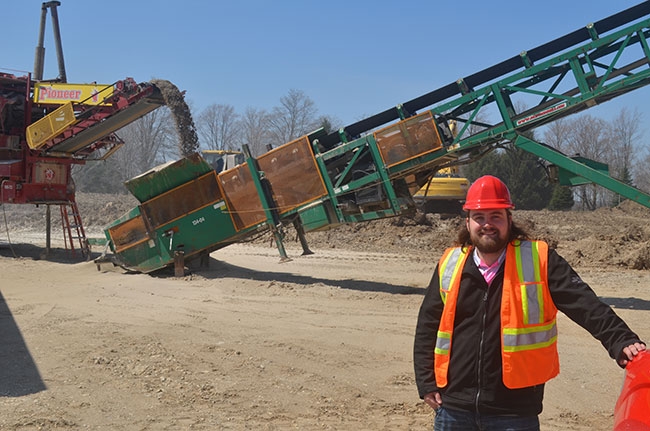 Andrew Kerr, management trainee for Joe Kerr Limited, is currently learning all the ins and outs of his family’s business from his father, Murray.

Founded by Joe Kerr in 1927, the company started out as a sand and gravel producer for the surrounding area. Joe’s first year consisted of a ’27 Fargo truck with a 1.5-ton capacity and a hand-operated dump box, with his first crusher introduced to the operation in the mid-1930s. Fast-forward to present day and the company has grown by leaps and bounds. The company, now owned by Joe’s nephew Murray Kerr, now boasts a fleet of modern trucks, eight crushers (two primary, six secondary) with screeners and related processing equipment, a heavy-duty truck repair centre and eight gravel pits throughout midwestern Ontario.

The company employs close to 50 people in peak season, making it one of the largest employers in Wingham, which has a population of less than 3,000.

“Our main focus is custom crushing,” says Andrew Kerr, management trainee for Joe Kerr Limited, who is currently learning all the ins and outs of his family’s business from his father, Murray.

The company’s crushing fleet currently consists of two Pioneer primary crushers, four Pioneer secondary crushers – one of the crushers was built in 1973 and is still operating –  and two newer Elrus cone crusher plants.

“They’re all mobile units, although some will stay in one spot year-round,” Andrew says, adding that the company’s latest investment was in its second Elrus cone crusher in 2015, and in their scales and screens from Silver Top Supply, based out of London, Ont.

Joe Kerr produces over 2 million tonnes of aggregate annually, including Granular A, M, B (a variety of types), drainage stone, screenings, dust, Class 1 stone and other various screened stone products. It works with some of the larger companies in southern Ontario, including Walker Aggregates and Waterford Sand & Gravel and Preston Sand & Gravel.

In addition to custom crushing and sand and gravel production, the company also uses its fleet of trucks and tractors for township road maintenance and off site fill removal on a variety of local and Kitchener area building projects.

“We work as far north as Orillia right now and as far south as Port Dover,” Andrew says.

The company also keeps its operations diverse by servicing other companies’ trucks in its heavy-duty repair centre, in addition to using the facility to maintain and repair the Joe Kerr fleet.

“We also do winter maintenance for Huron County so we can keep some of the guys through the winter,” Andrew adds. “The nice thing about having these diverse areas of work is that when one is going stronger it can help pick up other areas.”

Challenges
Current challenges for the company include fuel costs and a weak dollar.

To combat the weak Canadian dollar, the company invests as much as they can in equipment manufactured in Canada.

“Most of our stackers are McCloskey International. We’ve been buying from them since 2002,” Andrew says.

Another regular challenge for the company is keeping a keen eye out for any species-at-risk at their sites.

“We always have to make sure we’re not hurting anything that may have moved in over the winter,” Andrew says, adding that his company installed metering equipment at a creek they worked nearby, to ensure the operation wasn’t affecting the mating rituals of a local fish population.

Proactive safety
Joe Kerr Limited takes a proactive approach to health and safety and invites provincial ministries to their operations to tour their sites before they start up.

“We’d rather invite them down and have them tell you what can be prevented then have them come down on their own and end up shutting down an operation,” Andrew says, adding that he believes being proactive will increase the willingness of provincial health and safety representatives to work with a company on finding solutions to any potential issues.

“We’re going to do things properly, even if it hurts production, so we can ensure you’re going to go home at the end of the day,” Andrew says. “We’re fortunate that we work with leaders like Walker and Waterford, who we feel are ahead of the curve, and we try and keep up with them.”

Andrew Kerr, management trainee for Joe Kerr Limited, is currently learning all the ins and outs of his family’s business from his father, Murray.