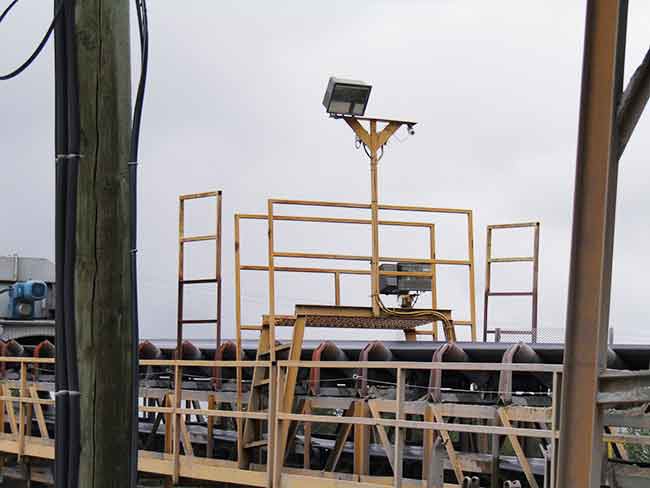 Mainland Sand & Gravel has now installed a total of 12 cameras to provide the optimal monitoring system for its Cox Station Quarry.

August 5 – Installing a video camera is not a new concept. Video cameras have become one of the best forms of security for providing hard evidence when people tamper with your business or personal property.

But a video camera can provide alternative uses, especially at important observation points in an aggregate operation, as it has at Mainland Sand & Gravel’s Cox Station Quarry. The quarry, located on the banks of the Fraser River just beyond Metro Vancouver in Mission, B.C., has incorporated video cameras to provide an extra set of eyes for the barge-loading, conveyor monitoring and crusher portions of its operation.

“We put in a new, long conveyor line in our system,” explains Louie Szlovicsak, mine manager at the quarry. “When we put it in, our operator that loads the barge could not see the transfer points. We decided that rather than add an assistant to watch the locations, we came up with the idea of adding camera stations.”

The previous mine manager investigated his options for cameras and after speaking with several colleagues throughout the industry, he settled on the equipment manufactured by Opticom Technologies. He was told that the Opticom CC02 camera was designed to withstand constant vibration and “flying” objects like rock as well as operate in any extreme weather. These cameras are so tough that they are even installed on Tunnel Boring Machines.

The company has now installed a total of 12 cameras, to provide the optimal monitoring system. Any camera can be recorded if needed.

“We had to hardwire our system based on the distances between the cameras,” Szlovicsak says. “While the infrastructure was being built we ran cable to each observation point so there was no real effort involved in the overall installation.”

The system ensured that there were no blind spots caused by the positioning of the video equipment on the quarry site or at the river. The cameras are linked to a central monitor, which is located in the operator’s station. At any time, the operator can observe all of the cameras or choose to focus on a single camera.

The camera closest to the barge transfer point is remotely controlled and has a 360-degree range. The operator has a joystick controller, which can point the camera to any area and zoom in or out on any target.

Mainland Sand & Gravel has now installed a total of 12 cameras to provide the optimal monitoring system for its Cox Station Quarry.

The system has provided exactly what was needed for the barge-loading portion of the company’s operation. It has provided a clear view of all of the important observation points at all times, giving the operator the ability to see any issues as they occur. Video has cut down on the downtime associated with issues that have previously occurred in the operation.

Any downtime has rarely been caused by the cameras themselves, which now have eight years on the job at Cox Station.

“One camera failed, but the manufacturer immediately came and replaced it with a new camera,” Szlovicsak says.

There have been some frayed or cut wires to fix or replace, but very little work has gone into replacing the video equipment, despite the nasty work environment. On the inside, the company has replaced the original switcher it purchased for viewing the cameras, but that was to be expected. The system itself, including the monitors, video recorder and joystick, have survived this tough environment.

You would think that the continuous vibration, dust, flying debris and extreme weather conditions would have caused issues for the camera system, but Szlovicsak says that is not the case. Instead, he described the CC02 Cameras as virtually “bulletproof.” After close to a decade since the original installation, the camera system still provides the best solution for ensuring the smooth execution of the barge-loading operation at Cox Station Quarry.