Profit before income taxes was $187 million for the first quarter of 2015, compared with $182 million for the first quarter of 2014. The increase was primarily due to a $19 million decrease in provision for credit losses, partially offset by a $7 million decrease in net yield on average earning assets and a $3 million unfavourable net impact from lower average earning assets.

“Our business continues to perform well, reflecting a stable portfolio and a diversified funding platform,” said Kent Adams, president of Cat Financial and vice president with responsibility for the Financial Products Division of Caterpillar Inc. “The global Cat Financial team delivered solid results and we continue to be well positioned to serve Caterpillar, Cat® dealers and customers worldwide.”

For over 30 years, Cat Financial, a wholly owned subsidiary of Caterpillar Inc., has been providing financial service excellence to customers. The company offers a wide range of financing alternatives to customers and Cat dealers for Cat machinery and engines, Solar® gas turbines and other equipment and marine vessels. Cat Financial has offices and subsidiaries located throughout North and South America, Asia, Australia and Europe, with its headquarters in Nashville, Tennessee. 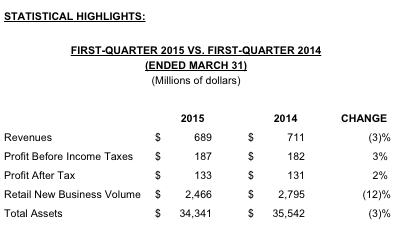