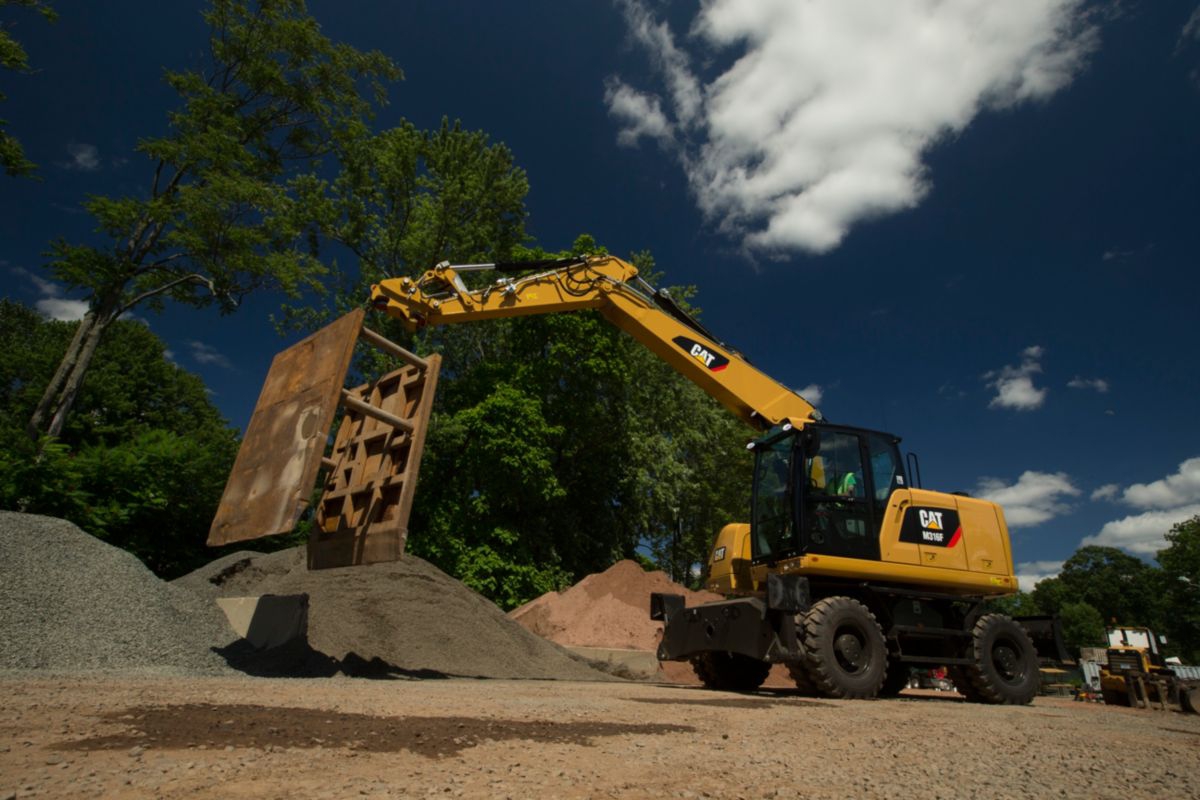 Heading the list were initial quality and reliability, low operating costs, operator comfort and safety, simplicity of operation and maintenance, durability, and environmental friendliness. The new models are designed around those goals, while retaining the best features of predecessor models, including the Cat Smartboom, ride control, joystick steering, and load-sensing hydraulics. The new models also feature a dedicated swing pump, hydraulically driven cooling fan, large working envelope, added stability, and a range of configurations and attachments.

The exterior of this new model has been completely restyled, including a completely new ROPS-compliant operator’s cabin featuring higher pressurization, larger door with added glass, and new windshield with parallel wipers. Also new are the mirrors (optional heated), rain visor and light protectors, and larger skylight. The rearview camera in the redesigned counterweight is standard, as is the right-side camera with its separate in-cab color monitor.

Entering and exiting the cabin is now easier with three redesigned access steps and newly designed door handrails. Inside the cabin, the left-hand console tilts to facilitate entering and leaving the seat, and the console includes an integral safety lever. Also new is the tilting, adjustable-height steering wheel.

Easy to operate, maintain and service

An automatic system, when enabled by the operator, senses machine parameters and locks the axle-oscillation function and sets the service brakes, readying the machine to dig. This feature reduces operator fatigue by removing the need to constantly press the brake pedal, resulting in added productivity. Brake and axle locks are automatically released when the operator presses the travel pedal again.

A new travel-lock system, which is engaged via a switch on the panel, combines implement-stop and swing-lock functions. For further convenience, cruise control is a standard feature, allowing the operator to choose a desired speed and activate that speed via the Quick-Access button on the monitor.

Versatility being a key attribute of wheeled excavators, operators can adjust the machine to the task and to personal preference; for instance, hydraulic pressures and flows for various attachments can be easily adjusted all at once from the monitor in the cab.

The F-Series wheeled excavators also incorporate a PIN-code anti-theft system. For operator convenience during short breaks in production, the system remembers the last code entered before engine shutdown and allows that code to remain active for a period of time.

Also, a new blade has a redesigned profile, assisting material to roll more easily in front of the blade. The M316F and M322F offer a parallel blade, allowing the blade to remain parallel to the ground at any height.

The engine remains longitudinally mounted with the cooling package forward, resulting in easy, ground-level access to daily maintenance points. An electric fuel-priming pump eliminates filling filters before installation. All radiators are grouped in the same compartment, and the condenser can be tilted out (no tools required) for ease of cleaning. Electrical and hydraulic components are grouped for ease of service, and an automatic centralized greasing device (Auto-lube) is standard, allowing operators to remain focused on the job.

The C7.1 ACERT engine, with a durable, field-proven design, integrates an emissions after-treatment system, which requires no attention other than periodically replenishing the diesel-exhaust-fluid tank. Emissions technology includes the Cat NOx-reduction system, selective catalytic reduction system, diesel oxidation catalyst, diesel particulate filter (DPF), and high-pressure/common-rail fuel system. The DPF passively regenerates (burns away collected soot), requiring no intervention by the operator and causing no interruption in the work cycle. The C4.4 engine uses the same emissions technology, except for not using a DPF.

Optional Cat Bio HYDO Advanced hydraulic oil and B20 bio-diesel blends (up to 20 percent bio-diesel in ultra-low sulfur diesel) can be used with no reduction in system life.

An engine-idle-shutdown system saves fuel by stopping the engine after it has idled for a preset interval. In addition, the Eco Mode on the new models reduces engine speed to save fuel, but does not compromise power or performance.