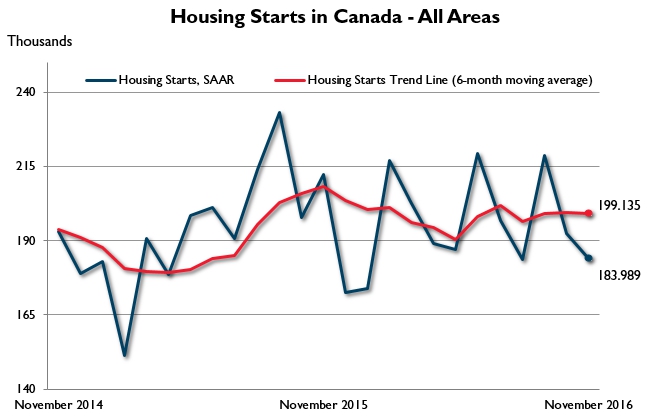 December 8, 2016 — The trend measure of housing starts in Canada was 199,135 units in November compared to 199,641 in October, according to Canada Mortgage and Housing Corporation (CMHC). The trend is a six-month moving average of the monthly seasonally adjusted annual rates (SAAR) of housing starts.

“Housing starts kept a steady pace in November as upward trends observed in British Columbia and the Prairies offset downward trends recorded in Ontario, Quebec and the Atlantic provinces,” said Bob Dugan, CMHC Chief Economist. “We’re also seeing that housing starts are on track to have moderated in 2016 compared to 2015 in most centres where we detected overbuilding.”

CMHC uses the trend measure as a complement to the monthly SAAR of housing starts to account for considerable swings in monthly estimates and obtain a more complete picture of the state of Canada’s housing market. In some situations analyzing only SAAR data can be misleading, as they are largely driven by the multi-unit segment of the market which can vary significantly from one month to the next.

In November, the seasonally adjusted annual rate of urban starts decreased in Ontario, Quebec and in Atlantic Canada, but increased in British Columbia and in the Prairies.

Rural starts were estimated at a seasonally adjusted annual rate of 17,161 units. 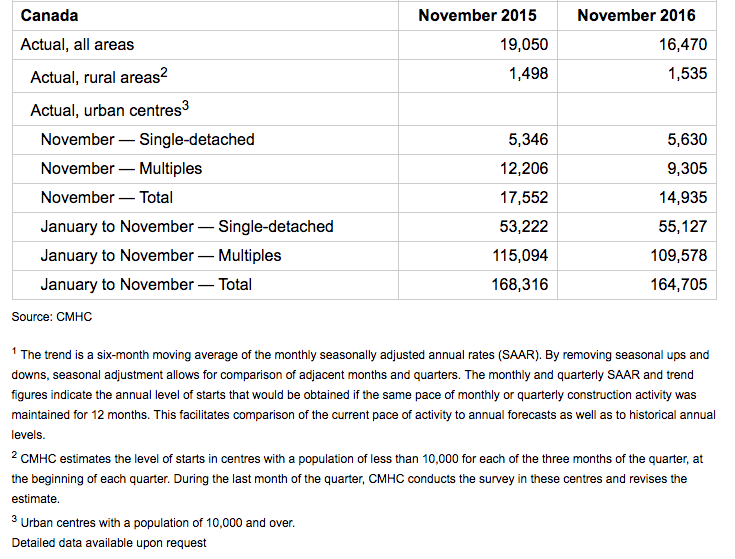 As Canada’s authority on housing, CMHC contributes to the stability of the housing market and financial system, provides support for Canadians in housing need, and offers objective housing research and information to Canadian governments, consumers and the housing industry.