Looking at this year’s Top 10 aggregate operations, the pattern
established in recent years continues, with Canada’s three
biggest operations all water based and in the same order as
the previous year. 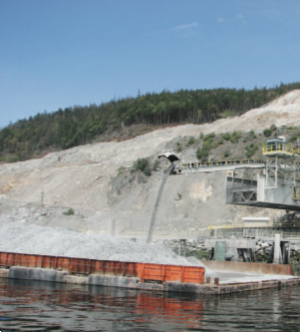 Looking at this year’s Top 10 aggregate operations, the pattern
established in recent years continues, with Canada’s three
biggest operations all water based and in the same order as
the previous year.

Three of the Top 10 operations are located in British
Columbia, with four in Ontario and one each in Quebec, Nova Scotia
and Alberta. The top two operations reported big production increases
to pull away from the pack. Texada Quarry on B.C.’s Texada Island,
now the country’s biggest aggregate operation by far, saw a 28 per
cent jump in production while the number two operation, the Sechelt
pit of Construction Aggregates Limited on B.C’s Sunshine Coast saw
a 14 per cent jump. Signiﬁcant increases were also reported by the Villeneuve Pit of Inland Aggregates,Dufferin Aggregates’ Milton Quarry
and Mainland Sand & Gravel’s Cox Station Quarry. The remainder
reported similar volumes or declines from 2006. 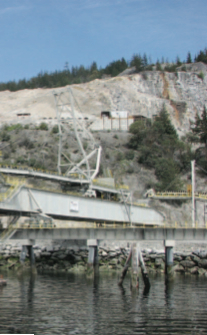 Kevin Spenst, general manager, Lafarge USWC Division, explains
that in 2007 the Texada Quarry underwent a number of signiﬁcant
changes as well as achieving a number of signiﬁcant milestones.
The quarry continued its exceptional safety record with no lost time
accidents surpassing ﬁve years and was recognized by the Ministry of
Mines with the Stewart O’Brian award for Safety Excellence.

Record sales from the quarry for 2007 were 7.3 million tonnes, due
to the addition of over 1.0 million tones of material sold to the Deltaport Project along with asphalt aggregate sales to Grace Paciﬁc in Hawaii, and limestone sales to Cemex in San Francisco. Spenst adds that
productions and sales volumes were virtually the same last year. The
quarry implemented of a number of important pieces of equipment in
2007. The addition of an upgraded X-Ray system in the laboratory
along with a complete quarry GPS System will ensure the quarry production meets the high speciﬁcation demands in the market for years
to come. Successful completion of a ﬂeet equipment study ended with
the ordering of a number of new pieces of equipment in 2007. A Caterpillar 992 wheel loader, a 777 haul truck, a D10 dozer and a Komatsu
300 excavator were all ordered in 2007 for delivery in 2008. Another
feed bin was added to the shiploader in 2007 to increase the feed capacity by another 1000 tonnes/h. With the enormous amount of work
in 2007, there was no time for any major capital upgrades. Crushing
plants were “maxed out” in 2007 as Texada produced record levels.

A number of new areas in the quarry were developed for additional
reserves. A new granite area was opened exposing additional sources
for construction aggregates, along with a new white limestone quarry
for specialty aggregates.

Spenst adds that (Texada’s) market demands in Canada have not
slowed and expectations are for the current trend to continue for the
next few years. The slowing economy in the U.S. has affected some
large projects, but this has been somewhat offset by lack of available
reserves in the immediate demand areas.
At the Sechelt pit of Construction Aggregates Ltd, Canada’s biggest sand and gravel operation, mine manager Mike Latimer reports
that the operation processed 5.7 million tonnes in 2007 and sold 5.1
million tonnes. There were no signiﬁcant changes to the process,
equipment or suppliers. For 2008, Latimer adds that the operation is
shooting for 6.1 million tonnes processed for 2008 as its sister operation in Victoria (Producers Pit) has shut down and is reclaiming
stockpiled material only.

Perry Newman is manager at the Manitoulin Quarry of Lafarge
Canada Inc. Newman reports a difﬁcult year in 2007 due to a number
of external factors. Chief among these was the strong Canadian dollar
as most of the demand for this Ontario water based operation’s products stems from U.S. markets on the Great Lakes. As Newman points
out, 2007 was the ﬁrst time since the quarry began operation in May
1981 that the value of the Canadian dollar has exceeded the U.S. dollar. In tandem with the exchange rate issue Manitoulin has, like many
other Canadian exporters, felt the downdraft of a slowing U.S. market.
In addition, the quarry’s shipments have been impacted by lower water levels in the Great Lakes, with Lake Huron at or near record lows in fall 2007. Those low water levels translate into fewer tonnes per
shipment to deal with reduced draft at some
customer dock locations. Finally, Manitoulin has experienced labour challenges, with
the loss of some experienced employees to
the expanding base material mining industry
around Sudbury. These challenges notwithstanding, Manitoulin retains its position as
one of Canada’s biggest quarries with 4.4
million tonnes of production in 2007. Sustaining capital investment last year included
two new pieces of Caterpillar mobile equipment, a 777F haul truck and a 14M grader,
with the status quo maintained on the process
equipment side.

At Lafarge Canada’s Dundas, Ont. crushed
stone operation, quarry manager Ron Graham
reports that recent capital additions include a
Metso HP500 cone crusher, installed during
winter 2007/2008. The HP500’s job will increase the yield of clear sized stone at the operation’s secondary plant and in terms of process ﬂow, is located after a Metso Nordberg
2.1 m cone crusher and ahead of two Konica
vertical shaft impact (VSI) crushers.
At the face, a new Caterpillar 992G has replaced
another 992G for primary loading duty. The
typical primary load and haul set up at Dundas includes a Caterpillar 992G wheel loader
teamed with a 990 high lift wheel unit to load
three Caterpillar 777D haulers. In terms of
business level, Graham expects 2008 to be
similar to Dundas’ 2007 production tonnage
of 4.3 million tonnes.

Brian Puchala, operations superintendent
Northern Alberta at Inland Aggregates’ Villeneuve plant near Edmonton, reports that the
2008 construction season is well underway
after cold weather and snow well into April.
In Puchala’s view, there has been a easing of
labour shortages due to the recent slowdown
in Alberta’s booming oil and gas industry, although there is still the possibility of upgrader plant construction east of Edmonton. On
the construction side, the start of the north leg
of the Anthony Henday Parkway will boost
demand, with construction expected to start
this fall. In terms of overall 2008 volumes,
Puchala expects this year to be similar to or
slightly lower than 2007 when the Villeneuve
plant produced 4.3 million tonnes from raw
material supplied by two nearby pits.

Administration manager Dan Fougere reports that the Porcupine Mountain quarry of
Martin Marietta Material Inc. in Nova Scotia
produced 4.0 million tonnes in 2007. On the
marketing side, a close eye is being kept on
U.S. as the operation’s primary market, with
the strength and timing of the recovery of the U.S. market likely to impact capital investment decisions here.

Antonio Mascarenhas, site manager at
Dufferin Aggregates’ Milton Quarry explains
that water management at the property is accomplished using a state-of-the-art water
management system. The water management
system collects surface water and groundwater to maintain dry working conditions in
the Main Quarry and North Quarry. Water in
the quarry is collected in dewatering sumps
and conveyed to a reservoir where it is stored
and eventually discharged for quarry operations or environmental mitigation. Two main
dewatering sumps are used, including one in
the Main Quarry and one in the North Quarry.
Additional satellite sumps, channels, and culverts are used as necessary to convey water to
the main dewatering sumps. The main dewatering sumps 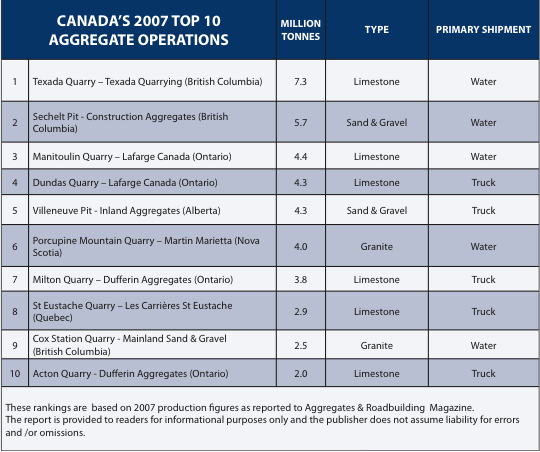 discharge water to the reservoir,
which is located in the Main Quarry. Some
of this water can be diverted to quarry operations, as needed. The reservoir is the most
visible component of the water management
system at Milton Quarry. Occupying an area
of approximately 70 ha, the reservoir can
store 5.5 m3 of water (including 1.7 million
m3 in the normal Main Quarry gravity outﬂow operating range (306 to 309 m AMSL)
and an additional 2 million m3 of reserve
capacity above the Main Quarry pump outﬂ ow
elevation of 303 m AMSL). To give some idea
of the relative size of the reservoir, the total
and active holding volumes of nearby reservoirs are; Hilton Falls, 1.8 and 1.0 million m3,
Kelso 1.5 and 1.0 million m3 and Scotch
Block 1.8 and 0.6 million m3. 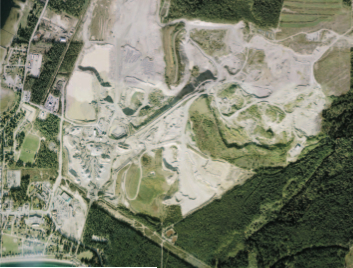 Pumping stations at Dufferin’s reservoircan provide water to quarry operations, the
Hilton Falls Reservoir Tributary, and the
North Quarry Recharge Well System. Duf-
ferin Aggregates discharges water from
Milton Quarry to the HFRT. Discharge
to the HFRT is determined annually with
Conservation Halton in order to maintain
natural ﬂ ows in the tributary. At the present
time, the total annual discharge from Milton
Quarry to the HFRT is 700,000 m3. Dufferin
Aggregates operates in the North Quarry
Recharge Well System around the western
portion of the North Quarry. The North
Quarry Recharge Well System consists of a
pumping station at the reservoir, 2.6 km of
water main (600 mm to 300 mm diameter),and a series of 20 recharge (injection) wells with ﬂow control systems. The recharge wells are operated to mitigate the dewatering effect from the North Quarry to prevent any adverse effect on the water resources in the area, including private water supply wells, coldwater ﬁsheries, and wetlands. The recharge 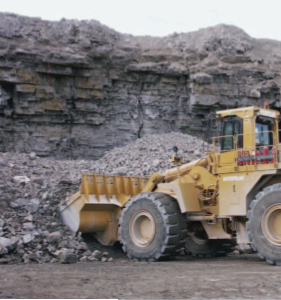 system is operated to maintain the natural seasonal water levels using an adaptive management approach which recognizes the inherent variability of the natural environment. As Milton Quarry expands to the north into the approved extension lands, the recharge well system will be extended by approximately 3.5 km to provide protection to the water resources in that area.  In terms of production, Mascarenhas expects that 2008 will see a similar level of production to the 2007 total of the 3.82 million tonnes. Volumes have rebounded following poor weather in March, although the expects another good year overall similar to
2007 production of 2.0 million tonnes. Acton’s
volumes are, in the long run, something of a
barometer of the regional roadbuilding sector’s
health as its principal products are granular road
base as well as 9.5 mm and 19.5 mm coarse asphalt aggregates. In 2006, for instance, its volumes were lower for a while as the spike in oil
prices triggered a jump in asphalt cement prices
which in turn squeezed roadbuilding budgets.

Capital additions in 2007 included a Caterpillar 777F haul truck, increasing the primary haul ﬂeet to six in order to maintain
production rates from the quarry’s Phase 3
development. Another 777F will be acquired
in 2008 as a replacement truck for one of
the ﬂeet’s older units. This year will also see
the delivery to Acton of a second Caterpillar
990H high lift wheel loader, also as a replacement machine and, for the ﬁrst time, two John
Deere 844K wheel loaders. On the processing
side, new equipment includes a Thor 914 mm
x 45.7 m stacker. Still on operations, 2008
will be something of a milestone year for Ac-
ton in terms of rehabilitation. With most of
the soil already in place, this year will see the
ﬁnal rehabilitation on the eastern half of the
quarry’s Phase 2 area.