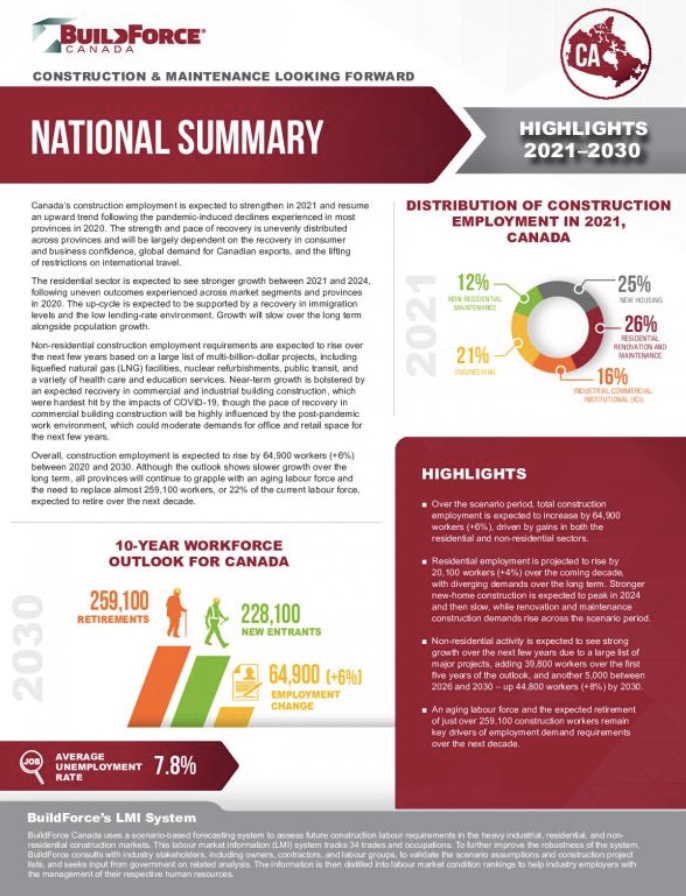 BuildForce Canada released a labour market forecast explaining construction requirements across the country are expected to rebound in 2021 and rise through the next 10 years as the industry recovers from the COVID-19 pandemic.

The 2021–2030 Construction and Maintenance Looking Forward national report forecasts construction employment to rise by 64,900 workers over the next decade. This represents an increase of six per cent over 2020 workforce levels. While the outlook forecasts much of that growth to take place through 2025, by the end of the decade, the respective provincial industries will have to cope with the need to replace nearly 259,100 workers, or about 22 per cent of the current labour force, due to retirement.

The strength and speed of recovery will look different for each province and will be affected by the rollout of COVID-19 vaccines, the recovery in consumer and business confidence, the global demand for Canadian exports, and the lifting of restrictions on international travel.

“Canada’s construction outlook is strong for 2021 and well into the middle portion of the decade thanks to gains in the residential and non-residential sectors,” says BuildForce Canada Executive Director Bill Ferreira. “And while we forecast growth to slow over the later years of our forecast period, we nonetheless expect that the industry will be challenged to recruit more than 309,000 new workers to replace retirees and keep pace with demand.”

BuildForce Canada anticipates that the non-residential sector will lead industry growth between 2021 and 2023 and be driven by a large list of public transit, health care, education, roadwork, and other civil infrastructure projects. Overall, non-residential employment is projected to increase by more than 39,800 workers between 2021 and 2025, and another 5,000 to 2030. The sector is expected to end the decade up 44,800 workers (+8%) compared to 2020.

After a mixed year in 2020, the residential sector is expected to see strong growth post-2021. Low lending rates and renewed immigration levels are expected to drive a moderate up-cycle in new-home construction to 2024, while renovation work is projected to grow steadily. As a result, total residential employment is expected to peak in 2024 before ending the decade with an increase of nearly 20,100 workers, a four per cent growth, compared to 2020 levels.

Activity across the Atlantic provinces is expected to vary. Newfoundland and Labrador will see a modest recovery through 2021, but long-term growth will be constrained. The forecasts for New Brunswick and Nova Scotia, meanwhile, will be bolstered by in-migration trends, the process of people moving into a new area in their country to live there permanently. The report says Prince Edward Island was the only province of the four to experience a rise in construction employment in 2020, and that increase is expected to continue through 2022.

Quebec’s market is expected to rebound from the pandemic in 2021 and grow through 2024 on the strength of private-sector spending and strong levels of government investment.

Ontario will be driven by a growing pipeline of major infrastructure projects across all regions. An additional recovery in commercial and industrial investment will bring labour demands to a peak in 2026. 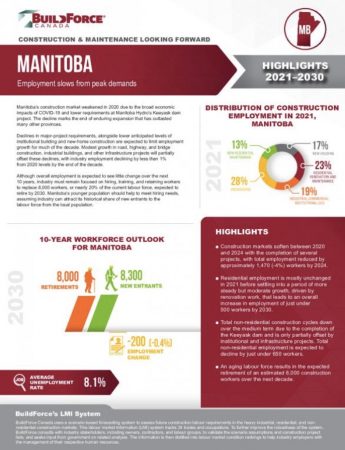 In 2020, Manitoba experienced its first year of negative construction growth in several years. Declines in major-project requirements and lower levels of institutional and residential growth may cause employment levels to drop slightly, by one per cent, over the forecast period.

A broad-based recovery is expected to take hold in Saskatchewan in 2021, as education, health care, utility, and mining investment combine to boost growth across most construction segments to an expected peak in 2023.

The report says Alberta was one of the provinces hit the hardest by the pandemic and could see further challenges ahead. Ongoing uncertainty in the energy sector and further deferrals and cancellations of major investments have significantly tempered expectations for a strong near-term recovery. A more material expansion is expected after 2023. 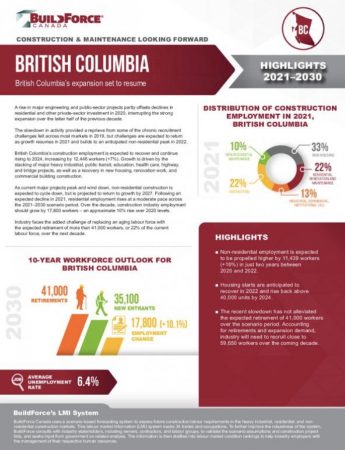 Finally, British Columbia is poised to enter the steepest period of growth in its forecast period. The province will add more than 11,400 non-residential workers through 2022, before shedding as many as half of those gains through 2026, before renewed growth later in the period adds new jobs. By 2030, employment is expected to increase by 9,900 workers compared to 2020.

“The unevenness with which provinces and even regions within those provinces will experience construction growth over the forecast period suggests that intra- and interprovincial mobility, as well as drawing workers from other industries, will be key to meeting construction demands,” says Ferreira.

The development of skilled tradespersons in the construction industry takes years and often requires participation in a provincial apprenticeship program. As such, replacing retiring workers typically requires several years of pre-planning to avoid the creation of skills gaps. By 2030, overall hiring requirements in the industry are expected to exceed 309,000 due to the retirement of some 259,100 workers (or 22 per cent of the current labour force) and growth in worker demand of 49,900.

Based on historical trends, Canada’s construction industry is expected to draw an estimated 228,100 first-time new entrants aged 30 and younger from the local population, leaving the industry with a possible retirement-recruitment gap of 31,000 workers. When coupled with demand growth, the industry may be short as many as 81,000 workers by 2030.

The report says an ongoing commitment to training and apprenticeship development will be necessary to ensure there are sufficient numbers of qualified tradespeople to sustain a skilled labour force over the long term. What is yet unclear is how the pandemic will impact registration rates going forward. Limited data collected to date suggests that the pandemic has resulted in a steep decline in new registrations relative to employment across the country. It has also imposed significant obstacles to the in-person delivery of training, testing, and certification, which may impact near-term completion rates.

Building a sustainable and diverse labour force will require the construction and maintenance industry to increase recruitment from groups traditionally underrepresented in the current construction labour force, including women, Indigenous people, and new Canadians.

In 2020, there were approximately 190,000 women employed in Canada’s construction industry, of which 27 per cent worked directly on construction projects. Of the nearly 1.1 million tradespeople employed in the industry, women made up five per cent. Increasing the participation of women in the construction labour force, particularly in the skilled trades, would go a long way to addressing the industry’s longer-term recruitment needs.

The construction industry may also leverage new Canadians over the coming decade to meet anticipated labour market requirements. Canada is expected to welcome an average of more than 320,000 new international migrants each year between 2021 and 2030. This will make new Canadians a growing segment of the overall labour force.