COVID-19 has resulted in a delivery date adjustment 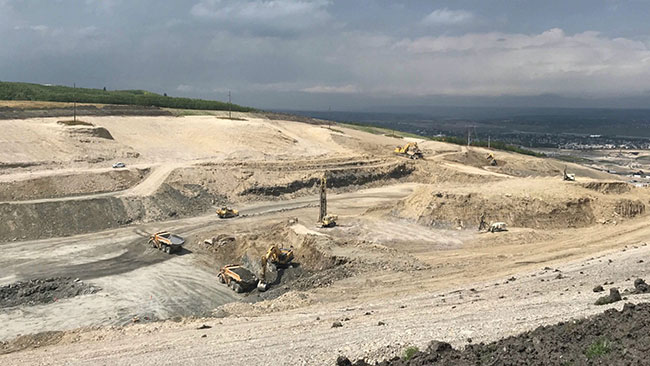 Though COVID-19 is having widespread impact on work processes and supply chains, construction of the Calgary Ring Road is moving forward. The new at-latest delivery date of 2024, recently announced by the Alberta government, takes into account the effects of the global pandemic as well as the need to move a utility line.

“Alberta Transportation has allowed the contractor more time to obtain these materials and the associated materials testing required,” said Cole Hogan, press secretary to Transportation Minister Ric McIver in a July interview with The Calgary Herald.

De Lorey also emphasized that the 2024 delivery date—which is two years later than originally planned—is an “at-latest” scenario. “The 2024 date concerns the south portion of the West Calgary Ring Road,” he pointed out. “We’re constantly monitoring the situation, but we don’t expect any further impacts on the completion date.”

The effects of COVID-19 on work processes, however, have not had a significant effect on delivery dates, explained De Lorey. He mentioned that, in fact, more people were at work on the sites because of the need to alter workspaces to account for necessary physical distancing. New lunchrooms were set up that enable everyone to eat behind their own plexiglass partition. When asked what processes were put into place, De Lorey talked about social distancing, limiting the number of people in enclosed spaces, using available technology for remote meetings and making more PPE available for workers. “It’s just a reality,” he said. “We’re all living a version of the same thing.”

In terms of workplace safety, De Lorey was on point. “Safety is a primary consideration on our worksites—and all industry partners will continue to take precautions for workers and meet all provincial and federal guidelines.” More specifically, he explained, “Our contractors are responsible for devising and enacting safety policies. They are required to submit all safety plans to us; we review them and ensure government guidelines and OH&S codes are being followed.”

This applies as much to COVID-related procedures as it does to all safety measures.

The West Calgary Ring Road extends from Highway 8 North to just north of the Bow River Bridge. Work is also being done on the Trans Canada Highway (16th Ave.), west of Stoney Trail, as part of this project.

The West Calgary Ring Road is divided into three sub-projects: The Bow River Bridge, North (DB1) and South (DB2) projects. The Bow River Bridge and North Project are currently under construction, while design and early works have begun on the South Project. The South Project was recently awarded to Calgary Safelink Partners, a consortium made up of Carmacks Enterprises Ltd., Graham Infrastructure LP and VINCI Infrastructure Canada Ltd. , with a price tag of $277 million.

A map of the Southwest and West Calgary Ring Road.
Images: Alberta Transportation.

The section of the project that is causing the potential two-year delay is south portion of the West Calgary Ring Road, partially due to the relocation of the Enmax utility line.

“It’s not an earth-shattering thing,” explained De Lorey. “The line conflicted with the road and always has—we knew it needed to be moved.”

The utility line was put in when residential areas were developed two decades ago. The delays have been caused by the approval process undertaken with the Alberta Utilities Commission, which has just been completed. The line can now be moved. De Lorey explained that there is much public interest in this relocation because it’s an above-ground line.

When asked about the design-build/design-bid-build delivery method for the WCRR portion of the project, during which design and construction happen concurrently, De Lorey commented that design-build allows for increased flexibility for the contractor and promotes innovation all the way through the construction process.

“The advantage of the design-build delivery method is that it shortens the delivery time,” said De Lorey. “The idea is to lessen the impact of construction on the public given the project is in an urban area, affecting many motorists daily, especially at peak times.”

The construction delivery method for the Southwest Calgary Ring Road is design-build-finance-operate (DBFO), also referred to as a PPP or P3 project.

“The ring road is a critical project that has been years in the making and Calgarians have been waiting decades for it to be completed,” said Transportation Minister Ric McIver in an interview with The Calgary Herald in July. “Most importantly, this major infrastructure project will help get Albertans back to work by supporting thousands of much-needed jobs.”

In its entirety, the Calgary Ring Road project will have supported more than 8,000 jobs in the province of Alberta.