A look at near-century-old Dawson Construction 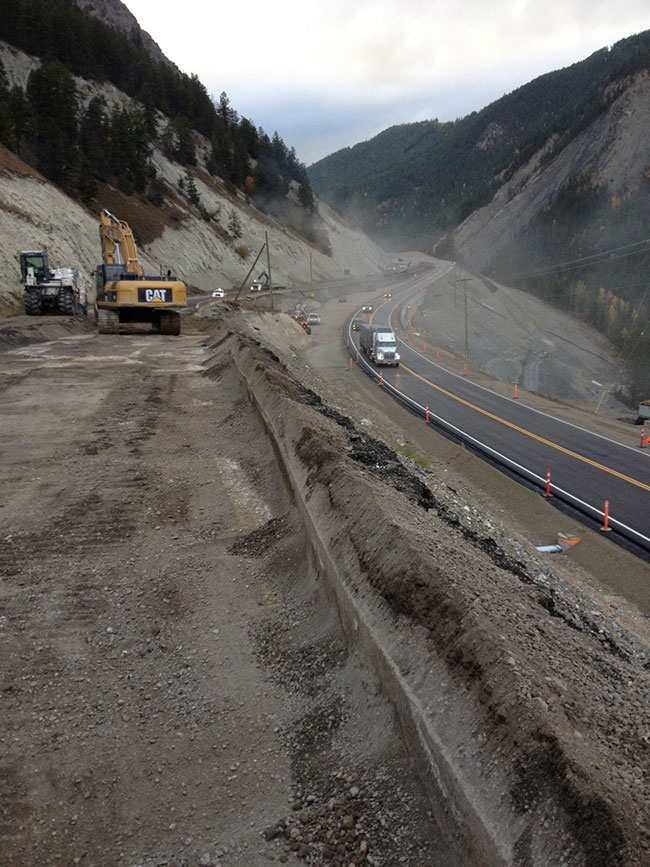 December 5, 2016 – When Fred J. Dawson opened his contractor business and started work on his first contract in 1922 – the construction of a waterline in the Kootenays – it’s hard to imagine that he would have expected Dawson Construction to grow into the company it is today.

Fast-forward to present day and the company is well known throughout Western Canada as a major player in the heavy construction industry with paving, aggregate, civil works, transport and testing divisions. In total, the Kamloops, B.C.-based firm generates employment for more than 500 people.

Even though it’s been close to a century since Dawson’s contractor firm started up, it is still 100 per cent B.C.-owned and operated by the Dawson family; and the owners aren’t the only people working who have been working at Dawson Construction for multiple generations.

Brook Webster has worked at Dawson for 17 years while his colleague, Len Kazakoff, is in his 20th year with the company. Both of them are second-generation employees, following in their father’s footsteps in joining the Dawson team.

“My father was in construction the whole time I grew up,” Kazakoff says. “My first job out of high school was going out and running a packer for my dad on a construction site.”

“That’s where my segue came in, too,” Webster adds. “My dad was working for an asphalt company and I went to work with them at the time, then later followed him to Dawson.”

The decision has worked out well for both men. Kazakoff currently manages the paving and aggregates division of the company and Webster manages the civil construction side of the business.

“There’s a lot of employees in the company that are fathers and sons,” Kazakoff says.

“My nephews work here now,” adds Webster. “There was one time it was my dad, my nephews and myself all working on the same highway project.”

Having multi-generational employees helps the company battle the skilled labour shortages taking place across the country.

“The fact that it is family run and the history behind Dawson is something to be proud of,” Webster says. “You’re building that loyalty as you go. You’re encouraging people to come work here based on the fact that it has been here for a long time, that it is reputable and you can be proud to say you work at Dawson Construction – not that we’re better than anyone else, but when you have someone that’s been around this long they’re obviously doing something right. And when you’re bringing multiple generations in, you’re treating people your people well.”

Staffing challenges
Despite having a group of dedicated, loyal multi-generational employees, Dawson is not immune to the current labour shortages. Webster says finding qualified people is still the company’s biggest challenge. The company often takes contracts in remote areas of B.C. and Alberta.

“Having a workforce that is willing to go to the places we need to work is the challenge,” he says. “We’re starting to get aged out. We’ve still got some men that are 70-years-old working in Chetwynd, 12 hours from home because we can’t find someone else to do the work.”

“The younger generation went to the oil and gas in Alberta for the big dollars and fled the scene, so we’ve got a big gap between the 30-year-olds that we should have there and the newbies that don’t have the knowledge that are working with the 70-year-olds that should be on their way out,” Kazakoff adds.

Unfortunately, it is difficult for companies in the construction sector to retain employees that are strictly interested in the biggest paycheque.

“We have good retention with the guys that have been around long enough to know that they’re going to be treated well, but then you have the new guys that come in chasing the money so the loyalty isn’t there,” Webster says. “We can’t compete in the market we’re in and pay the same money as the guys in the oil and gas industry. So the phone rings [from oil and gas sector] and they vacate us at a moment’s notice. That’s the biggest challenge for us right now. The equipment is still being made, and the government is still pumping out jobs, but finding qualified people that are willing to go where we need them to go work is the biggest challenge.”

With oil and gas on the decline, Dawson Construction has experienced a significant increase in the number of people looking for work. That being said, they’re rarely a good fit for the company.

“We’ve had more resumes then we’ve even seen but as far as quality goes hires we’ve got from that massive stack of resumes… for every 30 resumes we go through, we might find one,” Kazakoff says.

Investing in new tech
Dawson has been investing in some of the latest technologies to improve efficiencies in its various operations and they’ve been paying dividends.

“Some of the technology we’ve been using now is survey data,” Kazakoff says. “We actually have the Stockpiles measurement iPhone app we use for surveying stockpiles. It has the same accuracy as hiring the local surveyor with his GPS unit. It’s just that good.”

Another piece of technology Dawson is planning on purchasing this winter is a drone.

“It meshes up well with the apps,” Kazakoff says. “The issue with the iPhone app is that you can’t always see the piles at all times if there’s another [pile] beside it… It’ll be awesome to be able to know your piles in 10 minutes as opposed to hiring a guy who is picking it up with his GPS, going home… and you don’t get the results for 24 or 48 hours.”

“We switched a couple of years ago to HCSS HeavyBid estimating software,” Kazakoff says. “It’s quite expansive and that helps a lot. Instead of everyone being on their own, we’re all connected to see and review each other’s bids and estimates. We all manage our own areas, but for lots of the jobs all of the areas are important so we bid off sections of jobs together.”

The company also plans on attending CONEXPO in Las Vegas this March to check out the latest crushing software.

Aggregates challenges
When it comes to challenges Dawson has on the aggregates side of the business, the big one is keeping up with new regulations.

“With WBC and mines (Is this WorkSafeBC and a mining gov’t body?) and all the new rules and regulations they keep enforcing, it’s hard to keep up with it all,” Kazakoff says. “Every time we submit for a new mines permit it seems like there are another 10 pages added to the document, and because we’re so big it seems that we have to go the extra mile compared to the local guys that might own one gravel pit.”

The company has its own asphalt plants, which help its aggregate operations remain diverse through the ups and downs of the economy – like when gravel sales take a hit due to a lower number of subdivisions being built, for example.

“Having our own asphalt plant helps because we produce a lot of our own aggregate for ourselves,” Kazakoff explains. “That’s the biggest asset for us. We can so do our own stuff, and if we’re not doing our own stuff we can give out some pricing to other contractors. That’s part of the Eagle Rock Division, which is also our QC division. A lot of companies don’t provide their own testing too, so that’s another bonus for us.”

Having a quality control laboratory that is CCIL certified holds significant weight when it comes to working with the provincial ministries.

“It’s always kind of a grey area where you have your own QC department checking your own material, but because it is CCIL certified it holds a lot of weight,” Kazakoff says. “It’s not easy to become certified like that.”

Interesting projects
For close to a century, the company has had the opportunity to work on a wide variety of interesting projects. One of the highlights of the early years was the construction of the Burrard Bridge for the City of Vancouver, which was done as Dawson’s first joint venture with Harry Wade under the banner, Dawson, Wade & Company Limited.

Around the time of The Second World War, Dawson was very active in defence contracts, including the construction of several airports. The company is currently working at the Kamloops airport extending and repaving the runways – an airport it helped build more than 60 years ago.

“We were doing animal underpasses and overpasses. We were there for about six years,” Webster recalls.  “That was a large, interesting project. We don’t see too many like that, these days. We see a lot turning lanes and intersection upgrades, so it’s nice to get a big contract like that and be in one place for multiple seasons.”

Dawson is also very active in water upgrade projects in First Nations communities, building pump houses and reservoirs and upgrading the existing infrastructure to ensure the communities have access to clean water.

With more than 90 years of experience under its belt, a core group of multi-generational employees, and a willingness to invest in the latest technologies to enhance its operations, Dawson Construction is positioning itself well to continue its successful operations well into the future.