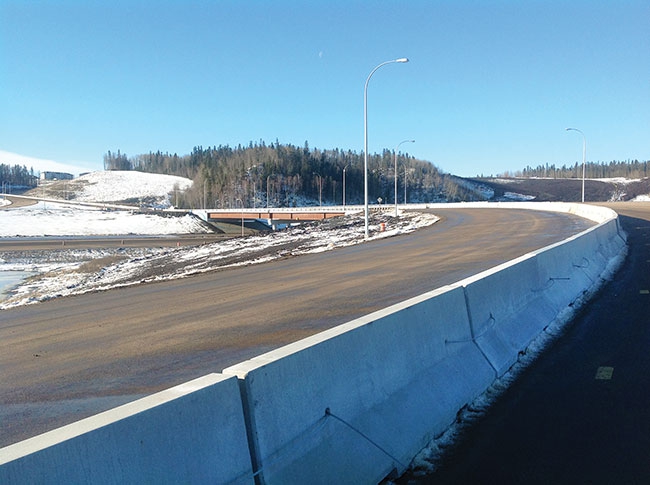 Approximately half of the 240km of the Highway 63 twinning project is to be completed by the end of the 2015 construction season.

As the province of Alberta readied for the 2015 road construction season, they were faced with declining budgets from the economic slowdown caused by the decline in the oil and gas industry. The booming builder of road infrastructure in Canada faced an uncertain future compounded by a change in political direction provincially, and potentially federally, threatening to change spending priorities for infrastructure development.

Amidst the turmoil sits three road construction projects, at varying degrees of completion, with a price tag of over $1 billion. Each of the projects are seen as vital transportation links for easing congestion and providing a stronger flow of goods in and out of major communities.

Like its Calgary counterpart, the Edmonton ring road was devised by government officials in the 1970s, with work done to acquire land in the 1980s and 1990s. The first section of the road, the west portion between Yellowhead Trail and Whitemud Drive, was built in the 1990s. The southwest leg followed, completed in October of 2006, although the roadway was not entirely free-flowing until November of 2011. The southeast section of the roadway was then opened in October of 2007, followed by the northern section in November of 2011.

What remains for the Anthony Henday Drive, a roadway that will span 78km upon its completion, is the completion of the northeast section of the roadway. The Northeast Anthony Henday Drive is a 27km stretch of six-and-eight lane divided free-flowing highway that includes seven grade separations, nine service interchanges, two river crossings and 47 bridge structures.

The road represents one of the largest transportation projects ever undertaken by the provincial government, according to Alberta Transportation:

“Provincial spending on Northeast Anthony Henday Drive is projected at $446 million over the next three years, for a total investment of $1.81 billion. This is the single largest highway P3 construction project the province has undertaken. Using a P3 model allows NE Henday to be finished three years earlier than conventional delivery and at a savings of $370 million for taxpayers. Total investment on the Anthony Henday to date is $4.2 billion, including $197 million in federal funding.”

With 90 per cent of the Henday already open to traffic, approximately 71km as of the beginning of the 2015 road construction season, the province is hoping that the entire roadway will be completed on schedule in late 2016.

Calgary Ring Road
The signing of the historic agreement between the Alberta government and the Tsuu T’ina Nation paved the way for the completion of the 101km Calgary ring road. The agreement, signed in October of 2013, saw Alberta give the Tsuu T’ina over 2,000 hectares of land plus more than $340 million in exchange for the lands needed to complete the desired route for the road.

Planned in the 1970s as a Highway 1 bypass road, the Ring Road provides a solution for circumventing stretches of municipal roadways in order to efficiently get to roadways leading west to Banff, north to Edmonton, east to Medicine Hat, and south to Lethbridge.

Prior to the start of the 2015 road construction season, the northwest, northeast and southeast sections of the ring road have been completed. Those three sections represent approximately 70km of the entire span of the road. The remaining 31km of six-and-eight lane freeway, broken up into southwest and west portions, include 66 bridges, 20 interchanges and two underpasses.

With the expected Land Transfer Agreement (LTA) to move forward this summer, the transfer will trigger a clause in the LTA that requires that this leg (southwest) of the ring road is completed within the next seven years. As a result, construction of the southwest portion of the ring road will begin later this year.

In the budget presented prior to the recent provincial election, the government recommended delaying the start date of the West Calgary Ring Road to 2020-21. The move was made to help Alberta Transportation save $1.4 billion versus the 2014 budget, a move that would save money in the wake of the downturn in the oil and gas sector. The new NDP government has not yet announced formally if that plan will change now that they have taken office.

Officials from Calgary expressed great concern over the decision, forcing the city to change direction on road construction and rehabilitation plans for the next five-to-10 years as a result of the delay, as west-end roads currently taking the bulk of the traffic road were expected to see significant reductions in day-to-day activity. Sacree Trail north of Glenmore Trail and Glenmore Trail west of the city were cited as two roads of immediate concern.

Once the road is complete, the roadway will offer a 101km of free-flow traffic around Calgary. Both the west and southwest leg will be completed using a P3 model. The P3 model has already saved the province approximately $2 billion between both the Calgary and Edmonton ring road projects. The overall cost of the Calgary ring road is expected to be approximately $5 billion

Approximately half of the 240km of the Highway 63 twinning project is to be completed by the end of the 2015 construction season.

Twinning Highway 63
The 240km twinning of Highway 63 from Grassland (east of Athabasca) north to Fort McMurray will see its most significant progress during the 2015 road construction season. Prior to this year, more than 20 per cent of the twinning work had been completed, but that is expected to rise to approximately 70 per cent by the time winter hits northern Alberta.

The twinning project will double the road capacity of a difficult stretch of highway, allowing for the safer movement of friends and family throughout the oil patch, as well as good and resources in and out of the area.

The twinning has included Alberta’s three largest non-P3 transportation contracts, all three of which were awarded in 2013:

Scheduled for project completion at the end of the 2016 construction season, Alberta will have spent more than $2 billion on the twinning project, as well as several other improvements to the highway network in the Wood Buffalo region.

Next on the Agenda
One current project, and one forecasted project, are expected to meet the demands for additional highway capacity in areas of demonstrated need.

During the 2015 construction season, the province will begin twinning portions of Highway 19 between Highway 60 and the QEII near the Edmonton International Airport. A 12.3km stretch of twinning with an $80 million price tag, this piece is integral to helping improve the flows of goods and services, as well as residents and visitors, to and from the airport. Also a point of consideration with the expansion of this section of highway is potential re-alignment issues caused by future plans for an additional runway at the airport.

Also in 2015, Alberta Transportation takes a step forward in planning, what could be, the next massive road construction project to move forward. Over the next two years, $6 million will be spent to study the six-lane QEII corridor from Calgary to Edmonton in order to devise a plan for how to address the increased volume forecasted for that route.

Regardless of the outcome of that study, Alberta will continue to provide the funding needed to ensure that the province has the necessary transportation infrastructure for the safe and secure passage of people and goods, as they have demonstrated with the multi-billion dollar projects now close to completion.