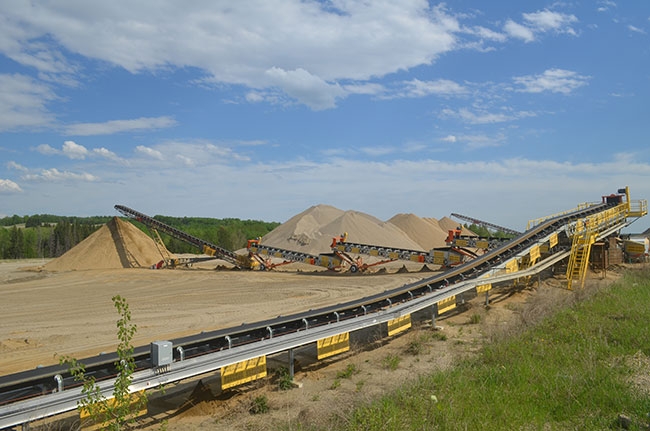 December 6, 2017 – To say that Lafarge Canada’s concrete aggregates operation is a staple in Onoway, Alberta would be a tremendous understatement. The operation dates back more than 100 years in the community of just over 1,000 residents located about 60 kilometres northwest of Edmonton.

Of course, like all things built by man, over time things break down or become out-dated and require replacement, and Lafarge’s Onoway Wash Plant was no exception. So, to keep up with market demands and the company’s latest health and safety requirements, a brand new plant was constructed that started up two years ago. The plant was built by upwards of 60 employees and contractors over a six-month period with no on-site accidents or
incidents.

While constructing the new plant, Lafarge took the opportunity to re-design the layout to improve efficiencies.

Three key elements were considered when planning out the design of the new Onoway Wash Plant: safety, quality and capacity.

Safety
The structural integrity of the old plant required the construction of the new facility. The old plant was aging due to a combination of Father Time and harsh Edmonton winters. When building the new facility, Lafarge opted to construct it using galvanized steel, which has an average lifespan of 42 years. The structures were built by Kreator Inc.

“We are continuously looking for ways to improve the safety of our operations to ensure our employees get home safely,” Morrey says.

In addition to high-end structural materials, the plant was outfitted with conveyor guarding on all the conveyors; with all of the pullies and belts for the conveyors matching and interchangeable to make maintenance and replacement of parts easier. The belts are equipped with speed sensors and pull cords throughout the facility.

Ryan Brown, works manager overseeing all the operations within the Onoway area including the wash plant and the source pits, where extraction and reclamation are still ongoing, says the addition of modern, generic interchangeable replacement parts has been helpful on the maintenance side of the operation, since the old plant sometimes required replacement parts that were no longer being manufactured.

Improved access to the various sections of the plant for maintenance staff was also incorporated into the new design, including dual catwalks offering near 360-degree workspaces in many areas.

“The whole plant was built to Alberta OH&S standards; as well as company standards which stretch even further to care for our employees,” says Brown.

Improved quality
The new Onoway plant was built with a special mirror image, four-jig system – the first of its kind in the Edmonton area. AllMineral, a German company that specializes in the processing of gravel, sand, coal and ore, designed the jig system for Lafarge.

“It removes the coal, which is a problem for concrete aggregates,” explains Morrey.

The aggregates in the Edmonton area tend to have high levels of coal and iron (Edmonton area aggregates are almost entirely sand and gravel with the closest quarries in the province near the Rocky Mountains). By removing the coal from the pre-crushed aggregates used in the Onoway operation, the jig system allows the plant to produce premium-quality concrete aggregates.

Using traditional methods without the jig system, the concrete aggregates would typically have upwards of one per cent coal. But with the new system in place, that number drops to less than 0.01 per cent.

“The system we have in place here at Onoway today, is the most sophisticated system and efficient system at removing coal and deleterious materials within the region and the Province of Alberta,” Morrey says.

The jig systems installed at the Onoway Wash Plant for Lafarge’s rock and sand is an air-pulsated water system that pulsates air upwards causing deleterious foreign matter to float to the top to be pushed away from the final material.

To ensure the product is hitting the customer-required specs, it goes through rigorous testing procedures.

Brown says the product is tested at four stages: pre-crush (at the excavation source), post-crushing, washing process and shipping. This is in addition to being tested at the source for ironstone. He says between two and three tonnes of coal are removed daily from the processed aggregate using the new jig system.

The noise from the new jig system had created some concerns, so the company enclosed the system in noise barriers. To control the dust from the operation, the company equipped the plant with a water spray dust suppression system.

Capacity
Increased capacity was a key factor for the construction of the new Onoway wash plant. The old plant had a maximum capacity of 330tph. With the new plant, Lafarge has the ability to increase capacity as high as 700tph, depending on feed material, although the plant is typically maxed out at 525 tph to avoid potential bottlenecks.

“The plant could produce up to 1 million tonnes per year,” Morrey says. “Right now there’s an over-capacity, but for the last five years there was an under-capacity… the capacity component was critical.”

The plant’s increased maximum capacity is vital for Lafarge’s operation. Due to weather constraints, the plant typically produces and washes aggregates for six months of the year, which means the operation needs to produce a year’s worth of product in about half the time.

Although concrete aggregates sales in the area slow down in the winter months, they never completely stop so stock is always needed.

New investments
Lafarge made numerous upgrades at the new plant in addition to the galvanized steel structures and its new jig system including four new Thor stackers, Terex Cedarapids screen decks, and investments into ScanLink in all of its mobile equipment – a safety sensor system that alarms in the cab of the vehicle if a worker is within five metres. The technology is triggered by sensors located in an employee’s hardhat or vest.

“Another investment was the solar-powered scale, which replaces a fuel powered generator that created added noise; and overall it’s better for the environment,” Morrey adds.

“There’s a lot more recycled water in the mix now,” Morrey says, adding that the same amount of water is being used at the new site that was required at the previous plant. An impressive feat when you consider how significantly production has increased.

To manage the trucks going in and out of the facility, Lafarge equipped the plant with geo-fencing that allows staff to monitor the locations and turnaround times for all of the trucks on site.

A good mix
Lafarge’s Onoway plant is a significant employer in the area. The plant typically has 30 on-site Lafarge employees and between 15 and 20 people hauling material to the plant.

At peak times of the year, there can be as many as 100 people working for Lafarge in Onoway, including the portable crushing plant, and the ongoing earthworks activities.

“Several of our washplant employees are residents of Onoway or live in the Onoway area,” Brown says. “Our site has a strong balance of experienced and ambitious workers and personnel.”

And with a new, safe operation with increased capacity, improved quality of product, and a better environmental footprint, Lafarge is ensuring that the more than 100-year-old operation will continue to offer employment opportunities to people in the Onoway community for years to come.