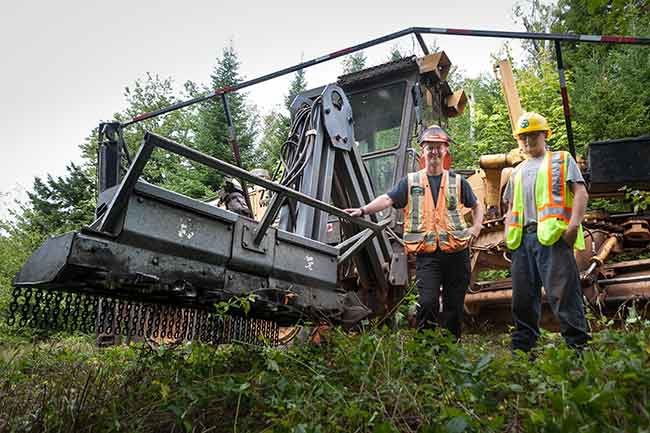 September 25, 2016 – Mac Davis had a problem. As the woodlands manager and equipment manager at C. E. Harrison and Sons Ltd. – a multi-generational, family-owned logging and forestry company based out of Parrsboro, N.S. – he was tasked with maintaining the roads running through the sizable forest regions his company has accumulated since it first began operations in 1934.

“We own 25,000 acres of managed, forested land, and there are a lot of forest roads on it,” he says, explaining the nature of his dilemma. “Over time, many of those roads started to grow in, due to the surrounding vegetation. The more time passed, the worse they got. Roads actually started to get lost, so to speak, just because the trees grew in and they were no longer passable.”

While looking for an effective and cost-efficient solution to his problem, Davis came across the Gilbert GM-6 Brushcutter, a brushcutter-mower head that attaches to the side of a motor grader or other carrier for easy roadside maintenance.

“We did some research and determined that we needed something to help us clear our roads,” Davis says. “We looked at a number of farm tractor-type options, but one of the reasons we went with the Gilbert GM-6 was that we already had a grader, and the GM-6 mounted easily on the side of it. We went to an equipment show in Moncton to have a look, and the more we saw of it, the more we liked it. We ended up buying one, and everything has been great ever since.”

The beauty of the GM-6 lies in its convenience and efficiency. The attachment offers a total reach of 4.9 metres (16 feet), which makes it ideal for thorough maintenance of roads with side ditches and slopes. What’s more, when it’s not in use, the arm folds tight to the grader, avoiding interference with the grader blade and allowing for fast transitions between road grading and brushcutting functions.

“What’s amazing about this machine is that I can actually go in, bush cut a road, and then turn around and grade the road right afterward,” says Davis. “That’s what’s great about using a grader. A farm tractor can’t do that. With this, you clean the whole road up, and you’re right back to the day you built it.”

Even more impressive than its ability to transition, though, is the power and speed with which Gilbert’s attachment clears roadside vegetation. That’s because the GM-6 uses patented technology that cuts through vegetation, rather than mulching it, which allows it to slice through stems and trunks up to 20 cm (8 in) in diameter and clear roadsides at up to four times the speed of conventional brushcutters.

In his role as a senior researcher with FPInnovations, Mark Partington had the opportunity to witness the GM-6 firsthand during a demonstration in New Brunswick in 2014. He came away impressed with what he saw.

“Many of these brushcutters function like large lawnmowers,” he says. “The difference with the Gilbert head is that rather than a few large knives, it actually uses rotating saws, which are pretty heavy duty. They can cut through small vegetation very easily, but they also have the potential to cut through larger vegetation – small trees and that type of thing. These are things that other types of systems either can’t do, or can’t do at the same rate.”

C.E. Harrison and Sons Ltd. out of Parrsboro, N.S. recently invested in a Gilbert GM-6 brushcutter to help maintain its vast collection of resource roads

Though his time observing the machine was brief, the GM-6 left a lasting impression on Partington.

“There’s no shortage of attachments or pieces of equipment that you can use to cut roadside vegetation,” he says. “Because of its cutting power and its high capacity, though, the Gilbert has a greater potential to achieve higher productivity than other machines would.”

“We bought it two or three years ago, and we’re at the point now where we’ve gone over almost all of our road system,” he says, reflecting on his good fortune. “We’re getting close to going around again and doing simple maintenance on them.”

That’s not to say he isn’t busy, of course. His company’s work with the GM-6 has earned them contracts with a number of new clients, including the Nova Scotia Department of Natural Resources. Davis, however, is beginning to notice a pattern: wherever the GM-6 goes, it leaves having made a few new fans.

“It’s the kind of machine that sells itself,” he laughs. “When people have us do jobs for them, they see the attachment and the job it does, and they want one for themselves.”