An update on the Gordie Howe International Bridge 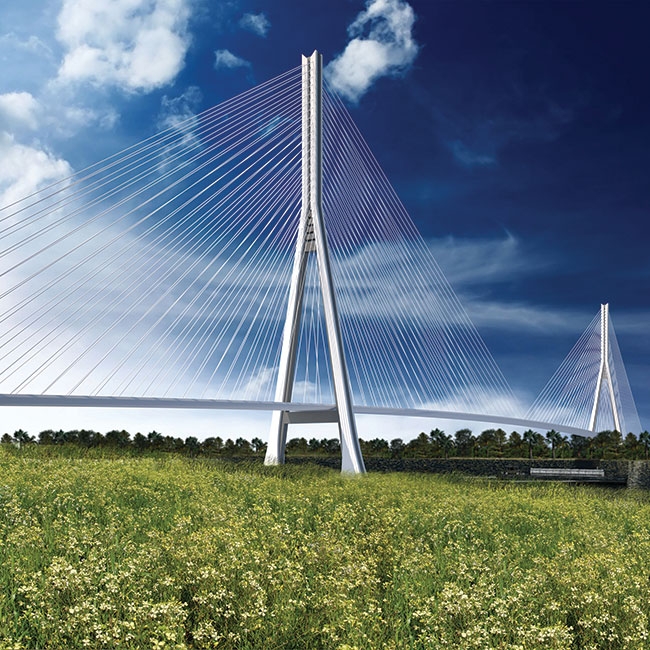 Construction of the Gordie Howe International Bridge over the Detroit River at Windsor is on track to begin in 2018, as originally promised, according to Michael Cautillo, president and CEO of the Windsor-Detroit Bridge Authority (WDBA) that is managing the project.

A formal request for proposals (RFPs) was given last fall to three teams of finalists selected to bid on building the massive span and the WDBA has been working with them to ensure they have the information they need to understand the project and complete their bids.

“We are in constant dialogue with the proponents to understand their needs as they complete their proposals,” notes Cautillo.

The timetable for proponents to submit information is being reviewed, which isn’t unusual for such a large construction project, the WDBA maintains, as it will ensure the procurement process will yield the best possible results without compromising the start date.

However, Cautillo says that since issuing the RFPs, the WDBA has been clear that the private-sector partner would be announced sometime in 2018 – and that has not changed.

“WDBA remains committed to having a private-sector partner in place in 2018 and construction starting on the bridge in 2018,” he says.

While the bidding process is underway, the WDBA has been putting in place other pieces to ensure the private-sector partner can begin work as quickly as possible.

Work crews have been busy readying the ports of entry on both the Canadian and U.S. sides.

About $200 million was earmarked for work at the Canadian port-of-entry. Much of it has been completed, including a perimeter access road, placement of fill, grading and drainage. Two high-pressure natural gas pipelines were also relocated to allow for the bridge.

Work crews are finishing up on relocating a complex network of high-voltage electrical distribution and transmission lines. The lines are being relocated underground or to new overhead locations. The lines are part of a massive transmission system that circles Lake Erie, and brings power from New York north to Ontario, then across the river to Detroit and back to New York.

The Canadian port-of-entry is about 53 hectares and will have inbound and outbound inspection facilities, toll collection booths and a maintenance facility.

On the U.S. side, preparatory activities are underway and include utility relocation, survey work and site investigation. The Michigan Department of Transportation has acquired more than 70 per cent of the required property for the U.S. port-of-entry.

WDBA director of communications Mark Butler says the venture is the largest infrastructure project along the Canada-United States border and addresses a number of issues.

“The bridge project addresses future needs and will provide six lanes – three in each direction – to meet the anticipated growth in traffic over the years to come,” he says. “It will also provide for redundancy at the busiest trade corridor between Canada and the United States, with improved border processing and highway-to-highway international connectivity.”

The bridge will cross the Detroit River about two miles downstream from the Ambassador Bridge in the west end of Windsor. It will connect Windsor and Detroit by linking an extension of Highway 401 called the Rt. Hon. Herb Gray Parkway with Interstate 75 in Michigan.

The bridge will be either a cable-stayed or suspension bridge about 2.5 kilometres long. Once completed, it will be among the top five longest bridges in North America. A dedicated multi-use path 3.6-metres-wide will accommodate pedestrians and cyclists. The WDBA has asked the bidders to include the path in their design, with it located on the east side of the bridge. Barriers will separate pedestrians and cyclists from vehicular traffic.

The span itself will be publicly owned by Canada and Michigan and is being delivered through a public-private partnership.

Butler says increasing transportation capacity and minimizing delays at the border will encourage new investment between Canada and the United States, ensure that manufacturers remain competitive and help to create thousands of jobs, either directly as a result of the construction, operation and maintenance of the corridor and through economic spinoffs.

The three proponents vying to build the bridge are Bridging North America, CanAm Gateway Partners and Legacy Link Partners. They were pre-qualified through a Request for Qualifications stage.

The WDBA has asked the proponents to put bids together on designing, building, financing, operating and maintaining the bridge, adjacent ports of entry and an interchange. They’ve also been asked to include a fixed price and construction schedule.

Once proposals have been submitted, they will be evaluated by a team comprised of WDBA officials, partner organizations and experts, and overseen by an independent fairness monitor.

Butler says once a preferred proponent is selected the WDBA will then work to finalize terms of a project agreement, resulting in financial close.

He says the WDBA anticipates that construction of the bridge will start as soon as possible after financial close.

WDBA board members have said in the past they expect it will take four years to build the bridge, pushing its opening back to at least 2022.

The WDBA isn’t ready yet to put a price tag on the bridge, or say when it will be completed.

“To protect the best interests of taxpayers, it is not appropriate to discuss cost estimates for the entire scope of the contract during the procurement phase,” explains Butler. “Doing so could jeopardize the competitive process. A final contract cost will be announced once a successful private-sector partner has been selected.”

The WDBA will have more certainty around the construction timeframe once it receives proposals from the proponents, he says.

The mega-project had been on tenderhooks while months of tense negotiations took place between Detroit and officials with the WDBA. In July, Detroit city council signed off on a $48-million (U.S.) deal that hands over city-owned land required for the bridge and provides support to residents living in the community of Delray, an industrial area in southwest Detroit, where it will be located.

Canadian taxpayers are fronting the money to pay for the deal but the plan is to recoup the money through tolls after the bridge is built.

Butler says Canadian authorities are pleased with the announcement by the City of Detroit to invest the money from the sale to neighbourhood redevelopment, job training and health monitoring for residents in the Delray community.

The WDBA is working, and will continue to work closely with many partners, including the City of Detroit and the City of Windsor, to move the project forward, he says.

“With each achievement we are one step closer to the Gordie Howe International Bridge becoming a reality.”

Ontario Premier Kathleen Wynne said in a statement that two-way trade between Ontario and Michigan totalled $74 billion in 2015, highlighting the importance of the trade relationship.

“Moving forward on the Gordie Howe International Bridge project will support the growth of this significant trade relationship, help create jobs and enable us to remain competitive in today’s global economy.”