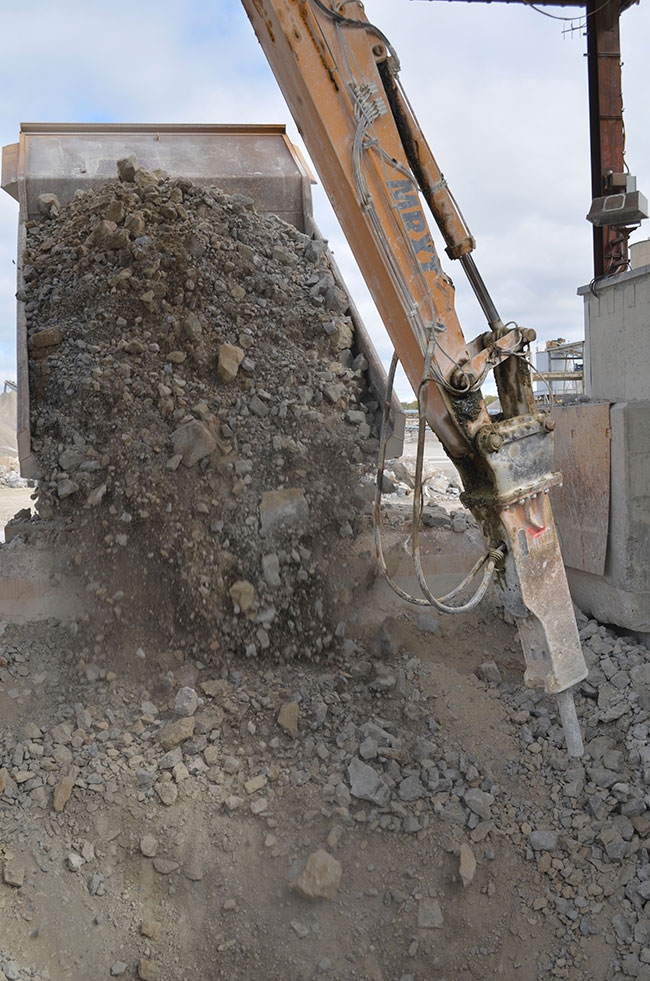 Finding efficiencies throughout the quarry is paramount for competing in today’s Canadian aggregates market.

Finding efficiencies throughout the quarry is paramount for competing in today’s Canadian aggregates market. Each phase of stone, sand and gravel production provides areas where efficiencies can be introduced with the introduction of new, or efficient, technology.

Such is the case at the primary crushing stage of quarry operations, which can create a bottleneck for the entire production cycle if it does not operate both efficiently and effectively with minimal downtime. In order to keep the primary crushing operation humming, there needs to be an effective system in place for quickly breaking down the massive chunks of rock that are removed from the ground.

There are different solutions used depending on the operation. Go to a handful of quarries in the same region and you will find some using an excavator bucket to break pieces into smaller sizes before being loaded for the crusher, while other quarries use a breaker/hammer, often attached to an excavator or loader, to reduce the rock size.

But sometimes that still isn’t enough, as large pieces reach the primary crusher and clog the crushing operation, causing unnecessary downtime that hurts the efficiency of the operation. That’s why, in many quarries, a hydraulic hammer or breaker has been introduced as an attachment at one side of the crusher, providing a quick solution to break down oversized pieces of rock.

That is the case at one of Canada’s largest and most efficient quarries, which is providing a close-to-home aggregate solution for infrastructure growth in one of Canada’s major centres.

The quarry’s Nordberg gyratory crusher employs a MRXT36 Turn Table Style rockbreaker system with a BT5500 Impact Energy Hydraulic Hammer. The system is controlled from inside of the Operator’s station by a pair of joysticks. Breaker Technology Inc. (BTI), an Astec company that manufactures hydraulic hammers, rockbreakers and breaking systems in nearby Thornbury, Ont, makes both units.

The hammer acts as a rake for the inside of the crusher to provide an even distribution of rock, while also solving any immediate needs to break the rocks into smaller pieces before being fed through the gyratory crusher. According to BTI, this combination of raking and breaking provides crusher efficiency of up to 15 per cent.

The MRXT36 replaces a former BTI system that was in place at the quarry. BTI worked through some issues with the quarry’s maintenance staff before getting the breaker to the calibration and productivity level expected by the quarry’s management team. There is also a second BTi unit in use at the quarry. A BXRB50 hammer is attached to a Cat 336E excavator, which helps reduce the rock size coming out of the quarry before being loaded into the truck for transport to the primary crusher operation.

On the maintenance side of the operation, the breaker is equipped with an Auto Lubrication System that addresses the daily maintenance requirement. That is complimented by, as it would with other heavy machinery, a daily walk around to make sure there are no glaring issues starting to appear on the unit, or that something hasn’t happened to cause exterior damage during the previous day’s shift(s). This also provides an opportunity to ensure that lubricant levels are maintained, and that the unit temperature is where it should be for optimum operation.

The rock breaker also has 500-hour and 2,000-hour maintenance requirements. Every 500 hours, the unit goes through a thorough examination and unit maintenance that includes filter changes. Then every 2,000 hours, wear components are examined, including pins and bushings, and notations made regarding further rebuild needs or opportunities for further preventative maintenance of the unit.

The reasonable maintenance cycle makes the hammer an invaluable piece for keeping the quarry running at peak efficiency. If you are not already running one as part of your operation, you should explore this as an investment in your efficient operation.