Ridgeway, S.C. – Bomag Americas partnered with its Fayat Group sister companies, Secmair and Marini-Ermont, for an expanded presence at CONEXPO-CON/AGG 2020 in Las Vegas, Nev. in March.

Bomag displayed their full lines of both heavy and light compaction equipment, as well as expanded and revamped offerings for both pavers and milling machines. For this year’s show, Bomag/Fayat Group increased the booth footprint to more than 17,300 square feet, nearly double their booth size at the last show in 2017. 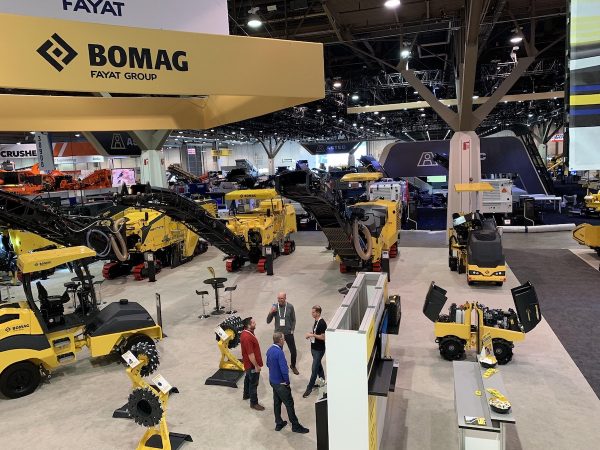 CONEXPO-CON/AGG 2020 drew a registered attendance of more than 130,000 for the week and 2300-plus exhibitors. The total exhibit square footage was a record 2.7 million-plus. Photo courtesy of Bomag

On display in the Bomag booth was their complete line of cold milling machines, from the newly updated second-generation compact BM 600/15-2 model to the new BM 2500/75, the largest model in the product line. The revamped BOMAG BM 600/15-2 compact mill features a reengineered vibration-isolated operator’s station that improves operator efficiency and productivity. The BM 600/15-2 provides a maximum milling width of 23.6 in (600 mm) for working in tight spaces.

The BM 2500/75 is the newest and largest milling machine in the Bomag product line. This high-production model is powered by a 771-hp (567-kW) diesel engine with efficient mechanical drum drive for the 8-ft 2-in (2,500-mm) wide cutter. The BM 2500/75 delivers cutting depths reaching 13.8 in (350 mm) with three milling speeds – ECO (100 rpm); Universal (112 rpm); and Speed (131 rpm) – providing the optimum balance between productivity and efficiency with reduced fuel consumption and wear.

The Bomag pavers on display at CONEXPO spanned from the commercial-sized BF 200 and BF 300 pavers to highway-class features found on the new CR 820 model to the highway-class CR 1030 paver. At just 13,228-lb (6,000-kg) operating weight and 51-in (1,295-mm) transport width, the compact and nimble BF 200 paver can be transported to jobsites on a trailer. At home paving paths, on the golf course and road rehabilitation projects, the paver’s narrow 44-in (1,118-mm) track width fits in the cut of a 4-ft (1.2-m) cold planer to boost efficiency of mill-and-fill applications.

The future of compaction

On display in the Bomag CONEXPO booth was an updated BW 206 AD-5 AM roller with Asphalt Manager 2. It meets market needs in the Americas for advanced compaction technology combined with ROPS canopy. Asphalt Manager 2 automatically adjusts compaction forces from vertical to horizontal as mat stiffness increases to prevent over compaction, plus its standard infrared camera gives operators mat temperature data.

Another new compaction offering from Bomag is the free Bomag App. Bomap demonstrates how it documents roller passes and captures and records compaction values from a standard smartphone or tablet. BOMAP is easily transferrable, regardless of roller brand, identifies soft spots in the base, and logs temperatures, Evib values, frequency, amplitude and more. 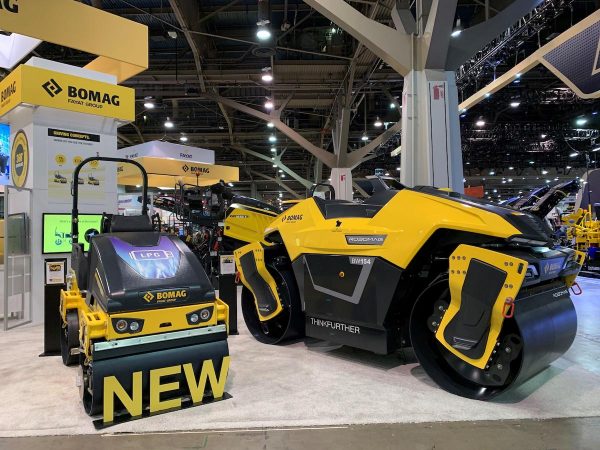 Robomag has the option of wireless remote-control operation for loading and unloading. Photo courtesy of Bomag

Bomag rolled out three concept roller models at CONEXPO. The first being Robomag, a fully autonomous concept roller based on the Bomag BW 154 tandem roller. In addition to the fully automatic mode, Robomag also has the option of wireless remote-control operation for loading and unloading.

Looking to the future, low emissions will play an increasingly important role alongside performance and cost. Bomag developed two alternative drive concept versions of the BW 120-Series roller, one with electric drive (BW 120 E) and one using exchangeable LPG tanks (BW 120 LPG). On display for the first time in North America, the two models demonstrate that no matter the situation or drive requirement, Bomag is working on a solution for every construction site.

Each year EquipmentWatch.com compiles machine data to present awards for the Highest Retained Value and the Lowest Cost of Ownership in the construction, lift and agriculture industries. Bomag was honoured with two industry awards at the show. The BW 120 AD Light Tandem Roller was recognized as having the Highest

Retained Value by EquipmentWatch. The average age of this machine in the market is 11.7 years and the
BW 120 AD is projected to retain the highest percentage of its original value after a five-year period in its roller class. The second Bomag award from EquipmentWatch was for the Lowest Cost of Ownership over a five-year period. This honour went to the BW 211 D-5 Single Drum Roller. Bomag offers these machines with options like Economizer for optimum compaction results, Variocontrol for automatic amplitude adjustment, and Bomag Telematic for real-time monitoring of pending maintenance and service history.

CONEXPO-CON/AGG 2020 drew a registered attendance of more than 130,000 for the week and 2300-plus exhibitors. The total exhibit square footage was a record 2.7 million-plus.