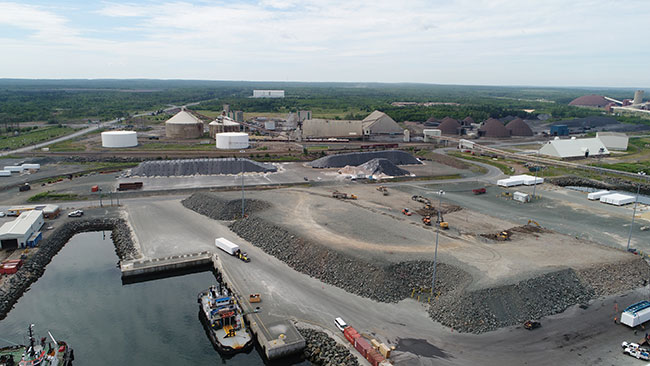 Preloading Terminal 4 with a quarter-million tonnes of rock. Photo: Port of Belledune.

Christmas came early last year to contractors with the launch of a $34-million capital program at the Port of Belledune, located deep inside the Chaleur Bay off the Gulf of St. Lawrence in northern New Brunswick.

The work includes raising the level of Terminal 4 and harbour infill projects that will ultimately use over 1.6 million tonnes of rock and other aggregates.

The Port of Belledune celebrated its 50th anniversary in 2018 and recorded 2,625,334 tonnes of cargo in 2019. Open to marine traffic year-round, its Terminals 3 and 4 have a combined 27.3 hectares of outside storage space for ro-ro (roll-on-roll-off) break bulk, project cargo and bulk commodities, as well as conveyors, pipelines to warehouses and tank farms.

The port has been expanding its bulk cargo business, which now ranges from armour stone to lead concentrate to wood chips. As a result, its laydown terminals have begun to fill up and bottlenecks in how product is moved around have become more apparent.

The capex program is jointly funded by a $5-million grant and a loan of up to $2 million under the Northern New Brunswick Economic Development and Innovation Fund, a $17-million contribution from the Government of Canada under the National Trade Corridors Fund, and a $10 million investment from the Belledune Port Authority itself.

The work includes stabilizing the 6.2-ha Terminal 4, which was originally built for lighter laydown cargo such as equipment and windmill parts and raising it by approximately one metre as part of a climate change mitigation strategy.

“We noticed in the last number of years, when we have major storms, we get a lot of wave action and water up onto Terminal 4,” says Denis Caron, CEO of the Port of Belledune.

To stabilize Terminal 4 last July, Roy’s Trucking and Landscaping Ltd. began by hauling in 250,000 tonnes of rock, sized 0 to 600 mm, from its quarry five kilometres from the port. This ran to around 19,000 tandem truckloads, piled about eight metres high on the east side of Terminal 4.

The Port chose pre-loading from several possible methods, which included drilling holes and pounding aggregate into them to make rammed aggregate piers. Pre-loading was the most economical option, carried with it the least amount of risk, and required no special equipment.

“We could readily source the material and reuse it for the infill. Basic equipment was required, and we could work in the rain,” explains Jeffrey David, director of engineering, Port of Belledune.

To monitor the ground compression, steel plates, called settlement plates, with vertical pipes welded to them, were placed here and there. Daily elevation shots monitored the compression, and more vertical piping was added as the pre-load grew in height.

“Settling follows a curve that can take a very long time to flatten, so geotechnical experts were hired to judge when the process was complete. It takes someone with the technical expertise and experience, the knowledge of the compressibility of the soil and the rebound effect, to say that the curve is flat enough,” David says.

By August the pre-loading had done its work, and Roy’s spent a month removing all 250,000 tonnes of rock back to the original ground and relocating it to the west side of Terminal 4 for its compression treatment. 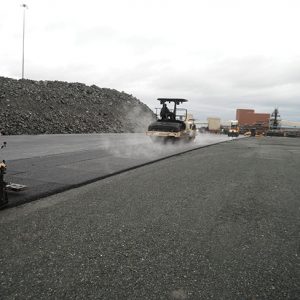 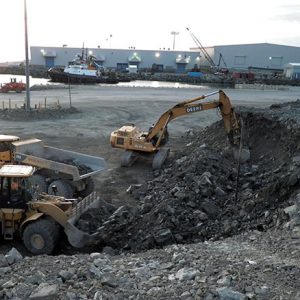 Removing the pre-load to the west side of Terminal 4. Photo: Port of Belledune.

R.H. Frenette Group Ltd. trucked in about 30,000 tonnes of granular fill and about 19,000 tonnes of base and sub-base aggregate from the Roy’s Trucking quarry to raise the ground level on the east side of Terminal 4.

Now early September, Isidore Asphalte Ltd., working as a sub-contractor to R.H. Frenette, rolled in to lay down the base foundation on the east side of Terminal 4, to the tune of 15,000 square metres, or just under 2,500 tonnes. This course was Type “B” asphalt (NBDOT spec base asphalt), 65 millimetres thick.

With a team of seven people, Isidore used a John Deere 672GXDW grader, a John Deere 310SL backhoe, and an 84-in Ingersoll Rand DD110 vibrating roller to prepare the ground for paving. For the paving Isidore used an 84-in Ingersoll Rand DD138HF vibrating roller, a static Dynapac CP142 pneumatic roller, and a 15-ft LeeBoy 8515D finisher.

“We laid the asphalt in two operations. We spent five days for the first phase and two days for the second,” says Ronald Losier, vice-president, Isidore.

The pre-loading material will be removed from the west side of Terminal 4 later this year, or in 2021, and used to fill in the water lot between Terminals 3 and 4. Some 150,000 tonnes of granular fill and 50,000 tonnes of aggregate base and sub-base will be used to raise the remaining laydown area, the wharf deck and the surrounding vehicular access areas, and to cover the rock infill in the water lot.

Once the preparatory work on the west side of Terminal 4 is completed, a contractor, yet to be chosen, will lay down one 65-millimetre thick course, or 7,400 tonners of Type “B” asphalt (NBDOT spec base asphalt), and a 35-mm thick course, or 5,300 tonnes of Type “D” asphalt (NBDOT spec seal asphalt) over the entire Terminal 4 laydown space. The improved laydown space is designed to handle a loading of 150 kPa.

The water lot between Terminals 3 and 4, currently a tug wharf berth area, will be dredged and the removed material placed in a dredge containment cell in the Terminal 3 infill area and pre-loaded. Why dredge instead of pre-loading?

“We preferred the option of dredging down to bedrock because the bedrock is shallow, and there would be no surcharging of the area. The terminal operators want to run mobile conveyors over there, and we didn’t want a big pile of material left there. We also need to dredge as part of the new tug wharf construction; therefore, mobilization costs will already have been incurred,” David explains.

Just when the Terminal 3 expansion will begin is not yet settled, but its completion is not expected before 2022. The approximately 1,200,000 tonnes of rock fill and 80,000 tonnes of aggregate base and sub-base required to infill this water lot will certainly keep local quarry operations busy.