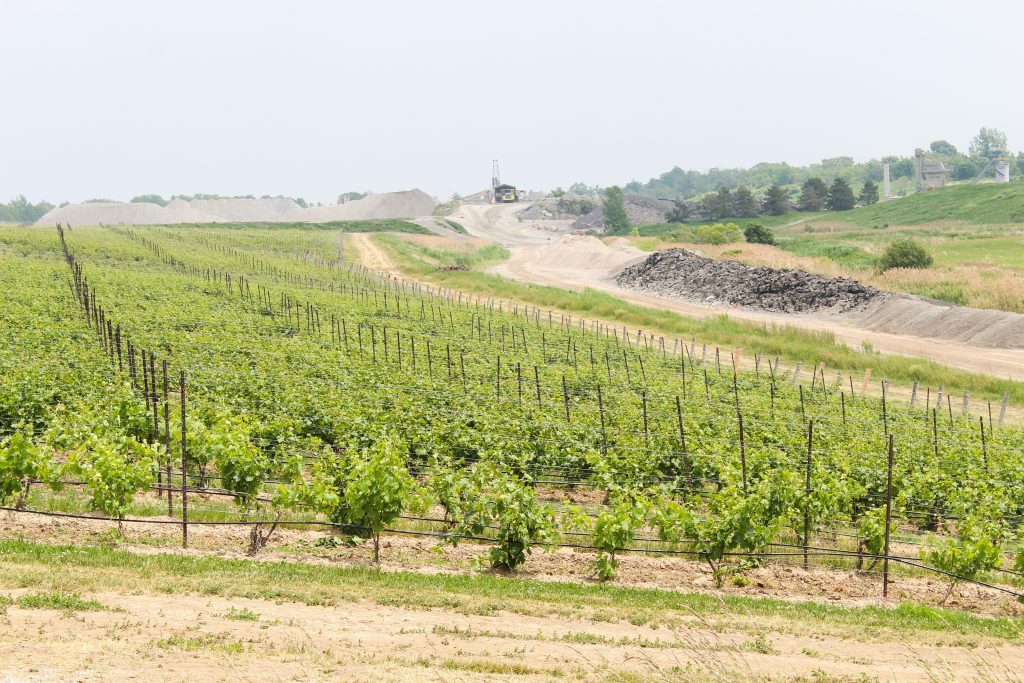 Walker Industries has been producing stone, sand and gravel for over 130 years and creating vineyards and beehives along the way. Through the company’s aggregates division, with quarry operations in Ontario’s Niagara, Simcoe and Essex regions, Walker has fulfilled its commitment to rehabilitation and then some.

Land rehabilitation is a requirement of the Ministry of Natural Resources and Forestry. All Ontario quarries must have a comprehensive rehabilitation plan set out in the initial approval process and as part of their ongoing site management. For Walker this means progressively rehabilitating sites throughout the life of a quarry, returning the land to an approved or better state than it was prior to operations, in order to support the needs and character of the community.

For Walker’s Vineland quarry in the Niagara region this meant supporting Ontario’s thriving wine industry. Edgerock Vineyard was a quarry rehabilitation project started in 1999 through a partnership between Walker Industries and the University of Guelph. The goal was to create a successfully functioning vineyard on extracted land as part of a research project for agricultural rehabilitation. For John and Norris Walker who were running Walker Industries at that time, “They wanted to revolutionize quarry rehabilitation and were willing to experiment creatively to do so,” explains Frank Kielbowich, general manager for Walker Aggregates Niagara Region and the Western Greater Toronto Area.

In Phase 1 of the experiment, the quarry overburden was moved and regraded to shape the vineyard’s south-facing slope. The unique depth of the slope allowed for an increase in sunlight for the vineyard as well as the moderation of wind and temperatures on the land. This made it possible to grow a variety of grapes not typically grown in the area at the time including Sangiovese, Syrah, Petit Verdot, Cabernet Sauvignon, Cabernet Franc and Merlot.

During Phase 2, soil was tested and amended and a cover crop was established.

Phase 3 began in 2000 with the planting of 12,000 vines. By the end of the growing season that year, the vines were well established with the vineyard’s first harvest in October 2002. The next 15 years saw an additional 16 acres of plantings, improvements including a drip irrigation system, and the introduction of a new compost product (produced by Walker’s sister company, Walker Environmental) to enhance the growing process.

Over the years, grapes from Edgerock Vineyard have been used by many local wineries, some of whom are neighbours to the quarry. Vineland, Ont.-based Megalomaniac Wines, for example, formed a partnership with Walker Aggregates in 2018 and purchased the vineyard’s entire harvest that year. This enabled Megalomaniac to secure local grapes for its wines while allowing

Walker to contribute to the local community and economy in a new and innovative way. The once experimental vineyard has become an agricultural success and a benchmark for rehabilitation practices in the industry.

Walker Aggregates has implemented other rehabilitation projects that, like the Niagara vineyard project, make sense for the communities they are located in. Take for example the company’s efforts to provide pollinator habitats by dedicating a section of land at its Duntroon Quarry for local beekeepers to store their bees over the winter.

Other examples include planting native grasses, flowers and fauna to encourage pollinator repopulation, and establishing newly forested areas with native species and tree composition near the Bruce Trail in Simcoe to delight hikers and outdoor enthusiasts for years to come. Wherever the location, Walker makes quarry rehabilitation work for its communities.

Walker Aggregates is one of seven companies operated by Walker Industries, which has over 900 employees across Canada and the United States. This family-owned Canadian company has operated from its base in the Niagara region for over 130 years. All of the company’s divisions are bound by the values that drive their belief in supporting the environment and communities they operate in. To learn more about Walker Industries visit: www.walkerind.com.