Features Company Profiles Roads & Paving
Back Into the Blacktop 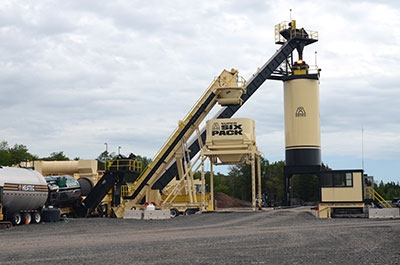 After careful consideration, Nova turned to Astec for the paving plant that would, once again, help the company pave roads in Nova Scotia. Photo courtesy of Astec.

Nearly three decades after leaving the paving side of road construction, Nova Construction, an Antigonish, Nova Scotia-based asphalt business, is back.

Nearly three decades after leaving the paving side of road construction, Nova Construction, an Antigonish, Nova Scotia-based asphalt business, is back. With road upkeep a major portion of the province’s highway budget, Nova regards asphalt work as a steady earner that will smooth out the bumps in its contract work.

“The biggest chunk of the provincial highway budget is for upgrading. Whether the provincial budget grows or shrinks, the paving budget is the biggest portion of it. Grading work comes and goes. It is not always at a consistent level of activity. I thought paving work was an opportunity for more steady work, to take out some of the peaks and valleys,” explains Donald Chisholm, president, Nova Construction.

Nova was incorporated in 1963. It began with heavy civil construction, such as roads and bridges. In 1966 Nova bought a portable paving plant, which it operated throughout Nova Scotia and Newfoundland.

Over the next two decades, Nova built and paved roads and carried out heavy civil construction projects. For example, between 1975 and 1978, Nova built 19 dams for the Wreck Cove hydroelectric project in Cape Breton, the largest of the province’s 33 hydroelectric plants.

In 1986, however, Nova sold its paving plant and specialised paving equipment. “The decision was made to focus on road building, surface coal mining and the development of the Porcupine Mountain Marine Quarry,” Chisholm says.

Nova continued earth moving and road building, and it also became more involved in surface coal mining in mainland Nova Scotia and Cape Breton. Possibly its most recognizable highway project of the 1990s was on the 45-kilometre long Cobequid Pass. This twinned toll road along the Trans Canada Highway between Truro and Amherst opened in 1997 as an alternative route to the old Wentworth Valley road.

Nova built about 25 kilometres of the Cobequid Pass and subcontracted the paving work to Bedford, Nova Scotia-based Dexter Construction. On other contracts, Chisholm says, “There were portions of the work that had a paving component to it. Some jobs were half paving.” His plan to restore paving to the company’s suite of capabilities was based partly on his desire to keep more of each contract’s work, and the profit, within the company, but there were other reasons as well.

Nova has a lot of earthmoving equipment, but in recent years the highway projects have not placed a big demand on the fleet. “We haven’t done a large earthmoving job in three years, but we are on our seventh bridge since 2009. But bridges do not use up a lot of equipment. Our last earthmoving project was 450,000 cubic metres. A bridge project of 50,000 cubic metres is rather insignificant,” from an earth moving point of view, Chisholm says

Several more things helped firm up Chisholm’s decision to reenter the paving game. He saw that a large percentage of the Nova Scotia Department of Transportation and Infrastructure Renewal’s (TIR) highway budget was for road repairs. The province is responsible for maintaining 23,000 kilometres of road, and the asphalt work that the work entailed became steady income for Nova.

Furthermore, says Chisholm, “Around 2008 there seemed to be a lot more grading work of interest to Nova – clearing land and building the roads. In 2008 we started bidding more frequently on Nova Scotia TIR contracts for earth work and grading.”

In 2009 the province launched a $163-million highway bypass around Antigonish. Phase 1, which covered eight kilometres of four-lane, divided highway, included 200,000 to 300,000 tonnes of aggregate and a mouth-watering 100,000 tonnes of asphalt. Nova wanted in.

“We bid [for] the Phase 1 paving job with no equipment. We didn’t get that job, but people were wondering what we were up to,” Chisholm recalls.

Then, after a local paving contractor decided to get out of the business, Chisholm made his move. In 2013 Nova purchased a 300 US ton-per-hour capacity Portable Double Barrel mobile asphalt plant from Chattanooga, Tennessee-based Astec. It arrived in Antigonish that June. Getting it ready included around a month of set-up time, recertification for its use in Canada and certification by Nova Scotia Environment.

As for assurances that the company could deliver the right product, Chisholm notes, “Most provincial work in Nova Scotia is end quality specification. You have a window to stay in spec.” As for asphalt expertise on the ground to complement the company’s accumulated knowledge gained from building roughly 800 kilometres of road, Chisholm notes, “A lot of the employees we hired have paving experience.”

On the Roadtec purchases, Chisholm comments, “We looked at a number of different brands of equipment, and had the time to do some research.  Most equipment today is good quality, but sometimes things like preference, price, or delivery can play into the decision. To date, we have been pleased with the equipment purchases.”

Nova bid on a first asphalt project in June 2013 and started laying asphalt in mid-August. By the end of the season the company had laid 50,000 tonnes of asphalt.

This year’s paving season began with some work out of Antigonish. Nova then moved its plant to Lafarge’s quarry in Folly Lake, Colchester County. Nova’s first contract is for a 16-kilometre, 52,000-tonne repaving job on the Cobequid Pass. Still working from Folly Lake, Nova will then move onto two smaller jobs in and around Truro, one for 10,000 tonnes of asphalt and the other for 12,000 tonnes.

Nova will be bidding on more work this year to round out the season, which usually ends in late October. Although its focus is provincial work, it will accept commercial and residential work, although on a catch-as-catch-can basis. Those smaller jobs need to be timed for when they are within striking distance of the paving plant when it is making asphalt for big-ticket contracts.

There are no regulatory obstacles to bidding on projects outside of Nova Scotia. However, there is no work in New Brunswick, Chisholm says. “New Brunswick has had a really, really low highway budget for a number of years.” Prince Edward Island lets its bids in small packages that are not attractive to off-Island companies, and there is also the challenge of getting aggregate to the Island, which cannot make any of its own.

Nova has come full circle and can once again do all of the road-building tasks, from cutting the trees to laying the blacktop.