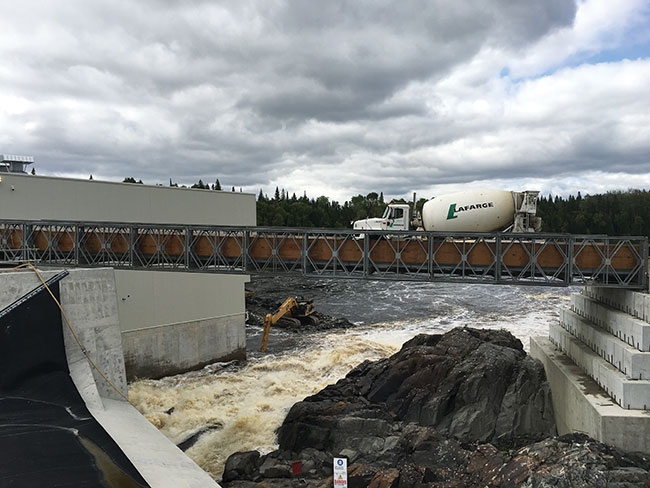 Any contractor that has worked in remote areas across Canada will tell you that getting materials to a site isn’t a walk in the park.

So when Lafarge Canada was hired to supply materials for the construction of the 16-MW Run of River Hydroelectric Power Station south of Smooth Rock Falls, Ont. – a partnership between Boralex and First Nation partners Taykwa Tagamou Nation (TTN) and the Mattagami First Nation – they knew there would be some challenges. Building the power station that was designed to generate 87,000 megawatt-hours of renewable energy annually (enough to power about 12,000 average Ontario homes) meant supplying 20,600 cubic metres of ready-mix concrete over nine months (Fall 2016 to Spring 2017), while managing the work through a harsh Northern Ontario winter and a small resource road for delivering the aggregate materials to the site. The construction site for the Run of River Hydroelectric Power Station project was a remote area northeast of Timmins about 90 minutes, through a small resource road located deep in the bush.

The project required high-quality concrete for mass pours, including during the unforgiving winter months, which meant trucking anything to the site would be extremely challenging. The project had foreseen to construct an ice road to transport materials across the river, but the weather was not stable enough to ensure safe crossing. To ensure the concrete could be delivered without creating delays, Lafarge chose to install a portable plant at the project site; and staffed it with a dedicated team to ensure smooth operation of the plant and on-time delivery of the concrete. The plant took 10 working days to erect and five days to dismantle.

“Through the winter of 2016-17, we set up a concrete plant there and delivered concrete within a couple hundred metres of the dam. It all worked out,” says Andrew Stewart, general manager for Lafarge Canada’s North & Central Regions, including projects and mobile solutions.

In the end, the project ran so smoothly it was awarded the 2018 Infrastructure Award at the Ontario Concrete Awards. That said, Stewart’s team still had to overcome challenges associated with the harsh climate. One of the biggest challenges was keeping a strong supply of water running throughout the plant.

“At -40C water lines froze, the river froze, the weather was very much up and down,” Stewart recalls, adding there was extreme temperature fluctuation over the course of the winter forcing his crews to adapt to whatever was thrown at them. “It was a really bizarre winter. One week I was there it was a little above 0C, and then the next week it was -42C.”

To combat the cold, Lafarge used heat tracing a great deal for any line that could be frozen; created building enclosures to try and keep the machines warm; a heated garage so maintenance could be done indoors; and the ready-mix concrete plant was completely enclosed, insulated, and heated with a boiler system.

To supply the on-site plant, concrete aggregates were transported via sub-contracted haulers from two locations: a concrete sand pit eight kilometres from the construction site, and a concrete stone quarry 45 kilometres away.

During the winter months, the resource road was the only way in and out of the project site.

“Everything had to come through a very narrow, single-lane logging road, about 27 kilometres off the main road,” Stewart says. “Luckily there were no incidents, which we were happy about – there were no safety incidents at all on site, which is pretty awesome. The general contractor did a good job of maintaining the roads over the course of the project. People could get out relatively well, and were good at communicating where trucks were. There was no truck-on-truck interaction on the road, which is what you want… big trucks could fit through, just not two at a time.”

Good people are key
Lafarge’s team did a great deal of planning and took special measures to ensure successful delivery of the concrete on this project, but none of these measures were as vital to the operation as the people working on the site, according to Stewart.

“We have resilliant Ontarians to do the work, which was probably the biggest key to the success,” he says.

In addition to offering employment opportunities to local First Nations communities, the company also created a scholarship managed by Indspire that provided $48,000 in post-secondary training and education for Indigenous youth across the north in the construction industry.

“There were a decent number of scholarships given out that focused on studies predominantly in the construction sector – civil technicians, that type of thing,” Stewart says. “This was especially good for people who want to work outside of towns… anywhere we can try and get people more interested to merge with our needs is a good opportunity.”

Lafarge’s Projects & Mobile Solutions team offers the company a big advantage when dealing with projects of this nature.

“We’re always having portable concrete plants set up and delivering in special places,” Stewart says. “The team in place is very experienced. Having that team in place takes away a lot of the risks and concerns you have. Yes, we have challenges with winter conditions and accessing the site with the small road… but having the team there with the experience, they were issues they could overcome rapidly.”

So, what kind of individuals are great fits for a special team like this one?

“You’re looking for a combination of people who are adventurous, but competent, very safety focused, and have created a life around themselves that allows them to do these amazing things,” Stewart suggests.