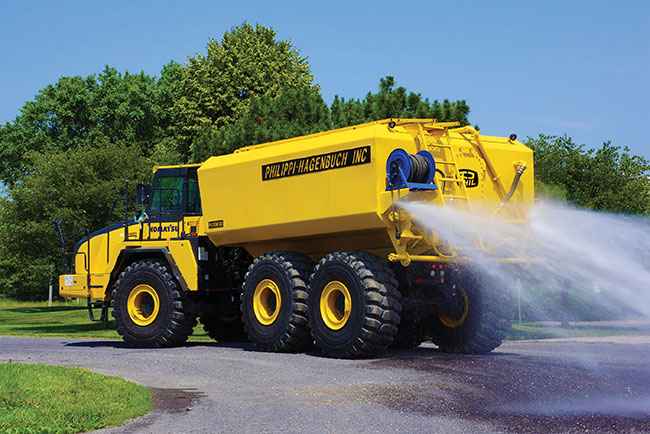 Successful aggregate managers know multiple factors contribute to their profitability, from minimizing their trucks’ cycle times to ensuring their crew’s safety. Even support equipment, such as water trucks, can’t escape their analysis — or at least, they shouldn’t. How equipment operators haul and apply water can significantly impact overall productivity and safety. Though water trucks appear basic in application and design, several factors have a significant impact on efficiency, from the challenges of water movement in the tank to the steel used in the tank’s construction. All of these factors impact uptime, maintenance, efficiency and safety. The key to a productive and safe solution lies within the truck’s water tank design.

It’s Hip to be Square
Rounded water tanks are the most common. They get the job done, but not without challenges. The tank’s curved sides raise the water’s center of gravity, making the truck less stable when navigating haul roads. To mitigate the instability, operators often avoid filling their tanks completely. This means they need to refill more frequently, contributing to added downtime and increased fuel consumption as they backtrack to the water source.

Additionally, rounded tank designs contribute to water churning since there are no corners, edges, or obstructions to slow the water’s momentum. This constant, and sometimes rapid, water movement poses a safety risk for the driver and people nearby since the water can shift the center of gravity and cause the truck to become unstable.

Alternatively, water tanks with square corners minimize churning and have a larger capacity by simply not rounding off the sides of the tank. They also maximize productivity and operator safety due to their box-shaped structure, water baffles and water metering systems. The design also lowers the unit’s overall centre of gravity, enhancing stability and allowing drivers to safely fill the tank to capacity. The box-shaped structure makes it possible to haul about 20 per cent more water than rounded tanks, resulting in considerable time and cost savings.

For example, an operation may have three, 60-ton water trucks with 15,000-U.S. gallon rounded tanks in its fleet. Each truck works eight hours per day and sprays about one load per hour, using the rest of the time to drive back to the water source to refill the tank before setting out to spray again. Since the drivers feel the water surging, they typically fill the tank to 80 per cent capacity. By the end of each day, this water tank fleet would spray 288,000 gallons of water.

A quarry running the same trucks with square-cornered tanks can cover a much larger area with minimal backtracking. This is partly because each of the three, squared water tanks can hold 16,500 U.S. gallons, close to the truck’s true hauling capacity. The truck drivers in this example now can fill the tanks to capacity and also spray one full tank per truck each hour, but by the end of the day, this water tank fleet has sprayed 396,000 gallons of water.

Bafflingly High Safety
A water tank’s internal baffling system is another key element that affects safety and efficiency. Baffles inside the tank help minimize water from surging side-to-side and front-to-back. Almost all water tanks feature baffles, but many have large holes cut out to provide maintenance personnel access to the individual compartments. These openings allow water to surge between compartments, limiting surge protection and increasing the risk of the truck tipping or being involved in another type of accident.

To minimize surging, some tanks feature sophisticated water control systems that use baffling that runs from floor to ceiling as well as along the complete length and width of the tank, resulting in full compartmentalization of the water. Within the outer compartments, some manufacturers install side-surge stabilizers along the walls to prevent water from rolling or churning. The number of compartments can vary between tanks. For instance, a 58,500-gallon tank might have 42 or more individual compartments.

To offer the best level of water compartmentalization, these baffles require holes to allow water to flow freely throughout the tank, but they need to be small enough to prevent water from surging during use. To address this, some water tanks feature access doors that are about as tall as an average-sized worker to provide a more advanced solution than simply a hole near the ground in the baffle walls. These baffle doors, which technicians walk through easily, practically eliminate the need to crouch down while they maintain the tank, and the doors remain shut while the water tank is in operation. With access between multiple compartments, technicians have minimal concerns about working in confined spaces.

To allow technicians into the tank for maintenance, some manufacturers incorporate external doors, which can provide fresh air and natural light throughout the tank after opening all of the external and baffle doors. When the tank is empty and the inside needs servicing, technicians simply enter the tank and open the baffle doors. This system offers load stability as well as easy service and maintenance, allowing technicians to access the inside of the tank safely and easily, instead of putting off the difficult work for later.

The box-shaped structure of some water tanks makes it possible to haul about 20 percent more water than rounded tanks, resulting in considerable time and cost savings.

Philippi-Hagenbuch water tanks use baffling that runs from floor to ceiling, as well as along the complete length and width of the tank, resulting in full compartmentalization of the water.

For instance, individually controlled spray heads help water truck drivers optimize their water usage as well as minimize the chance of oversaturating haul roads, which can create slick driving conditions. Inside the cab, operators can turn on the individual spray heads — and in some systems, program a spraying interval. This optimizes water usage, so operators cover more surface area with minimal risk of making haul roads too slick for other aggregate equipment. Additionally, the added control and metering means they spend less time backtracking to a wellhead than a truck with a traditional water tank control system.

Water truck drivers also need to concentrate on their surroundings to ensure their safety as well as the safety of others. Taking attention off the task at hand can significantly increase the risk of an accident, especially when operating heavy-duty off-highway equipment. Components, such as simple water metering controls, also contribute to overall safety by allowing the water truck driver to better focus on his or her surroundings while driving.

Remote controls are one more way water truck drivers ensure their safety, especially when combatting fires. Traditional systems require the operator to use a joystick and view monitors inside the cab of the water truck to spray water onto the fire or spray down an area of a facility. Flexibility is key, which is why advances in technology now have some manufacturers offering remote-controlled alternatives that allow the operator to control the water cannon as far as half a mile away.

Built for Safety, In and Out
Efficiency and safety are also affected by maintenance. A tank with a flat top reduces the likelihood of slipping and falling when filling or servicing the truck. And trucks that feature lanyard tie-offs further enhance safety by providing an anchor point for operators if they were to fall.

Mechanics also need access to the tank’s interior to complete routine maintenance, such as clearing out sediment and debris. This can be a significant challenge with some tank designs. With many tanks, the only access point is through the fill hole on the top. The alternative is to cut a hole in the side of the tank using an acetylene torch, which creates sharp edges for those entering the tank to maneuver and requires a repair job after the maintenance is complete.

Alternatively, enhanced water tank designs eliminate this hassle and safety hazard by incorporating as many as three external access doors on both the front and back of the tank. When opened, the doors allow personnel to easily enter the tank and, with the aid of the baffle doors, have natural airflow and lighting for truck maintenance.

Designing tanks for minimal and easy maintenance is one way manufacturers help minimize the risk of injury for those servicing a water tank and its electric and hydraulic systems. For instance, some manufacturers use 450 Brinell steel — some of the hardest and most durable steel on earth — to achieve a long service life for the water tank. Mechanical pipe joining systems allow mechanics to replace damaged piping easily. They are able to remove the coupling’s collar, replace the pipe and tighten the collar to form a complete seal instead of having to weld on a rusty pipe, which can often take hours and equate to substantial downtime for the water truck. Other innovations feature hydraulic-powered water pumps that drivers can activate while the engine runs at any rpm, whereas most require a low rpm rate. This virtually eliminates the risk of overpowering a water pump, which is costly to replace.

Quarries are most profitable when equipment manufacturers make productivity and safety the core of their designs, especially for water tanks. Choosing a manufacturer that puts one at the expense of the other puts operations managers at odds with their superiors as well as their employees. However, choosing equipment that achieves its full potential and keeps workers safe ensures that quarries’ bottom lines stay in the black and everyone returns home safely every day.

Josh Swank is vice-president of sales and marketing for Philippi-Hagenbuch.