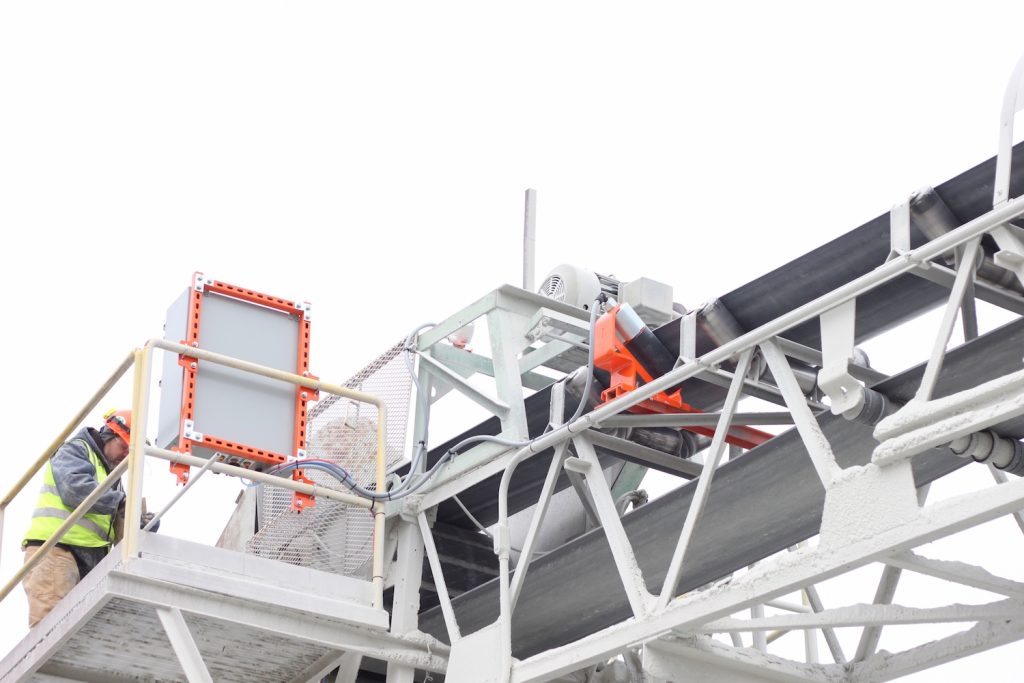 March 22, 2017 – In another move toward “smarter” material handling, a global conveyor technology innovator has introduced an automated pneumatic tensioning system for belt cleaners.

The new offering from Martin Engineering delivers precise monitoring and tensioning throughout all stages of blade life, reducing the labor typically required to maintain optimum blade pressure and extending the service life of both the belt and the cleaner.

Equipped with sensors to confirm that the belt is loaded and running, the system automatically backs the blade away during stoppages or when the conveyor is running empty, minimizing unnecessary wear to both the belt and cleaner.  The result is consistently correct blade tension, with reduced power demand on start-up, all managed without operator intervention.

“Pneumatic tensioners have some advantages versus mechanical construction,” said product development engineer Andrew Timmerman. “Mechanical designs work well as long as they are properly adjusted, but in many cases this requires periodic attention from maintenance crews as the cleaning blade wears down. Also, some operators will loosen a mechanical tensioner to reduce drag at start-up, which reduces the cleaner’s performance if not correctly re-tensioned afterward.”

The Automated Blade System (ABS) can be supplied in two variations, for locations with or without an existing power source. On sites with available power, the company will offer a 120/240V AC version of the system to power the system’s 24V compressor.  In facilities able to supply power and also compressed air to the head pulley, Martin can design the system so that the panel simply handles the “smart” portion of engaging and disengaging the cleaner blade.

For locations lacking convenient power access, the self-contained version uses the moving conveyor to generate its own electricity, which powers a small 24V DC air compressor to maintain optimum blade pressure at all times. Built around the patented Martin Roll Generator, the new self-powered version includes a proprietary storage system developed specifically for this application. With lead acid batteries to hold the energy, the system can produce ample power to drive the compressor, which maintains pressure in the reservoir to re-tension the cleaner as needed.

The generator can produce as much as 40 watts of power when running at maximum speed, which is sufficient to run components such as weigh scales, proximity switches, moisture sensors, solenoids and relays, as well as timers, lights and safety devices.  Wireless communication can be used to transmit directly to a central controller, giving operators a cost-effective way to access data that has not been readily available in the past.

When designing the new unit, engineers knew they needed more power than 40W to achieve the desired function.

“Although 40W is sufficient for low power devices like PLCs, sensors or LED lights, it falls short of powering high current draw devices like compressors or actuators,” Timmerman continued. “So the batteries supply the extra energy to power the compressor, which only needs to run for a brief period to maintain pressure in the reservoir.  The reservoir is then regulated to keep the cleaners at proper tension. The batteries re-charge during normal running of the belt, and they’re quickly ready to cycle again as needed.”

Both of the system’s regulated outputs can be individually adjusted to the desired pressure to tension multiple cleaners, such as a single primary with as many as three secondaries. The required cleaning pressure in any given application would be determined by which specific cleaner is in use, and can be adjusted to suit a wide range of competitive designs and brands.

Founded in 1944, Martin Engineering is the global leader in making bulk materials handling cleaner, safer and more productive.  The company supplies flow aids and conveyor products around the world for a wide variety of bulk material applications, including mining, aggregate, coal, cement, biomass and other materials.  The firm is headquartered in Neponset, IL, offering manufacturing, sales and service from factory-owned business units in Brazil, China, France, Germany, India, Indonesia, Mexico, Peru, Russia, South Africa, Turkey and the UK, and under exclusive license with ESS Australia.  For more information, visit or call (309) 852-2384.  Global representatives for Martin Engineering can be found at www.martin-eng.com/rep-finder.