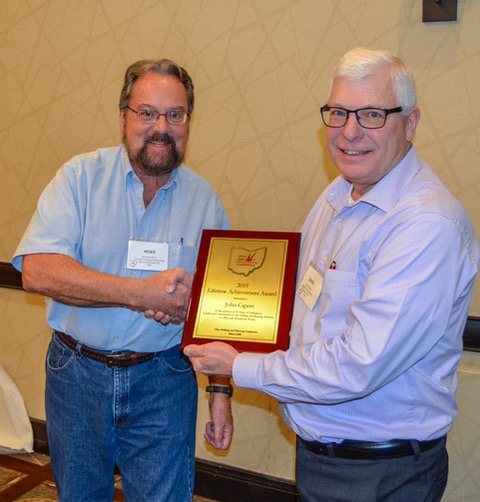 The Austin Powder Company is proud to share that technical manager, John Capers, was presented with the Lifetime Achievement Award from the Ohio Department of Natural Resources (ODNR), Division of Mineral Resources Management. The award was presented in March 2019 at the Ohio Drilling & Blasting Conference held in Columbus, Ohio.

During his 42-year career at Austin Powder, John has been responsible for training more than 1,100 new blasters globally at Austin Blaster’s seminars. Since the 1980s, he has been the ODNR’s sole instructor for teaching the surface blasting for coal and industrial minerals program, which is required to obtain blaster certification pursuant to Section 1501:13-9-10 of the Ohio Administrative Code. The Lifetime Achievement Award was presented by Michael Mann of ODNR to Mr. Capers in recognition of his long service as an instructor and his blasting expertise.

“Throughout John Capers’ career, he has been known by fellow employees, competitors, and customers for his strong knowledge of explosives and their application,” said Dave True, director of Austin Powder Company. “Mr. Capers is eager to share his knowledge and opinions even when they may not be universally accepted. Austin Powder and the explosives industry have benefited from his participation.”

John has not only spent his long career passing critical knowledge on to young blasters by conducting explosives training and technical presentations throughout the U.S. and internationally for many agencies, states, and organizations, he also served as president of the ISEE and as chairman of the Training Committee. He was an active member of the Institute of Makers of Explosives (IME) and a past chairman of the IME Technical Committee. He is also a member of the International Association of Bomb Technicians and Investigators.

John also received the ISEE Blasters Leadership Award in 2003. He served on the NFPA 495 and 498 Committee on Explosives and as a technical advisor and reviewer for many publications and programs.

“We are pleased that John has been recognized once again for his contributions to the blasting industry,” said Austin Powder Holding Company’s President & CEO, John D Rathbun. “Mr. Capers has been one of our key guys to help us with product and people development.  It’s great that the State of Ohio has recognized him in this way.”

Austin Powder is proud of John’s many accomplishments and of the meticulous work he has done with blasters to ensure safe, efficient, and effective blasting.