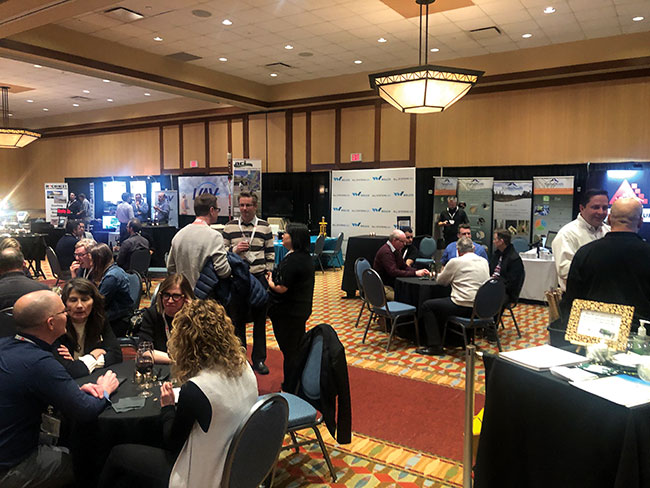 The Alberta Sand and Gravel Association’s (ASGA) 2020 Convention was a big win this year, hitting record registration numbers for the annual event that took place on January 8 and 9 at the River Cree Resort and Casino in Enoch, Alta.

“Reclamation certificate applications are currently managed through our compliance assurance division and it [length of application time] may be a combination of how many staff we have,” Perley said. In regard to security being returned, she added it should be very quick – 60 days at the most.

Jef McGee from Polydeck followed the Alberta team, giving a short presentation on screening technologies, the various screens available and how they can best be used by your team. McGee focused on wash, rinse, dredge and dewatering screens.

Noise mitigation for gravel operations
Patrick Froment from ACI Acoustical Consultants gave a talk titled, “Turn Down for What? Noise Mitigation for Gravel
Operations,” at the convention.

Froment explained what sound is, how it travels, what decibels are and what frequency is. He described frequency as another word for pitch – air molecules transferring energy.

After the short lesson on sound,
Froment doubled back to describe the role it plays at aggregate job sites during a project.

Froment shared several effective ways companies can better mitigate noise in areas where residents may become upset if it is too loud, distracting, annoying, or if it becomes obstructive in any way.

“The best thing you can do is pre-plan,” he said. “Education and interaction with impacted residents is key – getting the residents on your side as quickly as possible. From my experience it makes things a lot smoother.”

Froment added that it’s important to use previous experiences when determining how to plan at a new site.

“Just because something worked at one site, it might not work at another site,” he said.

He also said before beginning it is a good idea to get a Noise Impact Assessment (NIA). With an NIA you can determine the impact of topography, identify hotspots and have a better idea where you should place your equipment.

There are three main ways a producer can address excess noise. With the first one being the most effective – the source. The source is the machine or piece of equipment itself.

“If we can simply move the machine far enough away from an impacted area, or perform maintenance on it, that is the most effective way to mitigate noise,” Froment said. “Although sometimes it is not that simple.”

In that case, Froment suggests changing the path.

He said altering the path of noise should be practical and cost effective, and he explained several different ways sound can be directed up, absorbed or sent away from a receiver.

“Barriers, sounds, walls – all send noise up. And that’s called reflected sound, propagated sound or diffracted sound,” he said. “All of these methods help make the path longer; therefore, quieter by the time it reaches the receiver.”

Problems may arise with this method if topography is not working in your favour.

“If the receiver is higher than the source it can be difficult to mitigate noise and you will need a taller barrier,” Froment said, adding that you can’t get away with simply adding any sort of wall. “You can’t just add a tarp and hope it will help. Barriers need to have no gaps in between walls or at the bottom.”

He also mentioned that overkill is a thing and reminded producers to make sure they get the best bang for their buck. The third and final method is to move, relocate or make compromises with the receiver. Froment said that is often the most difficult and least effective method of mitigating noise.

Froment was asked what some of the measures an aggregate producer can take to reduce acoustic footprint are, and he said, “Go back to source. Maintain equipment. Be proactive and assume sound will be an issue and be willing to address it. Strategically place equipment to try to mitigate. But also know that some people still may just not like you being there.”

Attendees had the opportunity to check out some of the latest technologies and services for the aggregates industry during the trade show portion of the convention.

ASGA executive director John Ashton said the award is given to a gravel producer who exemplifies outstanding leadership and is involved with their community.

“Companies can make submissions online to us, detailing some sort of outstanding community involvement they’ve undertaken throughout the year,” Ashton said. “This year it was Inland’s race and obstacle course that received the award.”

Inland Aggregates website says the West Country Hearth Attack is a fun way of rallying families in support of their community. The event pushes its participants to navigate obstacles to reach a finish line, but ultimately, it’s what the event supports that makes it so meaningful. Community members from Villeneuve, Alta. participate in this race to raise funds for the West Sturgeon People Aging in Place Foundation. The Foundation is a non-profit that owns and operates West Country Hearth, an assisted living senior’s complex in Villeneuve.

“There’s no specific category for this award, it’s been left wide open, so you can put in applications for anything and I encourage you all to participate this upcoming year,” Gowdy said. “It can be on things like community relationships, stewardship, reclamation, safety.”

Majeau said the charity event was a complete success.

ASGA introduces new president
Joe Hustler is the incoming president of ASGA and he shared part of his vision for his next three-year term. Hustler lives in Grande Prairie, Alta., and is a forester by trade but has worked in the aggregate business for the last 10 years. He’s been on the ASGA Board of Directors for seven years.

“One of the main things I will focus on is unity within the association,” Hustler said. “We’ve got private producers and public producers, we’ve got counties and suppliers, so I want to pull everybody together and make the association both financially strong and effective.”

“Our first goal is to promote the aggregate industry in Alberta. Our second is to provide tools and opportunities for aggregate producers. The third goal is to make aggregate resources more accessible; and our fourth goal is to focus on the general health of ASGA.”

The new ASGA president is excited to lead the organization towards a better relationship with the Government of Alberta and said he has the perfect team to work with.

“There’s three past presidents on the board, so there is quite a bit of experience and quite a bit of help,” he said. “We work as a team well and two of the president’s live in Edmonton so we can schedule meetings in an efficient way.

“We’ve got a great opportunity here to work with the government,” Hustler said. “The government actually wants us sitting at the table, helping them make a new approval system. That’s probably a once in a 20-year type of opportunity — the government doesn’t make changes fast or frequently, so I think that’s really exciting.”

There are nine members on the ASGA Board of Directors, including Hustler. Hustler officially stepped into his new role when the convention ended.

Additional sessions presented at the ASGA 2020 Convention included a look at the Aggregate Producers Association of Canada; a Federal Fisheries Act update, an update from the Alberta Roadbuilders and Heavy Construction Association; an Alberta Environment and Parks ministry update; and salary replacements at the Workers Compensation Board of Alberta. There was also a trade show with booths and vendors set up to show attendees their latest technologies, products and services.