Features Company Profiles Roads & Paving
All in the family 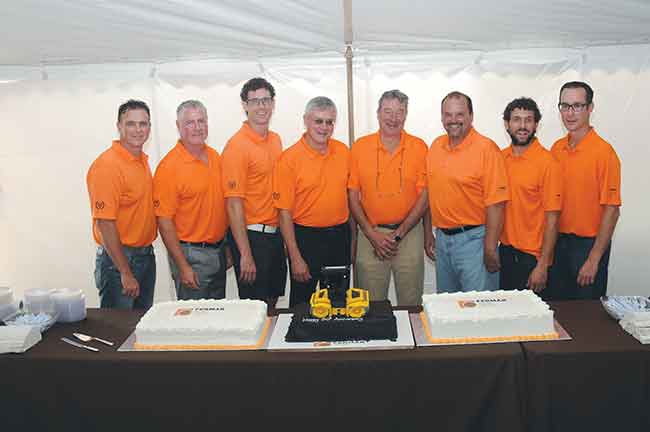 July 29, 2016 – As in other industries, asphalt companies are not immune to the advances of multi-nationals interested in expanding operations through the acquisition of successful businesses. Multi-generational, family-run companies, however, offer a particular level of experience, expertise and efficiency that is difficult to ramp up in a larger organization.

While consolidation provides some retiring contractors with a financially rewarding exit strategy after years of hard work, others are choosing to pass the reins on to the next generation, to carry on the tradition and reputation of the family business and to grow the company to new heights of success.

Ontario’s asphalt industry has numerous examples of companies with humble beginnings: single proprietorships that grew and expanded, moving from earth work and small paving jobs to winter maintenance work and multi-million dollar MTO highway projects; operations that started with a second-hand truck and grew to include a fleet of pavers and heavy equipment; or companies that became more self-sufficient through the acquisition of gravel pits, quarries and asphalt plants. Organic growth that was strategic and sustainable provided a solid foundation, and gave operators the capital and confidence to go after new opportunities.

Established in 1951, Toronto-based, Crupi Group, is a third-generation company founded by Dominic Crupi, which offers paving and road construction services through D. Crupi & Sons Ltd., as well as Halton Crushed Stone and Lee Sand & Gravel. Today the company is led by Crupi Group president, Cosimo Crupi, and vice-president, Dominic Crupi – the senior Dominic Crupi’s son and grandson. With 300 employees, three strategically located asphalt plants, and aggregate pits and quarries east and west of Toronto, the company has several competitive advantages, including the ability to offer quick service to GTA clients.

“There are several benefits to customers when they are dealing with a family-operated company,” Cosimo says. “When you own a company, you stand behind your product and work. You’ve got a tradition and reputation that you’re trying to uphold much more vigorously than if you were running a public company. Customers recognize this commitment and pride of work. They also know that they have access to the authority of a company with a simple phone call. We can respond much more quickly. Multi-nationals can’t offer this same level of service. They are great on huge jobs, but aren’t going to go after anything under $5 million, which is good for us and other smaller companies.”

Outside influences, including access to new markets, gave burgeoning companies in the 1950s and 1960s lucrative contracts and plenty of work. The Ontario government’s municipal grants under the Development Roads program in the 1960s helped to subsidize projects during the golden age of road construction in the province. Smaller contracting companies got a further boost, with the privatization of winter road maintenance in Ontario in 1996. By 2000, there were 700 managed outsourcing and area maintenance contracts awarded to 130 contractors with the duration of the contracts running from three to five years.

Outsourcing programs, both in Ontario and other provinces, have given next-generation companies the opportunity to transfer their skills and expertise to other jurisdictions.

“When Alberta privatized road maintenance, the province came to Ontario looking for contractors to bid on maintenance work,” says Steve Cruickshank, CEO of Kingston, Ont.-based, Cruickshank Group, and son of company founder, Les Cruickshank. “We went out to take a look and saw all of the construction activity that was going on. We purchased a business that provides equipment rentals to oil companies. We also construct ice roads, provide pipeline clearing and grubbing services and provide the oil industry with onsite emergency medical services.”

Growth through diversification has also been the strategy of Bruno’s Contracting in Thunder Bay, Ont. Established in 1970, this second-generation road and highway construction company expanded its operations to include aggregate and asphalt production, heavy equipment rentals, commercial and residential land development and leasing and property management for commercial, office and retail space. Bruno’s Contracting also developed Whitewater Golf Club – an international level golf facility that hosted the PGA Canada Tour in 2014 and 2015, and will again in 2016. The company is also involved in the operation and management of a vineyard and winery in South America, which is a global producer, with the capacity to produce up to one million bottles of wine each year.

“In the mid-1980s, we made a conscious decision to diversify into gravel operations, equipment rentals, industrial supplies, real estate holdings and land development,” says Silvio Di Gregorio, secretary treasurer of Bruno’s Contracting and brother of company founder and president, Bruno Di Gregorio. “In road construction, we used to operate across a very large territory, from the Manitoba border to Wawa, Ont. and up to Timmins, Ont. It’s a 1,000-kilometre stretch and, in the north, there are a lot of remote locations that you have to manage. No hydro, no cell phone service. And it’s risky, too. If a production specification is off due to faulty equipment, it can cost you $300,000 to $400,000 per day. Before, we used to do three or four highway contracts a year. Now we do one or two, closer to home.”

Although diversification and the accumulation of assets has helped smaller operations remain competitive, modern road construction offers new challenges to next generation companies. Tighter specification, new regulations and compliance issues have necessitated a higher level of expertise to navigate ever-changing policy, so that companies can keep abreast of government mandates and recommendations.

“You can spend a half a million very easily trying to get a quarry license and most environmental studies have up-front costs,” Les Cruickshank says. “Anytime there is a problem with a mix, there is a new compliance that you have to meet. It makes for a very complex environment, and larger companies have the resources to deal with these issues much more easily.”

While the pre-qualification of select bidders give smaller companies the opportunity to win contracts based on performance, rather than lowest bid, the process is time consuming and has ample paperwork involved, which again, taxes the in-house resources of smaller operations.

“A lot of municipalities are catching on and following the practice of using pre-qualified contractors,” says Kevin Martin, estimator and project manager for Etobicoke, Ont.-based Fermar Paving Ltd., and grandson of company founder, Armien Martin. “Performance rating gives municipalities the ability to separate performers and non-performers, so that they can deal with companies who are capable of doing the work. With pre-qualification, though, you have to prove yourself on paper, providing references and showing that you can be on schedule and meet safety standards. It lengthens the time of the tendering process; to pre-qualify, you are essentially preparing two tenders.”

Employee appreciation
Inherent in family-run asphalt companies is the high value that is placed on employees and an appreciation for their contributions to the overall success of organizations. They become a corporate family and include third and fourth generation workers, who continue the tradition of providing a strong work ethic, and invaluable knowledge and expertise. Employee retention is high, which saves on the training of new workers, and organizations gain a critical mass of expertise through employees’ combined years of experience. Greater efficiency and better quality work is the competitive edge that enables small companies to outbid larger organizations and still remain profitable.

“When employee retention is high, you have a much more stable work place,” Dominic says. “In the current climate of competition for workers, we try to engage our employees and keep them excited about their work. We have regular gatherings, which provide the opportunity for everyone to socialize outside of work. There is a lot of opportunity out there, so you have to keep your talented and valuable workers happy.”

Keeping employees happy includes having a steady flow of jobs in the pipeline to ensure that the work is there.

“By diversifying in all of our other organizations, we can provide a longer working season for our employees,” Silvio says. “When it’s slow in one area, we can move our workers to other jobs. Our employees are our greatest asset so we have to take care of them. This way, we can maintain and attract a better workforce.”

Since 2011, Cruickshank has been a winner of Canada’s Best Managed Companies program, which is a testament to Cruickshank’s commitment to its workforce of 500 people. Innovative initiatives include a Workers’ Input Network (WIN), which encourages feedback from employees, as well as a company newsletter that has been publishing for 25 years. Now retired, Les still offers guidance and advice, and hosts the company’s RoadKill Cafés, a travelling barbeque event that treats workers at various sites to a steak lunch throughout the year. Introduced in 2004, the RoadKill Café has provided meals for 8,000 employees, with lunches served up at 10 different sites so far this year.

Engaging employees also helps to narrow the generation gap and provide a smooth transition, when family members rise through the ranks of an organization and leadership is passed on from one generation to the next.

“At 16, we start out working for the company at the bottom – at the end of a rake – so, you earn respect from your fellow employees,” says Dante Di Gregorio, project manager and estimator at Bruno’s Contracting and Silvio’s son. “You only move onto the next level when you are capable. When I’ve worked with senior staff, I’ve always learned a lot from them, and they are open to new ideas as well.”

While larger companies have the flexibility and resources to dispatch employees to work sites over a wide geographic area, a smaller family-run business has the agility to respond more quickly to clients’ concerns and to switch gears and capitalize on new opportunities. A corporate culture that is born out of history, familiarity and trust extends to a workforce that is fiercely loyal, proficient and willing to go the extra mile to ensure the success of a project. Such a positive work environment is not only beneficial on a personal level, it promotes greater efficiency and competitiveness for an improved bottom line.

“Well-run businesses have planned succession at most levels of the business, including owner level, regardless of the consolidation noise going on in the background,” Martin says. “How do smaller companies compete? You have to try to stay entrepreneurial in nature and be nimble. Differentiate yourself in the market. Take all of the benefits that come with being a small family business and capitalize on that as much as you can.”

This article originally appeared in the Fall 2015 issue of ASPHALTopics, the official publication of the Ontario Hot Mix Producers Association.