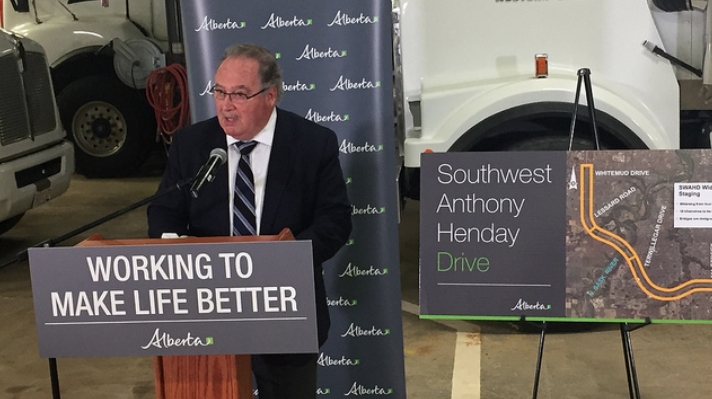 June 15, 2018 – Budget 2018 included funding to expand the southwest portion of the ring road from four to six lanes. With design work expected to be finalized later this year, construction for the project is expected to begin in 2019. It is anticipated that the project will take three years to complete.

Southwest Henday at capacity
The southwest leg of Edmonton’s ring road was designed for a capacity of 40,000 vehicles per day. Originally, this traffic volume was anticipated to occur in 2020. However, rapid development in southwest Edmonton resulted in capacity being reached in 2009. Today, that portion of the ring road carries approximately 80,000 vehicles per day.

“We know Edmontonians want to spend less time in traffic and more time with their families,” said Minister of Transportation Brian Mason. “That’s why we are making this crucial investment in a major motorway in this city. By widening the Henday, we will also be able to help businesses move their goods and services efficiently.”

The Anthony Henday Drive is a vital part of Alberta’s provincial highway network, improving market access and quality of life for Albertans and ensuring the long-term economic viability of the Edmonton metropolitan region.

“Southwest Edmonton is the fastest growing area of our city, and I know that today’s announcement will lead to relief for commuters using the route in the future as our neighbourhoods continue to be built,” said Tim Cartmell, Edmonton city councillor, Ward 9.

“The Government of Alberta’s commitment to our highway network supports job creation and develops opportunities in the construction and engineering industries. Our contractors are proud to work with government to improve our highway network, improve safety and keep Albertans on the move,” added Ron Glen, CEO, Alberta Roadbuilders and Heavy Construction Association.