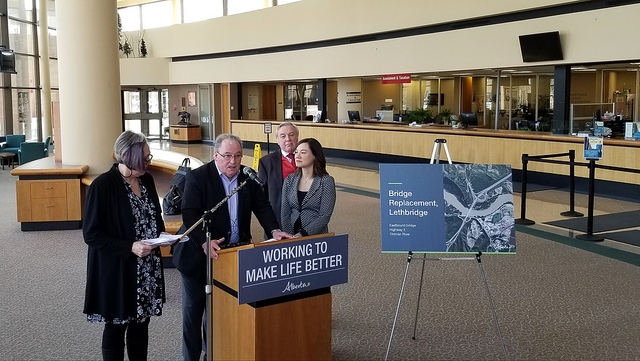 The eastbound Highway 3 bridge needs to be replaced to meet the needs of the growing Lethbridge population and to support critical commercial and industry activity.

In 2018 the government stepped up and rehabilitated the current bridge to ensure it was safe for users in the short term. The new bridge is a long-term solution that meets the needs of the community, with features like a pedestrian pathway.

Highway 3 is the major east-west corridor in southern Alberta between Saskatchewan and British Columbia. The Highway 3 bridge provides a vital connection between destinations in and around Lethbridge.

“Our government is committed to building strong, sustainable infrastructure across the province. This new long-awaited bridge puts safety first while ensuring Lethbridge commuters spend less time in traffic and more time with their family and community,”

“The Highway 3 bridge has been used by Lethbridge commuters for many years. With safety at top of mind, we are pleased the Alberta government is investing in these long-awaited improvements,” added Chris Spearman, mayor, City of Lethbridge.

Quick facts
•The eastbound bridge was originally built as a two- lane, two-way bridge in 1947.
•In 1966, a new westbound bridge was open to traffic that allowed for two lanes eastbound and two lanes westbound.
•The eastbound bridge was rehabilitated in 2018 to give it another 10 to 15 years of service life.
•Planning, design, acquiring rights of way, environmental permits and First Nation consultation are the next stages in the project.
•The project will support 308 direct and 221 indirect jobs.
•On average nearly 34,000 vehicles travel across the Highway 3 bridge in Lethbridge every day.