News
A successful partnership: company and municipality work together to get job done

Collaboration key to success for Lafarge and Sturgeon County 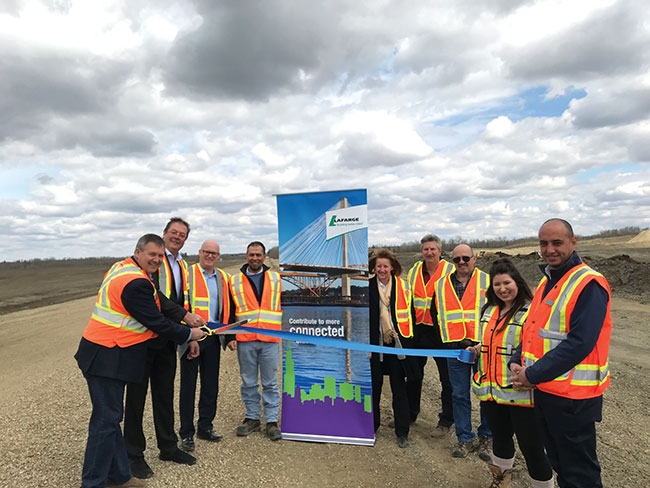 The key to many victories in life is teamwork. Most people have this drilled into their heads from early childhood all the way into adulthood from their teachers, coaches, employers, friends, colleagues, parents, children and significant others.

It’s no secret that collaboration between communities and aggregates producers isn’t always what one would hope it to be. From extreme NIMBYism (not in my backyard) to irresponsible land management before regulations were put into place, relationships between producers and many communities has been fractured with little trust built between the industry members and residents of many communities. But just because the relationship hasn’t always been ideal, doesn’t mean it can’t be repaired, and trust between producers and residents restored and improved. To hear about one great example of this, Rock to Road recently travelled to Calahoo, Alta., a small hamlet within Sturgeon County about a 30-minute drive northwest of Edmonton.

Lafarge Canada recently completed its aggregates extraction on the western portion of its Calahoo Pit, which was awarded the inaugural ASGA Award of Excellence in 2018. To extract the much needed aggregates – largely destined for the Edmonton market – Lafarge Canada needed to close an 800-metre segment of Campsite Road to local residents from December 2014 to December 2018 to facilitate the mining through and reconstruction of the road. Obviously, the news of a road being closed for a four-year period isn’t something typically received well by the general public. But Sturgeon County had a plan which would benefit all stakeholders.

The county was planning on widening and paving the section of Campsite Road between Highway 37 to Highway 633 – about a six-mile stretch of road, including a segment right through the Calahoo Pit – and thought this was a good opportunity to work with industry to come up with a winning scenario for all parties involved, which included: the public, Sturgeon County, Lafarge Canada, the Calahoo-Villeneuve Sand and Gravel Committee and the provincial government.

“The guys on the committee and the county staff are amazing to work with,” Gowdy says. “They all work together; it’s very constructive, not confrontational… I wish every jurisdiction worked collaboratively like this, to benefit everyone in the community.”

The Calahoo-Villeneuve Sand and Gravel Committee is comprised of two county councilors; three public members who live in the area; and representation from the major gravel extraction companies. The committee typically meets every two months.

“It provides a forum allows the public members to bring up concerns they’ve heard on the street; councilors can give updates on what has gotten approval from council,” says Sturgeon County senior industrial engineering officer Chris Pullen, who is also a member of the Calahoo-Villeneuve Sand and Gravel Committee. “It gives an opportunity for all three sides to discuss what our best solution is.”

Sturgeon County and Lafarge Canada ultimately came to an agreement that allowed the producer to close the section of Campsite Road by the Calahoo Pit for four years, so it could extract the aggregate from underneath the road.

“Available aggregate sources are being depleted rapidly,” Gowdy explains. “By allowing mining under the road, additional aggregate was extracted that would have been otherwise lost.”

Pullen says that the four-year closure ended up being about the right amount of time needed for the extraction to take place.

The decision to close the road and allow Lafarge Canada to extract underneath the road was beneficial to Sturgeon County, its area residents, and the Province of Alberta. The province, the owner of the aggregate in the road right-of-way, received royalties for the aggregate extracted. Sturgeon County received additional Community Aggregate Payments (CAP), which are applied to area community projects.

“The closure significantly benefited the rate-payers of Sturgeon County as Lafarge incurred the construction cost of upgrading this section of road to a higher standard, which the municipality would have otherwise been undertaken with tax payers money,” Gowdy says, adding that his company also donated the additional 20 metres of land needed on their property to facilitate the road widening and upgrading, rather than the municipality having to purchase the additional land.

Lafarge Canada contributed $500,000 of base work to Campsite Road and is contributing an additional $870,000 to future asphalt work for paving the road from Highway 37 to Highway 633 in 2020-21; for a total of more than $1.3 million in savings to the taxpayers of Sturgeon County.

Pullen says that Campsite Road has gone from an unimproved gravel road to a commercial road that can now be paved.

“We’re looking forward to moving forward with our portion,” he says, referring to the paving of the road outside of Lafarge’s property. “There are a lot of cost savings to working with industry.”

“It’s been a win-win for the community and industry to have that working arrangement,” adds Lyle Quintal of Calahoo Waste Disposal, who is a member of the Calahoo-Villeneuve Sand and Gravel Committee.

Quintal was very impressed with how Lafarge Canada worked with the community, particularly with its willingness to have open houses and receive community feedback; and by providing protection to residents’ well networks through the company’s groundwater monitoring program.

Quintal says having the water monitoring system in place means there is data being logged every day that can accurately state whether water is being depleted in an area or not.

Timelines
For Wayne Bokenfohr, Sturgeon County Councillor for Division 3, Lafarge Canada keeping to its timelines was of vital importance for the project to be a win for everyone involved.

“It was very important that they kept to the timelines and we’re very pleased they did,” he says. “Looking ahead five years they did a great job considering the amount of material that was removed.”

“I like how Lafarge stuck to its timelines, it did make sense in this scenario for opportunities for detours,” adds Dale Soetaert, land manager for Alberta and B.C. for Lehigh Hanson Materials Limited and producer representative for the committee. “The company saved money by not building a detour. The county saved money by not paying to upgrade a mile of road; short-term pain for long-term gain.”

The timeline was established through open houses between Lafarge Canada, local residents and Sturgeon County.

“Transparency was important,” adds Soetaert. “The decision makers can have all of the information and make decisions accordingly.”

Bokenfohr says that Sturgeon County looks forward to entering new agreements with other gravel producers, using the Campsite Road agreement as an example of how producers, the county and residents can all benefit from these types of arrangements. Sturgeon County is a very progressive county in regards to aggregates extraction. It has had a gravel extraction plan for nearly 18 years, which was recently recognized by The Federation of Canadian Municipalities. Bokenfohr says that he’s happy to meet with other municipalities across the province to help show them how to create similar arrangements with producers.

“It’s nice to be able to share this type of experience. A lot of provinces and counties always have nothing but problems,” he says.

In the end, all parties involved benefitted from the closing of Campsite Road for aggregate extraction, and there’s something that many municipalities can take away from this winning scenario.

“The road closure exemplifies a strong spirit of cooperation, and is an example of what can be accomplished to benefit all parties – public, municipality, province and industry – when we all work together to achieve common objectives,” Gowdy says.