Features Projects
A road to the Ring of Fire 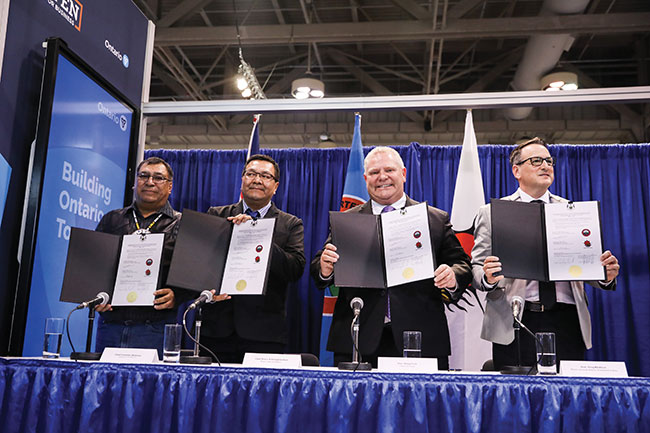 After many years of talk, the stars may finally be aligning for the building of an all-season, two-lane, gravel access road, culverts and bridges into the mineral-rich Ring of Fire area northeast of Thunder Bay.

Two First Nations communities in the area – Marten Falls and Webequie – have now signed a historic deal to advance planning of the link that will accommodate both passenger and commercial vehicles.

Ontario will help the communities with environmental assessments and planning for the project that will connect the Marten Falls access road in the south to the proposed Webequie supply road in the north.

“For us in Marten Falls, it’s very important for government to signify their intent to move ahead with the road,” says Marten Falls First Nation Chief Bruce Achneepineskum. “It’s a road we’ve been planning on for quite some time. It’s a huge undertaking that will affect our community and other communities.”

While there are still some hurdles to overcome before construction gets underway on the thoroughfare, he says the road will allow mining companies to further develop the area and provide jobs for generations.

“This is going to have far, far-reaching impacts and it’s a huge undertaking for us in Marten Falls,” he says. “That’s how we see it.”

An environmental assessment could take three years to complete, followed by an engineering study that would take about a year, so it will likely be four to five years before shovels are actually in the ground.

Achneepineskum says the COVID-19 crisis could change the timeline for the project but with governments indicating they will be spending on infrastructure he doesn’t anticipate much of a delay.

The Ring of Fire region, about 500 kilometres from Thunder Bay, covers an area of 5,000 square kilometres and represents one of the most promising mineral development opportunities in over a century.

There are deposits of chrome, nickel, copper and platinum group elements and other minerals in the region. The province figures the area has the potential to sustain up to 5,500 jobs annually across Ontario.

The link will form the final portion of a proposed north-south corridor. A first leg from Aroland to Marten Falls was announced earlier and consultations are underway for an environmental assessment. Construction of the first leg, aptly dubbed the southern link, is expected to be at least two years away.

There has been talk of a road into the Ring of Fire area for the better part of 15 years. The Progressive Conservative Party of Ontario has put the road on the radar again, though, by signing the agreement with the First Nations communities.

Premier Doug Ford says the deal is a crucial step forward to unlocking multi-billion-dollar opportunities in the area.

“After 15 years of delay by the previous government, we said we would build a road to the Ring of Fire, and we are working with our incredible partners in the Marten Falls First Nation and Webequie First Nation to do just that and make sure we do it right. Together, we can bring jobs and prosperity to communities across the Far North. Promises made, promises kept.”

Energy, Northern Development and Mines Minister Greg Rickford says the agreement represents an opportunity for the northern communities to rightfully share in opportunities that the link will provide.

“The Ring of Fire region represents one of the most promising mineral development opportunities in over a century,” he says, noting that the agreements will enable the province to move forward on building the road infrastructure.

“This is about more than just a road or a mine. We are building a corridor to prosperity that will improve the quality of life for First Nations communities by providing better access to economic opportunities, health care, education and housing supports.”

The province is working with the First Nations partners to move the project forward and build legacy infrastructure that will bring economic prosperity to the region, he says. “Our government made a commitment to open-up the incredible resources located in the Ring of Fire, and we’re keeping that promise.”

Along the way, the project has taken plenty of twists and turns. The province was blindsided at an announcement by the feds of a regional environmental assessment which had the potential to delay the project. Rickford was at first taken aback at the announcement. However, it appears the waters have calmed somewhat as the federal government has now indicated its work will not affect the project.

“The conduct of a regional assessment in the Ring of Fire area will not affect the legislated processes and timelines for the impact assessments of two road projects – Marten Falls community access road and Webequie Supply Road – that are currently underway,” Jean-Ridel Basigura, communications advisor for the Impact Assessment Agency of Canada (IAAC), wrote in an emailed statement on the issue.

He says the agency anticipates the proposal of future road infrastructure, mining development and other physical activities in the Ring of Fire area that may be subject to the Impact Assessment Act, and a regional assessment will inform and contribute to the effectiveness and efficiency of future impact assessments.

In late 2019, the agency received three requests to conduct a regional assessment in the area centred on the Ring of Fire mineral deposits in northern Ontario, he says, and last February the environment and climate change minister directed the IAAC to work with the province, Indigenous groups, federal authorities, non-government organizations and the public to determine the appropriate activities, physical boundaries outcomes and boundaries of the regional assessment and report to the minister in fall of 2020.

Basigura says the agency continues to develop the processes and plans that will be required to go forward with the engagement and other endeavours in the planning phase of the regional assessment.

Building critical infrastructure in the Ring of Fire region is important to support communities and future economic development opportunities, the spokesperson says. “Development of the proposed Northern Road Link will form part of the north-south corridor. The corridor will benefit local communities by providing reliable, all-season access, generate economic development opportunities for First Nations and increase the investment potential in the Ring of Fire region.”

The price tag for the road and exactly which government will pay what is still up in the air.

“Given that the proposed Northern Road Link is early in the environmental assessment process, it would be speculative and premature to outline any estimated costs to build the road,” the ministry spokesperson says.

Ontario’s position is that the cost to connect communities and the Ring of Fire area to the provincial highway network will require federal investment and the province has sent a request to the federal government seeking an overall equal cost-sharing arrangement.