Features Roads & Bridges
Roads and bridges: A race against time 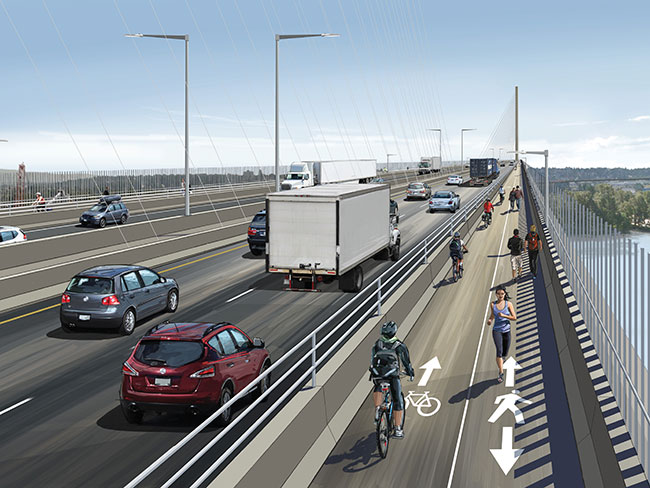 The replacing the old Pattullo Bridge is no doubt a critical priority, as the existing bridge sounds like a misery of problems.

More than 30 years past its 50-year design life, the Pattullo Bridge, opened in 1937, has been variously termed a “loaded gun,” “killer bridge,” and “the most dangerous bridge in the Lower Mainland.” But with the contractor chosen and geotechnical work underway, construction is set to begin this year.

“The new bridge is on track to open in 2023. Early works for the project (geotechnical and environmental work) started in May 2019, and construction site preparation works on the Surrey side started in July 2019… infrastructure construction [is] set to begin in the coming months,” British Columbia’s Ministry of Transportation and Infrastructure told Rock to Road.

Just when remains to be seen, as the design had, as of this March, still not been finalized.

“We are currently working with the contractor and cities of New Westminster and Surrey to finalize project designs,” stated the Ministry of Transportation and Infrastructure.

The province announced this February that it had selected Fraser Crossing Partners, a 50/50 joint venture between ACCIONA and AECON, to design and build the new four-lane bridge. According to ACCIONA, the total contract is valued at $967.5 million. The project budget is $1.377 billion, and will be funded, delivered and owned by the province, according to information provided by the Government of British Columbia.

The replacing the old Pattullo Bridge is no doubt a critical priority, as the existing bridge sounds like a misery of problems.

The new bridge will be located just upstream of the old Pattullo Bridge. Like the old bridge, it will have four lanes, but they will be wider (3.65 metres wide versus 3.05 metres wide on the old bridge) to better accommodate commercial vehicles, which reportedly must cross the line into oncoming traffic to navigate the bridge’s curved approach. It will also have dedicated walking and cycling lanes on both sides and separated from traffic.

Some, including the City of Delta, have asked what the point is of building a new bridge with the same number of lanes as the old one, albeit designed with the capability to be widened to six lanes. The British Columbia Trucking Association (BCTA) has pointed out, for example that the proposed design will see five lanes of traffic on the Surrey side become two, westbound lanes on the bridge, leaving motorists with the same bottleneck the bridge has now. This is not satisfactory, according to the BCTA.

“In order for the crossing to be fully functional, large-radius, grade-separated on- and off-ramps and interchanges are required on both sides of the bridge. Our understanding is these are not in the design on the south end where there will be no direct connection between Highway 17 and the new crossing. Southbound on the north end, the approach remains limited to one lane on McBride. This will do precisely nothing to address significant congestion during evening rush hour heading south,” says Dave Earle, president and CEO of the BCTA. 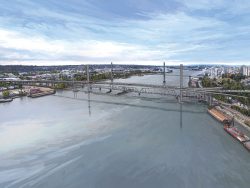 The new Pattullo Bridge will have four lanes, plus dedicated cycling and pedestrian lanes. Images courtesy of Province of B.C./Ministry of Transportation and Infrastructure.

He also says that the B.C. Ministry of Transportation & Infrastructure has held no meetings with user groups such as the BCTA, in which they could address their concerns about the four-lane decision, among other issues.

The proposal to build only a four-lane bridge leaves some sceptical about the point of the exercise. While the City of Delta declined a request this year by Rock to Road to comment about the four lanes versus four lanes plan, in a November 25, 2018 article in the Delta Optimist it left no doubt that it saw it as folly.

“There’s 77,000 vehicle crossings daily and it’s actually experiencing the highest rate of growth in truck volume of all the major river crossings in the Lower Mainland… Would any of us want to go through another year or two of them converting basically a brand new four-lane bridge after they realize there is a shortfall of capacity, then spend another year or two widening that out?” City of Delta engineering director Steven Lan was quoted to have said.

A bone of contention with some in the construction industry is that the bridge will be built under the B.C. Community Benefits Agreement (CBA) imposed under Provincial Crown corporation British Columbia Infrastructure Benefits (BCIB).

According to a website by the business law firm Blake, Cassels & Graydon LLP, “… the CBA will require employees on [infrastructure] projects to join a restricted number of trade unions.”

While the province casts the benefits of the CBA in glowing terms; e.g., improving access for women, First Nations and apprentices, others, such as the Canadian Federation of Independent Business, the Vancouver Regional Construction Association, CLAC, and the Progressive Contractors Association of Canada have variously called the CBA a “costly mistake,” “a terrible arrangement for taxpayers,” and demanded that it be scrapped.

“The government admitted that the undertaking of the CBA for the Pattullo Bridge would cost an extra seven per cent, or $100 million on the $1.4-billion cost,” explains Paul de Jong, president of the Progressive Contractors Association of Canada.

Because of the CBA’s added cost, he adds, “The scope [of the new bridge] is likely going to be restricted.”

As for the fairness, or not, of the CBA to the majority of the province’s construction workers, de Jong says, “The restricted group of unions specified in the CBA are only the traditional building trades unions. The CBA does not sample the broader suite of labour options; for example, non-union and alternative unions, such as CLAC. The building trade unions are just fifteen per cent of the overall work force of 250,000 construction workers in B.C. In the case of the B.C. CBA, 100 per cent of all the workers will have to join one of the building trades union.”

And as for improving access for some people, he argues, “Why not make this a general procurement provision? Instead, with the B.C. CBA, the B.C. government fosters hijacking by special interest groups… ends up with major infrastructure projects that cost the taxpayer more, and which stifles contractor innovation.

“In a dynamic work environment, a team of scaffolders can be trained to become a team of insulators. But in the building trade union world you can only practice one craft (trade) or another. The B.C. CBA will be superimposing this jurisdictional and rigid model on the Pattullo Bridge, removing the opportunity for workers to expand their skills and work more effectively and productively.”