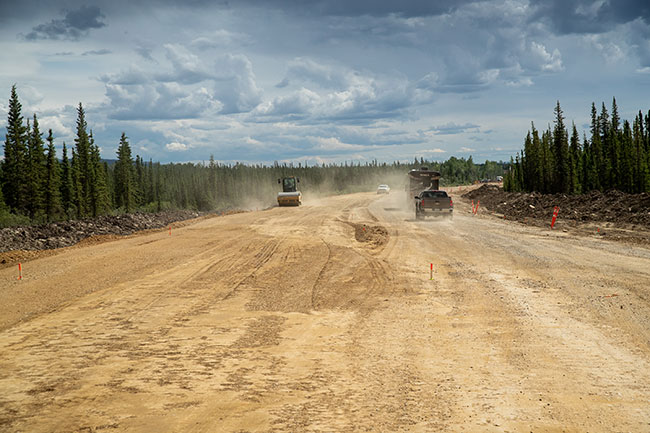 The Yukon’s North Klondike Highway is about to undergo Phase 2 of a massive rehabilitation project.

The project will involve the reconstruction of 110 kilometres between Carmacks and Stewart Crossing. The $180 million required for this phase of the initiative will come from the Government of Canada investing $135 million and The Government of Yukon investing $45 million, which is a 75-25 split in total project costs.

Paul Murchison, executive director of transportation engineering for The Government of Yukon, says the work is necessary to ensure residents that live outside of Whitehorse can access the surrounding communities.

“The North Klondike is a key route for people looking at accessing communities who live outside of Whitehorse; as well as those off the Klondike Highway that rely on portions of this route,” he says.

Large sections of the highway are extremely old and were built to less stringent standards than today’s highways. Add to that the wear and tear of a highway that deals with harsh winters, heavy mining trucks and thawing permafrost and the infrastructure starts to break down at a faster rate.

Murchison says this rehabilitation project will result in significant improvements to the foundation and overall resiliency of the highway.

“These improvements will reduce overall maintenance costs and increase efficiency,” he says. “When you look at industry here, and how industry uses this route, it currently has to deal with seasonal weight restrictions of 75 per cent in the spring. The highway improvements will eliminate those spring weight restrictions. This will benefit the commercial and industrial sector and has environmental benefits.”

Murchison says the primary reasons for heavier trucks on the road are for mining activities and for community resupplies with trucks hauling goods to Dawson City and other smaller communities.

“It’s also the only all-season road access for the bulk of the Beaufort Delta Region of the Northwest Territories like Fort McPherson. Those communities are resupplying on this route,” he says. “Inuvik relies on LNG (liquified natural gas), so those vehicles travel on this route as well.”

“When you construct a road now, you have your sub-base, base, and in this case, a bituminous surface treatment also know as chip seal. When this road was built, the base and sub-base were essentially non-existent in many of the sections. So, one of the key upgrades we get here is foundation strengthening,” Murchison says. “This will provide that better performance – especially under vehicle loads. This is one of the ways we eliminate those seasonal weight restrictions. That better foundation will also be better at draining water in the spring as the snow melts and the ground thaws.”

Another concern that will be addressed by these upgrades will be the widening of the shoulders in many sections of the highway.

“We will get some safety improvements by having the additional road width and flattened embankment slopes, where we have fills – lots of the existing embankment slopes are steep on this route. Some of the vertical curves are steep so you’d be cutting through some of those hills where there are steeper grades and filling in some of the low areas to get improved highway geometry,” Murchison says.

Work on the highway will vary, depending on the condition and location of a particular section. 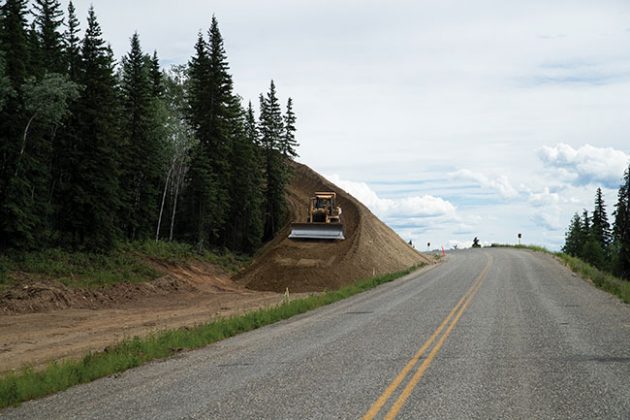 It is estimated that the North Highway Klondike rehabilitation project will support
approximately 800 jobs over the construction period. Photos courtesy of Government of Yukon


The project is currently undergoing the environmental and regulatory process and approvals for the project.

“Timelines aren’t fixed in stone, but the intention is to be positioned to tender a contract at some point during 2022. Not necessarily have significant construction happen next year, but tendering by next calendar year and have construction fully underway in 2023,” Murchison says.

The funding for the project extends to the 2027-28 fiscal year. The estimated project completion date is within the 2027 construction season. The construction season in The Yukon is significantly shorter than most regions of Canada.

“The good window for road construction is getting out after the May long weekend, and, if weather is good, they can start a little bit earlier. But if it’s been a cold and wet winter they may start later. At the end of the season, everyone is winding down end of October, although winter can come earlier or later. Typically, we have a five-month construction season window,” Murchison says.

Murchison adds that the project will likely incorporate winter work.

“One of the areas where there’s work that can be done efficiently in the winter is any clearing that has to be done for right of ways and preparation for the next season’s work. There’s a fair bit of vegetation in our right of way, so it will need to be cleared for construction,” he says.

Aggregate production, although not ideal, will often happen throughout the winter in The Yukon.

“We’re not looking at placing base or sub-base materials but moving cuts and fills could be happening in the winter as well,” Murchison says. “I’d expect those final structural products to always be going in during the summer season because you need to get that compaction.”

It is estimated that the North Highway Klondike rehabilitation project will support approximately 800 jobs over the construction period. Murchison believes there will be significant opportunity for local employment.

“In my opinion, working in The Yukon requires that local knowledge,” he says. “It’s difficult for a contractor to do a remote job without the understanding of the local environment. I think our local contractors, as we ramp up, are set up to be very successful.”

The Yukon has Indigenous policies in place that are a significant part of the government’s procurement processes. There are several First Nations communities living within the surrounding areas where the construction work will take place.

“There’s a significant First Nation consultation piece that goes along with this project as we plan and move to implement this project. As we look at environmental assessments, engaging with First Nations throughout the project is essential. We can’t successfully move forward with these projects without those consultations on the impact on the First Nations,” Murchison says.

This article appears in the September/October edition of Rock to Road. Read the digital edition.