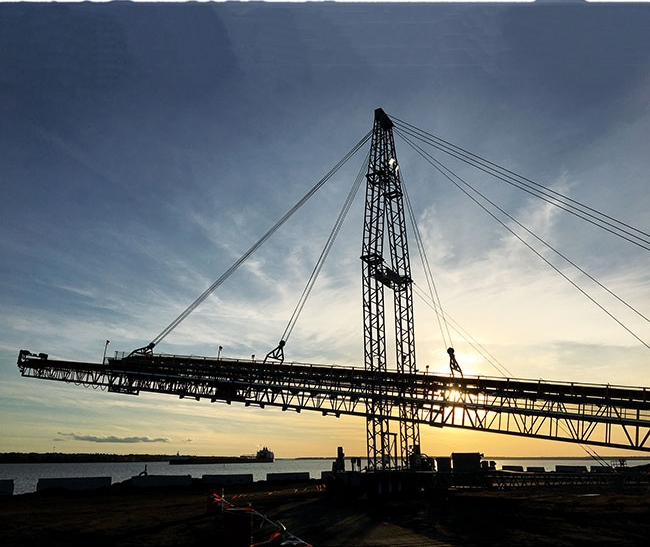 Algoma has been a manufacturing staple in Sault Ste. Marie, Ont. for more than a century. The fully integrated steel producer of hot and cold rolled steel products is the largest employer in the area and builds steel for a wide variety of manufacturing, automotive, construction, mining, energy, ship, rail and military applications around the globe.

But with all of those steel products comes a large quantity of marketable by-products from the steel making process. Many of these by-products are placed on barges via a shiploader and shipped to various clients in the concrete, and metals industries.

When the company’s shiploader started failing back in September 2016, Algoma saw the problem as an opportunity to expand its by-product shipping operations. To help find a new long-term solution for loading the barges, Algoma reached out to Assinck Limited in Scarborough, Ont. and asked them to travel to the loading site to evaluate and redesign the aged shiploader. The re-design needed to enhance the mill’s loading capabilities so that it could broaden its shipping market and get bigger loads to clients.

“A critical part of the design was to improve loading times,” explains Dean Glenn, vice-president of Assinck, adding that Algoma’s major concern was the cost associated with the amount of time a barge is at their dock. “We wanted to ensure not only the success of the finished product, but increased production and profitability of the new shiploader’s operation.”

The project took four months to complete from the conceptual stage to final design. In the end, Assinck provided a turnkey solution with the design and build of a radial stacking, telescoping loader.  The new loader features a cable hung design with an average loading capacity of 2,935 short tons per hour (TPH) based on a density of 100 lb./cubic foot (2,662 metric TPH) and an impressive 228-foot reach. The gross weight of the new shiploader is 204,000 lb., which is more than 100 tons.

The biggest challenge over the course of the project was designing and building the machine around the existing machine’s footprint.

“They requested a larger machine with increased capacity, and that’s what we delivered,” Glenn explains, adding that the new shiploader has decreased Algoma’s loading times by about 30 per cent. “At Assinck, we don’t just build for the success of our client’s projects, we guarantee it”.

State of the art
The shiploader is state-of-the-art and is equipped with PLC controls and built-in redundancies supplied by Allen Bradley; and has HMI touchscreen controls for ease of usability.

When designing the shiploader, Assinck built redundancies into every aspect they could think of, including double motors and double gearboxes on every function. To ensure ultimate safety, emergency stops and belt stops were installed end to end.

With Algoma’s new shiploader up and running, loading rates are up and the company’s slag and other by-products are on their way to finding new uses at facilities across Canada, much of which will find its way into Canada’s
various  infrastructure projects in the form of cement.