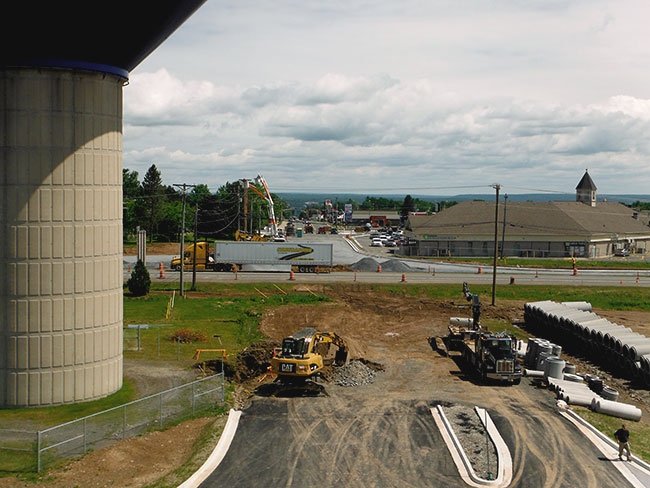 Fredericton, N.B. has embarked on its fourth, and by far most ambitious roundabout. Its location on the province’s Route 8 joins two city streets and relieves congestion on two other overtaxed throughways.

Traffic equivalent to the entire population of Fredericton – 60,000 cars a day – swarm Hanwell Road and Regent Street. They cross the four-lane, divided Route 8, which runs along the south edge of the most built-up area of the city. Parallel to and roughly midway between Hanwell and Regent is Smythe Street, cut off by Route 8 from Bishop Drive on the other side; the roundabout will connect Smythe and Bishop.

After years of planning and training drivers on three other one-lane roundabouts in the city, the city broke ground this June on a two-lane roundabout smack in the middle of Route 8. The city completed extensive improvements to the adjacent, Smythe/Prospect and future Smythe/Bishop intersections in 2014.

When completed this September, the new roundabout is projected to draw 10,000 cars on the first day from beleaguered Hanwell and Regent to the new crossing.

The two million dollar project, awarded to KDB Engineers/Contractors Inc., posed several challenges, solved in the course of years of planning. Not insignificant was getting buy-in from the province, on whose Route 8 the roundabout will sit. “The province had to approve this, which was not easy,” says Charters, who gives credit to the consultation provided by Phil Webber, a roundabout expert with GHD Engineering. “Phil Webber is <i>the</i> guy to talk to in Canada about roundabouts. He provided advice and was critical in our meetings with the province. Our safety experts were huge in this as well, which was key to getting approval.”

Safety was a big issue, both in creating a fail-safe transition into the roundabout from a highway on which cars typically travel at 110 km/h, and in teaching local drivers how to properly navigate a two-lane roundabout.

To announce to drivers speeding along Route 8 of a major changeup, it will be reshaped into what is called an urban cross section, for about 250 meters east and west of the roundabout. The lanes will be reshaped into reverse curves, also known as speed scrubbing curves. The median will be raised to above the level of the lanes. “The speed scrubbing curves, along with the urban cross section, have proven to be very effective,” Charters says.

Curbing, lighting and signage will also signal to drivers that they are entering a new, urban-like environment. This is known as a gateway, “… a defined entrance point that is usually much different that the cross section proceeding an urban environment … intended to signal to the driver that they must slow down …” as Charters puts it.

Signs are one thing, but Charters explains that the extensive reshaping of the lanes and medians sends a much more effective message to the brain. But why not simply opt for the ultimate solution, the tried and true overpass?

Unlike older roundabouts with flat centre islands, this one will have a raised island. “If you can see past the roundabout as a driver, you may not be prepared to stop, but when you see something raised in front of you, you are more inclined to slow down. Raising the centre is relatively new. Our highway safety experts told us this is critical. Blocking the view helps the roundabout function better,” Charters says.

The education of local drivers in roundabout etiquette has been going on elsewhere in the city for years, even as Charters has been guiding the current project through its many hoops. Knowing that this roundabout was coming, Fredericton built three other, one-lane, “training” roundabouts, so to speak, in 2010, 2012 and 2013.

“Building the earlier roundabouts was intentional as an educational tool. We found a location for a small one first. We started small on purpose. Let people get used to them. I would have never thought of putting a roundabout here first. It was very strategic [to build those other three first],” Charters explains.

Educating the public on this particular roundabout is a work in progress. Every time Charters talks to the media about it, he educates. The media has been “fantastic” in helping get the word out. “We will most likely use all types of media to introduce new signage and how to navigate the multi-lane roundabout. The main message here will be that drivers must treat the roundabout exactly the same way they currently treat a large, multi-lane intersection. In other words, the key is to select your lane based on what direction you want to go (left, right, through) in advance of the intersection. We will also be using material information (schematics and videos) supplied from other jurisdictions,” Charters explains. As an example, he cites the Region of Waterloo. “It is probably the roundabout capital of Canada.”

The roundabout will have an inscribed diameter of 59.1 m, with two 4.5-m lanes and a 40.1-m diameter central island. Because the distance between the intersection of Smythe and Prospect, which runs parallel to Route 8, and where the extended Smythe intersects with Bishop is only 270 m, keeping the traffic from backing up is critical.

“The operation of the intersections at Bishop and Smythe makes it challenging to allow traffic to flow smoothly through the roundabout as there is a potential for vehicles to back up into the roundabout,” Charters says.

The backing up would be caused as cars wait to exit Smythe and turn left onto Bishop while cars turn left off Bishop onto Smythe. Charters describes how this will be prevented. “Traffic signals will be installed at this intersection. The most critical aspect of the operation of these traffic signals is to ensure that vehicles [waiting to turn left onto Bishop] do not queue back into the roundabout. This will be done by detection systems that will detect when vehicle queues are approaching a problematic length. They will activate the signals to clear that queue. Double left turn lanes [from Bishop onto Smythe] will also increase the capacity of the high volume left turning traffic to clear the intersection.”

In addition to relieving traffic on Hanwell and Regent, Fredericton chose this project over others because it is economically strategic. Bringing more traffic onto Bishop will help the area develop, Charters says. “As soon as we put the roundabout in, it will develop more.”