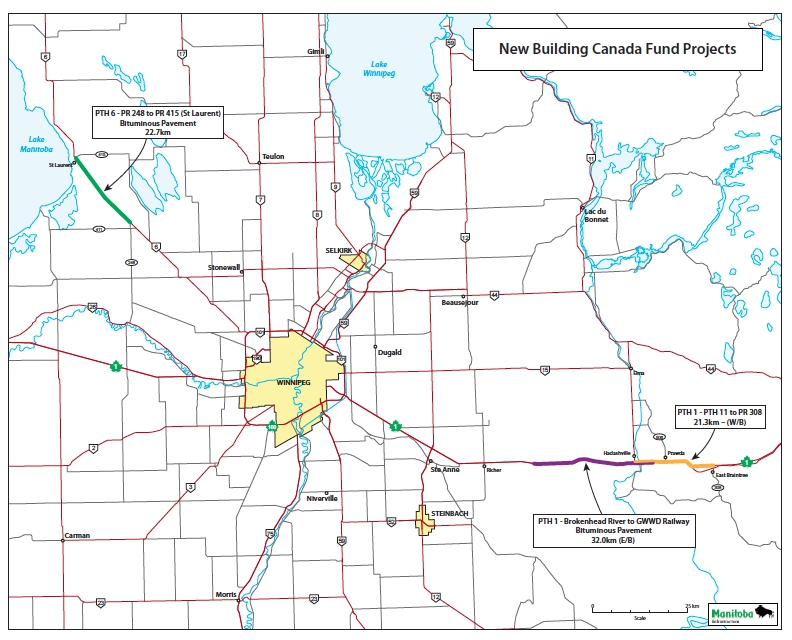 August 25, 2016 –  Provincial Trunk Highways (PTH) 1 and 6 in Manitoba will be getting $53 million in joint funding for major rehabilitation projects.

The funding announcement was made by Minister of Manitoba Infrastructure Blaine Pedersen and Doug Eyolfson, MP for Charleswood-St. James-Assiniboia-Headingley, on behalf of the Honourable Amarjeet Sohi, Minister of Infrastructure and Communities.

Representatives for the province stated that in addition to making these highways safer and wider, this rehabilitation work will extend the life of these assets by approximately 20 years.

“We are proud to work with our federal partners on maintaining public safety and improving the quality of our highways in Manitoba,” said Pedersen. “Each of our highways connects communities and enables economic activity across our large and diverse province. Highway 6 is a gateway to northern Manitoba, connecting our communities in the north to the capital region of our province. Highway 1-East is also an important lifeline for Manitoba servicing high volumes of traffic over a busy stretch of the Trans-Canada Highway.”

“The Government of Canada is pleased to be partnering with the Government of Manitoba to invest in much needed upgrades to the National Highway system in the province,” said Eyolfson. “This work will provide a more reliable and safe ride for both Manitobans and visitors, stimulate economic growth and contribute to the high quality of life Canadians want and expect.”

Both highways are essential parts of the National Highway System in Manitoba.  PTH 1 is the only highway that connects eastern Canada to western Canada, while PTH 6 provides an important connection from Winnipeg to Northern Manitoba.

“Manitobans have told us that infrastructure is their number one priority,” said Chris Goertzen, president, Association of Manitoba Municipalities, who participated in the announcement today.  “These projects will promote safe, efficient travel and allow greater economic opportunity into our municipalities, while at the same time linking communities to each other.”

“We support and welcome anything that promises to make our roads – our workplaces – safer,” said Terry Shaw, executive director, Manitoba Trucking Association.  “Safer roads means safer drivers and that is of benefit to everyone in our province, from those behind the wheel right down to those who are relying on the goods they transport.”

The PTH1 project will rehabilitate two sections of the highway: grade widening of a 21.3 kilometre stretch from PTH 11 to Provincial Road 308, and resurfacing a length of 31.8 kilometres from Brokenhead River to the Greater Winnipeg Water District Railway.

The PTH6 project will rehabilitate the pavement on a section of roadway from Provincial Road 248 to Provincial Road 415. The work will also include intersection improvements and other safety upgrades, such as paved shoulders with rumble strips.