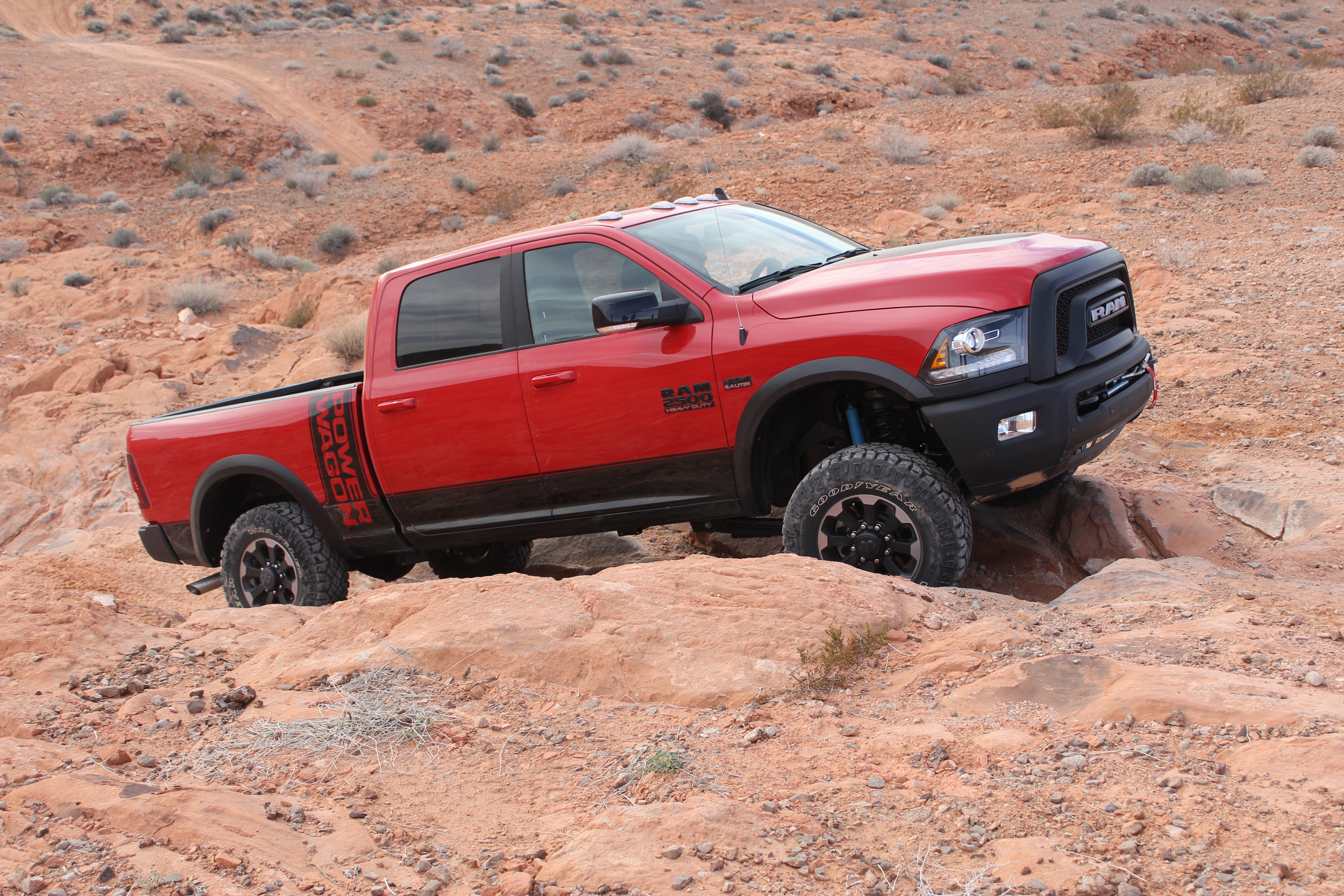 August 23, 2017 – Describing the Ram Power Wagon as “new” is peculiar; even though the 2017 model is just that. This truck’s basic design is over 70 years old. Mind you the terrain it’s meant to conquer is much older than that; so in this case the “new” is irrelevant.

The Power Wagon is unique in that it’s a specialized pickup truck right out of the factory, versus trucks being modified by upfitters across the country.  For many “off-road” industries it’s often the perfect fit right off the dealer’s lot.

The Power Wagon is a product of the Second World War. More than 255,000 of these 3/4-ton 4×4 trucks saw service. These trucks were so successful at navigating European and Pacific battlefields that after the war Dodge engineers used this truck as the basis for their civilian Power Wagon models. Introduced in 1946 with a new cab and a purpose built 8-foot cargo box, it rode on a 126-inch wheelbase chassis and featured a 230 cubic-inch flat head six-cylinder engine, a two-speed transfer case, a four speed transmission and also had power take off (PTO) capability to operate auxiliary equipment. It was produced (with very little change) till 1968 when new light-duty truck safety regulations in the United States made the almost 30-year old cab obsolete; though production for export continued for almost another decade. Of note for collectors, in 1966 a short-lived Crew Cab model was added – now those are rare.

Fast-forward to 2005 at Chrysler’s Chelsea proving grounds in Michigan where an earthen presentation podium blows apart to reveal a new Dodge Ram Power Wagon. It roared out onto the presentation carpet covered in dirt and sporting a name that hadn’t been riveted to a Dodge fender in over 25 years. This was the rebirth of the modern Power Wagon. Since then it has dropped the Dodge name – it’s now part of the Ram standalone brand – but the purpose of this HD truck remains the same – go where no other factory built truck dares.

For 2017 the standard engine is a 6.4L V8 Hemi that makes 410 hp and a peak torque of 429 lb-ft. A unique feature of this engine is an electronic calibration that softens the throttle response when in 4WD-low, yet raises the idle speed by 100rpm to increase low-end torque.

Driving this truck through the Nevada desert inspired an almost reckless confidence in my ability to climb obstacles that would make a goat sweat.  Even through the soft sand the aggressive tread of tires floated the truck, though that’s when I appreciated the 6.4L’s torque that churned out of these traps. Sharp rises and deep gulleys didn’t impede the truck either; its height (14.3-inches of clearance) and steep approach (33.6 degrees) and departure (26.2 degrees) angles prevented hang-ups. Then again, that’s why it does have an integrated front mounted winch and massive tow hooks.

After pushing the truck through worsening dry washes, I was thinking I couldn’t find a spot that would get it stuck. I’m sure there was one but I never did find it. However, a word of caution, just don’t drive it fast! Unlike the Ford Raptor, which is designed to cover rough terrain quickly, the suspension on the Power Wagon is setup for slow and steady – at speed it’s rough. But then speed is not its purpose; this stiff setup lets it climb steep, jumbled rocks with a surefooted ease; while carrying a crew and substantial payload. Hence, the reason it’s a favourite of forestry and fire services throughout North America. It features a payload of 1,510 lb. and a tow rating of 10,030 lb.

During our off-road drive (in a public-lands designated off-roading area of the desert) the only other vehicles we met with were heavily modified Jeeps and ATV’s. It’s a compliment to the Power Wagon’s engineering that it can keep up to this company off-road; yet at the end of the dusty day it drives home, comfortably, on the highway.

So, while the core engineering of this truck changes little over the years, there are new esthetics and comfort features.

In fact the entire truck shows very little chrome. Instead primary colour schemes are set off with front and rear bumpers that are matt-coloured and powder coated. The exception is the 17-inch forged, multi-surface aluminum wheels with Silver outer and Matte Black inners.

The blacked-out theme continues on the flanks, where wheel-arch moldings, badges, mirrors and lower body panels create a distinctive appearance. At the rear a 324-point bold original font “RAM,” is stamped into the tailgate with blacked-out lettering. A black “Power Wagon” decal crosses the bottom of the tailgate. With this package there will be no question of what you’re driving.

From what I saw in Nevada, today’s Power Wagon is also following the current pickup trend of packing more and more upscale content into trucks.  That’s fine for many buyers, however it should be noted for those that value ability more than luxury Ram does offer the Power Wagon as a base Tradesman Crew Cab 4×4 model. Although this option does not include the same interior and exterior design elements, it does include the same unique off-road equipment, including the winch, lockers, larger tires, electronic disconnecting sway bar, suspension and under-body armor. Monotone paint covers this package. The grille-surround and inserts are from the Tradesman model and are colored Black as are the headlamp filler panels and wheel flares.