Looking at infrastructure investment in Canada 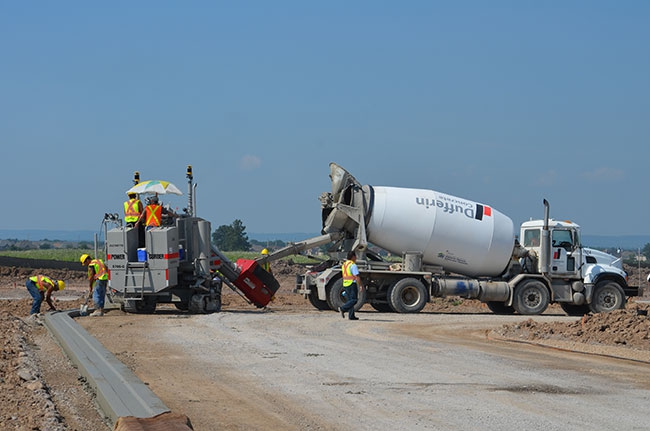 Most governments in Canada are making slight increases to infrastructure spending, but that isn’t going to be enough to put a dent in this country’s infrastructure deficit.

Most governments in Canada are making slight increases to infrastructure spending, but that isn’t going to be enough to put a dent in this country’s infrastructure deficit.

According to the 2014-15 edition of the Global Competitiveness Index, released by the World Economic Forum, Canada ranks 15th out of 144 global economies. The Index sizes up the economies focusing on productivity and quality of institutions based on input from 13,000 global business leaders.

One of the key reasons cited for Canada’s drop is the quality of aging roads and infrastructure throughout the country. Canada ranked 19th overall in infrastructure, and 23rd in quality of roads.

The Federation of Canadian Municipalities estimates that $123 billion is needed to bring crumbling infrastructure to good conditions, and an estimated $115 billion in order to meet growing demands.

Current investments
For their part, the federal government did announce the new 10-year, $53 billion Build Canada plan in February of 2014. The Plan is broken down into four sections: $32 billion for community infrastructure, $14 billion for the New Building Canada Fund, $1.25 billion for the P3 Investment Fund and $6 billion for existing infrastructure programs. It represents the single largest financial commitment to infrastructure in Canadian history.

But that record commitment wasn’t enough to satisfy the demands of the provinces, as this past year saw two meetings of provincial Premiers that ended with a call for an even greater commitment of infrastructure monies from the federal government. In early November New West Partnership Premiers Brad Wall of Saskatchewan, Christy Clark of British Columbia and Jim Prentice of Alberta called on the Harper government to provide an extra $1-$1.5 billion in additional funding to “… support and enhance essential port and transportation infrastructure.” Three months earlier, Ontario Premier Kathleen Wynne and Quebec Premier Philippe Couillard made a similar demand, however, they did not attach a price tag to the strong request for additional infrastructure funding. Premier Wynne has since followed up by recommending the formation of a National Infrastructure Partnership that would aim to spend five per cent of Canada’s annual GDP on infrastructure.

Without question, each of the provinces is struggling to keep up with infrastructure construction and rehabilitation while attempting to keep deficit and debt under control. Here is a look at the funding commitments for transportation infrastructure in the individual provinces and territories in 2014, and what trends are being established long-term.

However, we don’t yet know the fiscal fallout of the drop in oil prices that has put a dent in the province’s budget. Depending on how long the price of oil stays under $60 a barrel, the infrastructure budget for Alberta could decrease significantly.

Saskatchewan
The Government of Saskatchewan has increased its budget for highway construction and rehabilitation for this fiscal year. The province spent $576 million on its 26,000km highway system in the 2013-14 budget year. That number rose to $664.5 million, an increase of 15.4 per cent over the previous year.

Manitoba
In March of 2014, the Government of Manitoba introduced a plan dedicating $5.5 billion to infrastructure over the next five years. Of the $5.5 billion, $3.7 is committed to roads, highways and bridges.

It should be noted that Manitoba made a strong commitment to infrastructure renewal just two years ago when it controversially raised the provincial sales tax from seven per cent to eight per cent to help provide more money for infrastructure spending. The increase was implemented on July 1st, 2013.

Quebec
The Quebec government introduced its 2014-2024 Quebec Infrastructure Plan last year, which commits a total of $90.3 billion over the next decade to projects throughout the province. Of that $90.3 billion, $20.4 billion, or 22.6 percent, is allocated for the province’s road network.

Also the Northern Plan Fund, which is endowed $63 million for the 2014-15 fiscal year, will be used to pay for road infrastructure work that includes the extension of Highway 138 and the repair of Highway 389 in Côte Nord and the James Bay Highway.

Newfoundland and Labrador
The 2014 road construction season saw the Government of Newfoundland and Labrador execute $194 million in road work contracts, including $82 million spent on the Trans Labrador Highway. In total, transportation spending for 2014-15 is estimated at just over $217.2 million as compared to $149.5 million the previous year. That represents an increase of 45 per cent year over year.

New Brunswick
New Brunswick will also see an increase in transportation infrastructure funding in the upcoming year, as the provincial government announced its plan to spend $409.5 million for infrastructure in the 2015-16 fiscal year. The $409.5 million includes a $16.2 million increase in funding for provincially-designated highways in municipalities.

Prince Edward Island
Spending for Transportation Infrastructure and Renewal in P.E.I. dropped this fiscal year by 2.9 per cent. The 2013-14 budget was $101.5 million compared to $98.6 million for the 2014-15 fiscal year. No clear reasons were stated for the drop in the budget, however the province is struggling to keep overall spending under control.

Nova Scotia
Province-wide spending cuts will take its toll on infrastructure spending in Nova Scotia in 2015. In early 2015, the government announced that it would be
cutting overall spending by eight per cent in 2015. For the transportation infrastructure industry, that will mean a reduction from $235 million spent in 2014 to $220 million in 2015, or a decrease of 6.8 per cent.

Yukon
The 2014-15 fiscal year will contain the largest transportation infrastructure budget in territory history in the Yukon. The Government of Yukon has committed $85.264 million for transportation, including $48.17 million for highway work and $14.23 million for bridge work.

The Yukon Government is also actively lobbying the U.S. to provide funding for the 1977 Skahwak Agreement in order to improve the North Alaska Highway and the Haines Road at an estimated cost ranging from $237 million to $340 million.

Northwest Territories
The Government of Northwest Territories is currently in the midst of its Corridors for Canada III – Building for Prosperity transportation plan. The strategic plan involves $600 million over 10 years for transportation infrastructure. The average $60 million is more than double the commitment made in Corridors for Canada II, which saw $200 million spent over seven years.

Overall, just two provinces have committed less funding to transportation infrastructure for the current fiscal year versus the previous year.

Challenges ahead
There are challenges that could affect the current spending rates experienced in each of the provinces. As mentioned, the drop in the price of oil is a detriment to Alberta and Newfoundland and Labrador. That could reduce infrastructure in both of those provinces. However, it will provide relief, albeit temporary, for logistics budgets for both aggregate producers and road construction contractors.

There is also the increased debt load being carried by most Canadian provinces. Nova Scotia has already cut funding, and other provinces like Ontario and Quebec could easily follow suit depending on public perception of current debt loads.

Housing starts are expected to be comparable to 2014 according to CMHC, with housing starts expected to range between 172,800 to 204,00 with a point forecast of 189,500. However, financial institutions like RBC have predicted that the housing market could take a noticeable hit should interest rates rise in 2015.

This year is also an important one when it comes to elections. Saskatchewan, Manitoba, Newfoundland and Labrador, P.E.I. and the Northwest Territories are all scheduled to hold elections in 2015. A change in leadership could potentially have a negative, or positive, effect on infrastructure budgets.

Speaking of elections, all Canadians will head to the polls in October for a federal election. While it is not clear at this point what impact a Liberal or NDP government would have on infrastructure spending, it could put the current size and scope of the Building Canada Plan in limbo.

As our roads and bridges continue to fall into growing states of disrepair, 2015 will again be an important year in defining provincial and federal commitments to the improvement of transportation infrastructure and the reduction of our national infrastructure debt.